It wouldn’t be a CES without an array of splashy new displays and other notable items from Sony Electronics.

This year in Las Vegas, the company managed to raise the bar on its usual flair for the big show. During its wide-ranging press conference, which covered everything from TVs and audio to gaming, live sports broadcasts and 5G (you can watch the video below), Sony rolled out an automobile onto the stage.

“This prototype embodies our contribution to the future of mobility and contains a variety of Sony’s technologies,” Sony president and CEO Kenichiro Yoshida said in introducing the vehicle.

Sony’s ‘360 Reality Audio’ provides a deep and immersive audio experience through speakers built into each seat to encapsulate passengers in sound, according to the company. Meanwhile, the front seats face a panoramic screen displaying content and an intuitive user interface.

Of course, it’s just a prototype, but Yoshida noted all the manufacturing partners involved and said the company will continue to pursue the initiative.

Meanwhile, keeping pace with competitors such as Samsung and LG in the world of OLED, LED, 8K and 4K displays, Sony showed what’s on tap for 2020.

That includes aspects such as a “Netflix Calibrated Mode” that optimizes the HD, 4K and 4K HDR video content quality from the popular streaming service.

“This lineup offers incredible new features to optimize the consumer experience and continue to deliver the creator’s intent in both 4K and 8K resolution.”

The 2020 displays employ Sony’s Picture Processor X1 Ultimate and TRILUMINOS Display technologies. These help ensure image clarity and rendering subtle nuances of color, light and gradation, according to the company.

New models also have Sony’s Sound-from-Picture Reality, which aligns the position of the sound with the images on the screen for greater realism. And along with Netflix Calibrated Mode, the displays are IMAX Enhanced to ensure 4K HDR and DTS performance of IMAX-scale content.

“Here at CES, we are helping users connect with their favorite creators’ work,” Yoshida said. “Our new Bravia TVs, for example, feature 8K detail matched with acoustic audio for an immersive experience.”

Sony’s new OLEDs and LEDs also introduce what the company calls Ambient Optimization, a new Acoustic Auto Calibration technology that detects where the customer views their TV from during initial setup and calibrates sound quality based on the environment.

In terms of aesthetics, the TVs offer Sony’s new Immersive Edge design, with a “minimalist stand” that doesn’t distract or detract from the experience.

Aesthetics, Voice Controls Among Other Features 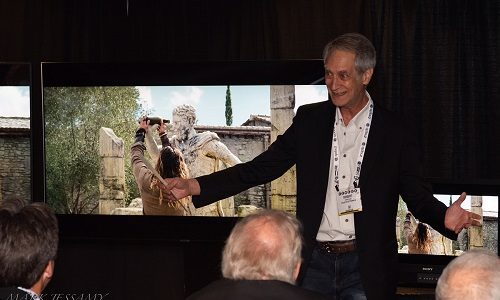 Sony says pricing and retail availability for the new TVs will be announced this spring.