While they didn’t have to empty out hotel rooms, hop on return flights and sift through physical swag bags, members of Nationwide Marketing Group “left” Virtual PrimeTime more prepared than ever for the upcoming holiday shopping season and the months beyond. Held October 27-29 and set around the theme of “Outwork. Outwit. Outwin.,” members showed their grit and resiliency, taking advantage of every meaningful opportunity presented to them during Virtual PrimeTime as they keep pushing forward through these unprecedented times.

From the comfort of their home stores, Nationwide members engaged with the educational and business platform at a record-setting pace. In just three days, more than 3,200 attendees from nearly 1,300 companies engaged with the Virtual PrimeTime platform an astounding 51,000+ times. That includes more than 15,000 educational sessions attended and 35,000+ vendor booth visits.

With that many booth visits, the 110 participating vendors averaged roughly 320 booth visits each. In addition, more than 23,500 chat messages were posted across the Nationwide Virtual PrimeTime platform, including more than 1,100 messages in the main Attendee Lounge area, where members were able to network.

Those numbers will continue to rise, though, as the Virtual PrimeTime platform will remain open for attendees to go back and view most educational sessions and keynote presentations through November 13, 2020.

“Thinking back to where we were as an industry when we left Houston in February, 2020 hasn’t played out like we all anticipated it would. But given what the country, the economy and our industry has been through, we’re also in a lot better shape than many would have predicted a short eight months ago,” Nationwide president and chief member advocate Tom Hickman says.

“Some major hurdles were thrown at our members, but so many of them turned those challenges into opportunities for their businesses. Together, our dealers have fundamentally changed the face of American retail.”

A major component of that change has been the push for digital services, as retailers continue to find ways to serve their communities safely during the ongoing pandemic. Back in March, as states began to enter extended periods of lockdown, Nationwide dealers reached out in droves to Retailer Web Services and Site on Time in order to amp up their digital offerings. And retailers’ efforts around digital — including expanded website features, adding chat, turning on online shopping carts and more — have paid off tremendously. During the height of the lockdown in May, members saw their website traffic up more than 300% year-over-year, and that number continues to average around 150% to 200% today.

Beyond digital services, members were exposed to the power of data during Virtual PrimeTime. At this show, Nationwide announced updates to the PriMetrix platform that simplify members’ ability to receive their market analysis data on-demand, whenever they want or need it. The new digital interface, available through MemberNet, allows access to that data and the entire suite of PriMetrix offerings.

That includes the Assortment Rationalization Tool (A.R.T.), which made its PrimeTime debut during a keynote on the Main Stage. There, Nationwide’s Director of Retail Merchandising Mike Collier presented the tool and explained how appliance dealers are leveraging A.R.T. to make data-driven decisions to optimize their product mix and improve their margin potential.

Members who attended Virtual PrimeTime, like at past in-person shows, were able to capitalize on countless show specials and CashBack opportunities made available by Nationwide’s exhibiting vendor partners. That included a modified Palooza experience, which created an entire afternoon of limited-time and limited-quantity deals from select of vendors.

Consumer electronics dealers had access to more than $10 million in inventory made available only to them through major vendors such as Samsung, LG, TCL, Hisense, Konka and others. Additionally, Virtual PrimeTime saw a record number of CE vendors participate in the show, with members receiving record-setting CashBack payments per dealer.

And on the appliance side, vendors in the category reported some of the most diverse and engaging new-dealer signups than they’ve ever seen during Virtual PrimeTime. New product introductions were made by a number of major vendors in the space, including GE Appliances, Electrolux, Whirlpool, LG, Samsung, Element and others. Virtual PrimeTime also saw the first-ever special purchase allowance program from Element, giving dealers access to strong margin enhancement opportunities.

“Our members have been on the front lines of this pandemic since early March, adjusting their businesses on the fly and adapting to every challenge thrown their way,” says Melissa Stenson, Nationwide’s vice president of member experience. “We simply followed their lead and found a way to bring this resilient community together. Virtual PrimeTime was only a success because of the tremendous efforts and commitment of our member and vendor communities and their willingness to adapt with us.” 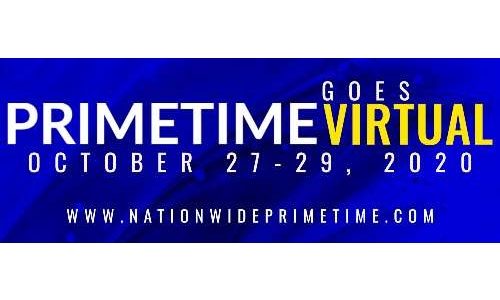 Giving back was also a major component during Virtual PrimeTime. Despite not being able to gather in person and physically pack meals for No Child Hungry, the second day of the show was dedicated to helping provide meals to kids in need in the Las Vegas community — where the Nationwide family would’ve gathered for this show. In the end, Nationwide donated 100,000 meals to help feed hungry children across the United States.

Virtual PrimeTime’s momentum carried into the first week of November when Nationwide Marketing Group held the single largest giveaway in the history of the Independent retail channel – a $100,000 store makeover.

On Thursday, November 5 Nationwide Southwest member Ron’s Lumber & Home Center of Howe, Oklahoma, was selected from a pool of nearly 500 members who qualified for the giveaway. Ron’s now has the opportunity to use the winnings to upgrade either their website, their physical store or a combination of both. The Facebook Live event drew more than 120 viewers during the live show and has garnered nearly 2,000 views in a little less than a day.