Curious to know more about biophilia and wellness technology? Read up on these key terms to help make the learning process a little easier.
CE Pro Editors 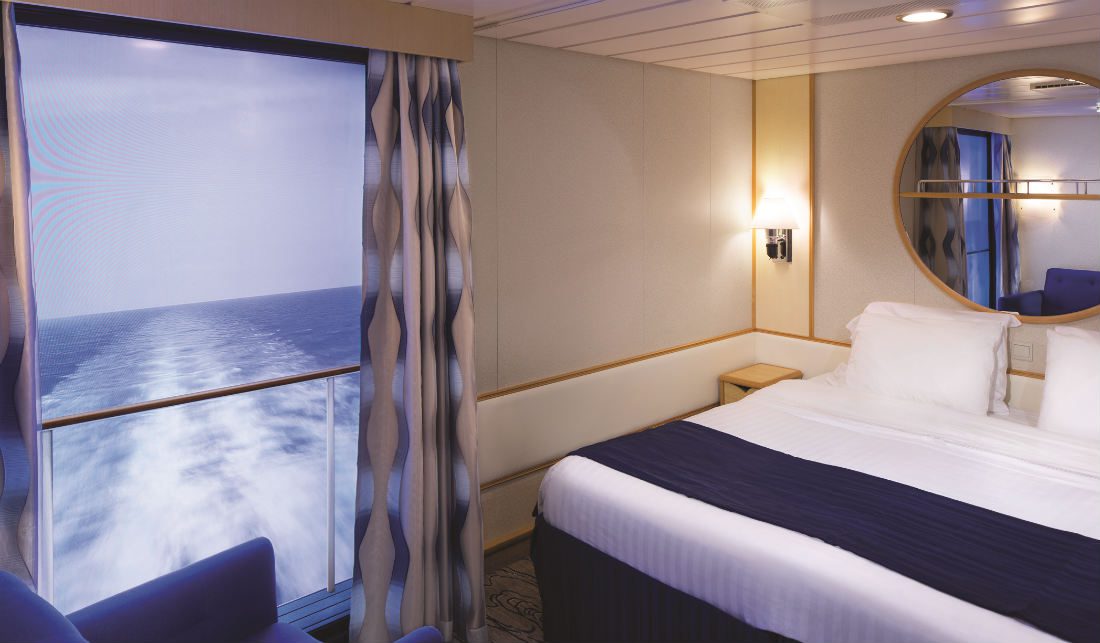 Being connected to the outdoors improves a person's mood. At Royal Carribean Cruises, some cabins are equipped with "virtual balconies" (pictured) that project outside images of the sea for guests.

Biophilia is an intimidating word. While it may sound like something out of a college applied biology textbook, fear not, as wellness stalwart Julie Jacobson has rounded up some key terms all integrators should know before reading into or installing digital wellness technology.

Biophilia — Literally, the love of living things, biophilia has come to represent our innate connection to nature based on hundreds of thousands of years of evolution. (Erich Fromm, 1960s)

Biophilic Design — In response to nature deprivation, a growing army of architects, designers, scientists, building managers, the medical community and so many other constituents are embracing biophilic design – bringing nature into built environments.

Biomimicry or Biomimetics — The emulation of natural forms, processes and ecosystems for any number of purposes, including sustainability, problem-solving, biophilia, aesthetics and more.

Biodigitry — Because of the overly broad implications of “biomimicry,” CE Pro coined the term biodigitry to refer to simulations of nature through electronic or digital means, for example human-centered lighting and artificial skylights. In June 2019, CE Pro launched the Linkedin group Biodigitry: The Intersection of Biophilia and IoT. (http://bit.ly/biodigitry)

WELL Building Standard — A performance-based system for measuring, certifying, and monitoring features of the built environment that impact human health and wellbeing, through air, water, nourishment, light, fitness, comfort, and mind. The standard is administered by the International Well Being Institute (www.wellcertified.com).

WELL AP — A credential to indicate that one has been trained and certified on the WELL building standard.

Diurnal — Diurnal can mean two different things: active during the day (opposite of nocturnal) or exhibiting daily patterns, as in 24-hour day/night cycles, which is how the term is used in biophilic camps.

Forest Bathing — Roughly translated from Japanese (森林浴 or“Shinrin’yoku”), forest bathing is being in the presence of trees. Forest bathing – or simulations thereof – has been shown to lower heart rate, blood pressure, and stress hormones, and boost the immune system.

Off Gassing — Occurs when manufactured products release volatile organic compounds (VOCs) and other chemicals into the air the you breathe.  New mattresses, carpets, furniture all have some off gassing.

Circadian lighting / human-centric lighting — Lighting systems that maximize human wellness by tapping into the cycles that our bodies naturally follow (our circadian rhythms) and simulate natural light based on the time of day, thereby minimizing the negative effects.

Entrainment — A natural phenomenon in which one entity resonates synchronously with another in response to its dominant frequency of vibration. If you’re coming into the industry from the a/v space, then you’re probably thinking about music but think broader. Everything in life has a rhythm…. the blood pumping through your veins, the cadence of your breath, the sound of water flowing, etc.  Our internal rhythms slow down or speed up to match external ones.

Suprachiasmatic Nucleus (SCN) — A tiny region of the brain in the hypothalamus, situated directly above the optic chiasm. It is responsible for controlling circadian rhythms.

Intrinsically Photosensitive Retinal Ganglion Cells (ipRGC) — Non-visual photoreceptors (as opposed to rods and cones) in the eyes that detect ambient light and play a significant role in supporting circadian rhythms.

Melatonin — A hormone that’s made by the pineal gland in the brain, melatonin helps control your daily sleep-wake cycles. Your body’s internal clock (Circadian Rhythm) influences how much melatonin the pineal gland makes, and so does the amount of light that you're exposed to each day.

Serotonin — A chemical produced by nerve cells that stabilizes mood, reducing depressing and anxiety, and helps with eating and sleeping.

Pineal gland — Is a small endocrine gland in the brain that produces melatonin, a serotonin-derived hormone which modulates sleep patterns in both circadian and seasonal cycles.

Stochastic Process — Randomly determined. Humans evolved to live in stochastic environments as seen in nature – critters, wind, the motion of trees and the shadows cast by clouds. Static environments like many offices are create fatigue and stymie productivity.