This home theater includes four 65-inch Samsung screens on either side of a 134-inch Stewart Filmscreen with images from a JVC projector. 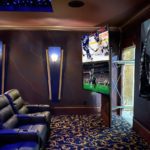 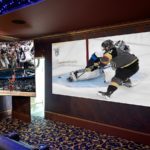 Holy home theater, Batman! It’s one thing to have a dedicated home theater, but it’s on a completely different level to incorporate five individual screens in one space, and a hidden door for the equipment room. But that’s exactly what Pure Custom Integrations in Mississauga, Ontario, Canada, did for a homeowner who is equally obsessed with sports and Batman.

This dream theater can transform from a classic movie theater to a sports bar-style setup with the push of a button. Fans are able to watch their favorite team or movie on a Stewart Filmscreen 134-inch Balon G2 borderless Microperf Firehawk screen with the option of watching additional events on one of the four Samsung 65-inch curved TV screens. 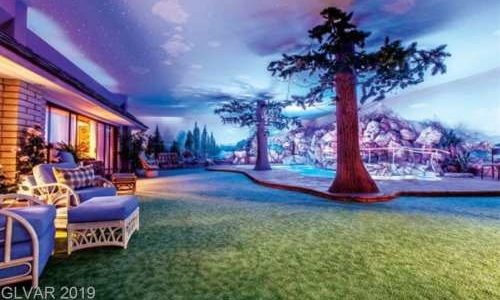 The main screen shows images from a Native 4K JVC DLA-RS2000 projector that is completely hidden away inside the ceiling. During the installation, the Pure Custom Integrations team installed the screen and tested the Motorized Lens Shift of the JVC Projector to make sure the screen was mounted at a comfortable height without having the image cut off or compromised.

The homeowner can swap sources using Control4 to control a Just Add Power 4K video distribution system, just like at a real sports bar… only more comfortable. The sources include five satellite receivers, Nvidia Shield TV, Apple TV or a 4K Samsung Blu-Ray Player. The additional displays allow the kids to watch a movie while listening on Bluetooth headphones while the parents can watch the big game.

The Blu-ray player is located in the cabinet of the concession stand so the the homeowner can physically change discs with ease, while grabbing a snack, without having to enter the server/equipment room.

Speaking of the equipment room, the entrance is behind a secret door. The two TVs on the left side of the big screen are mounted on the door itself.

“The beautiful paint job incorporated the speakers and blended them into the walls of the theater allowing the guests to enjoy the sound without having to look at many speakers,” says Richard Juras, owner of Pure Custom Integrations.

From a control standpoint, the Batman home theater is operated with a Control4 remote, on-wall keypad or any phone or tablet in the house linked to a Control4 EA-5 with OS3 smart home controller. The on-wall keypad is located by the entrance of the theater to allow the client to turn everything on by the push of a button or even off at night.

“We chose to use Control4 as the main control method and were able to simplify the use by pressing a button on the C4 lighting keypad dimmer which turns on the four Samsung 65-inch curved TVs and the JVC Native 4K Projector tucked away out of sight without compromising quality,” adds Juras.

“The client had the dream of being able to watch multiple sports at once with their close family and friends, while still being a great home theater experience using the latest technology that’s available and being able to showcase some of his love for Batman,” says Juras.

With three rows of five seats, there’s enough room for 15 to sit comfortably in the Batman home theater. Outside the theater there is a display showcasing various Batman memorabilia collected over the years.

“The client wanted the ability to watch the latest 4K Blu-rays and be able to access his personal movie library on any of the TVs or the projection screen itself. The star ceiling and fully stocked concession stand with real movie theater popcorn makes this the theater the place to be, regardless if it’s to experience a great movie or catch the latest games,” adds Juras.