With an array of brands under its umbrella, Sound United is always busy with product innovation and new offerings for custom integrators, and the company recently spoke with CE Pro about its fall plans.

With the venerable Bowers & Wilkins brand now under the Sound United umbrella, the company made a big splash with its latest launch, the 800 D4 Diamond Series.

“These speakers have been highly anticipated … and have been met with great fanfare,” Krakowski says of the latest iteration of the British audio maker’s iconic 800 Series lineup.

“But that’s just the tip of the iceberg when it comes to the brand and what we have coming to market,” he adds of what sounds like a busy fall and winter time at Bowers & Wilkins, which has been enjoying success recently as the pandemic has spurred home entertainment and music consumption.

The company has also revved up its auto audio offerings with a recent announcement that BMW will feature B&W – the famed automaker’s new iX electric vehicle will have a Bowers & Wilkins Diamond Surround Sound system, carrying over that Diamond heritage.

Definitive Technology ‘Getting Back to Its Roots’

In terms of Sterns’ areas of Definitive Technology and Polk Audio, there is plenty happening as well, he notes.

“We’ve got some things going on, kind of changing the focus of the brand,” he explains, noting the brand’s 30-year-old history and hallmarks such as bipolar dispersion patterns, value proposition and, of course, audio quality. “Great, thrilling sound experiences.” 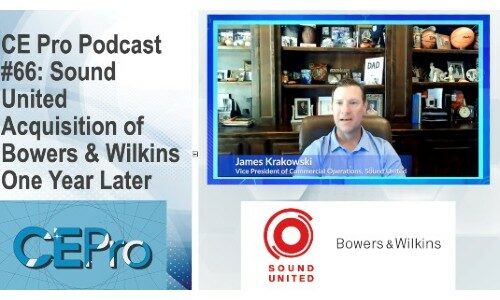 His focus since taking over as president of the brand has been on getting back to its roots – “performance, sound, technology, value, specialty distribution” and more supporting core categories such as subwoofers, soundbars with Sound United’s HEOS platform, 2-channel audio, home theater and architectural audio and outdoor technology.

Sterns says Sound United will have a demo program for dealers to support the product offerings. Additionally, he teased some upcoming introductions that harken back to his other audio stints that include Niles Audio so integrators can expect more news, likely in the architectural category in which Niles specialized, in the near future. Hear more from Sterns and Krakowski in the video above.