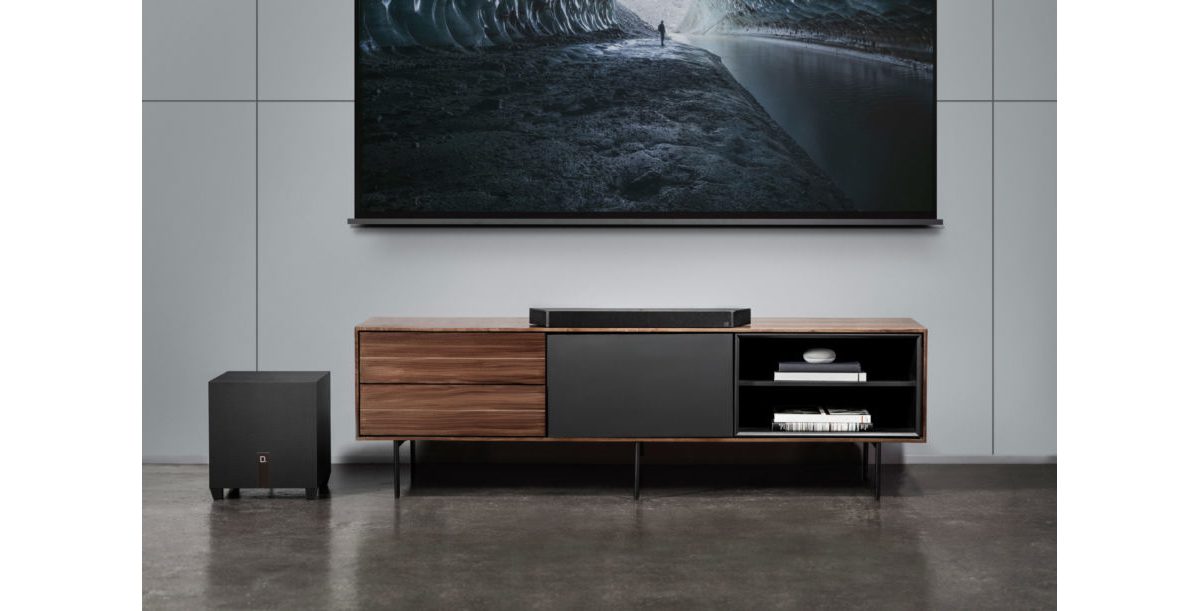 The Definitive Technology Studio 3D Mini Soundbar is a two-piece system that features a wireless 8-inch subwoofer and multichannel soundbar. 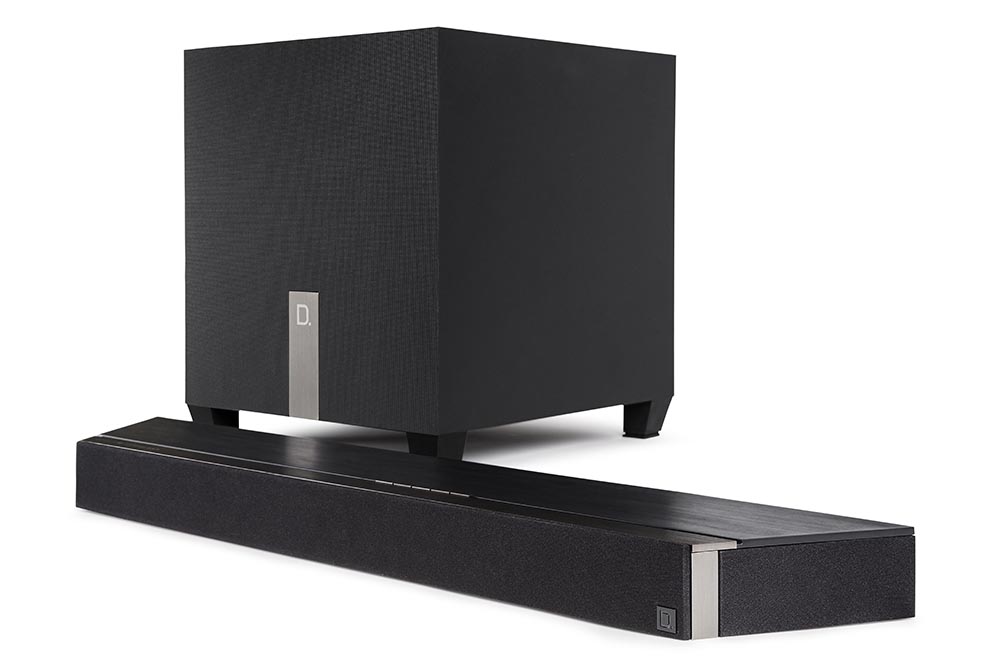 Definitive Technology is a brand that has always kept pace with consumer audio trends and over the years the company has accomplished this through designs that stand out from the many “me-too” products that dot the home audio landscape.

A perfect example of the company’s ability to remain relevant and innovative is the new Definitive Technology 3D Mini Soundbar.

The Studio 3D Mini Soundbar System is a compact, two-piece audio system that delivers a 4.1 audio experience, and compatibility with today’s immersive audio formats. Available at a reasonable price, the latest Definitive Technology soundbar provides everything a homeowner would need to enjoy their favorite TV shows, movies and music without sacrificing sound quality or functionality.

Benefiting from the soundbar’s versatility, my family has been enjoying the 3D Mini system with everything from streaming content and broadcast TV, to music without distracting from the fun that AV can deliver.

The soundbar system comes in a good-size single box. Unpacking the system is easy enough. Inside the box is everything needed to set up the soundbar, including cables and a remote control.

Taking a closer look at the soundbar component, unlike a vast majority of soundbars that could be characterized as a long rectangular box or long, narrow cylinder, the 2-inch tall, by 26.5-inch wide, and 4.5-inch deep, 3D Mini Soundbar features angled side panels that strike a unique look. Internally, the soundbar utilizes two 1-inch x 3-inch oval midrange/woofers, per section, and a pair of 1-inch tweeters.

The unit offers a choice of USB, Toslink optical, analog 3.5mm, and one-in/one-out HDMI with eARC HDMI connections to enable everything from music players and TVs to connect to the unit.

The companion 13.98-inch tall by 12.52-inch wide and 12.52-inch deep, subwoofer incorporates an 8-inch woofer and wireless networking technologies to pair with the soundbar.

In addition, the system offers Amazon Alexa, Google Assistant and Apple Siri voice-control options, and on the video side, the package supports 4K UHD video, and the Dolby Vision and HDR10 HDR formats.

Setting the system up didn’t take too much time.

Once I had unboxed the soundbar and wireless subwoofer, I paired the products up with a 43-inch Vizio 4K television, and a trio of source components: A Dish 4K Joey set-top box (STB), an Oppo Blu-ray disc player, and a Roku stick.

The physical setup portion was easy. I simply ran an optical cable from the output of the TV to the input of the soundbar. Next, I simply placed the subwoofer in a location that helped it blend into my room, and I then plugged both products in for power.

Opening up the HEOS app on my iPhone I simply—like other similar solutions—followed the step-by-step setup process that includes placing the system on my network. Confusing me while I was trying to put the system onto my network, the app told me it could not “find” the Studio 3D Mini soundbar. However, about a minute later the app recognized the soundbar and instructed me to run two firmware updates. 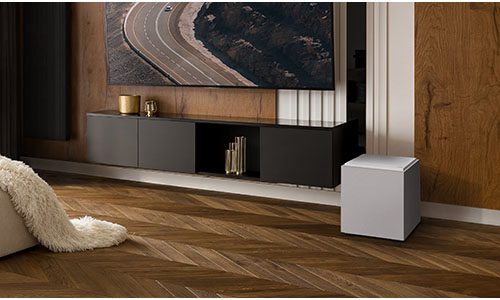 To do this I had press the “connect” button on the rear panel of the soundbar. Taking a few minutes, I updated the firmware and then completed the soundbar portion of the setup, which allowed then allowed me to move onto the wireless subwoofer.

Finishing up I entered the Studio 3D Mini Soundbar’s equalization (EQ) options by pressing the ellipsis button on the app to make some minor EQ adjustments.

Starting off my time listening to music would immediately let me know how well integrated the sub is with the soundbar, which is a sound element I prioritize. Listening to a bunch of music from the 1990s, I played back music from The Foo Fighters, Stone Temple Pilots, Third Eye Blind and others.

My initial impressions were impressive. I thought the midrange was transparent, the bass was tight, but the volume was a little high, and the top end was a touch bright.  Going into the settings I adjusted the EQ to tame the upper frequencies and I also lowered the volume of the subwoofer.

Feeling satisfied with what I had done I had got back to my listening. My adjustments provided the balance and integration I was looking for and they allowed me to focus on the fun factor the system delivered.

Over time, the one thing that continually caught my ear was the wide soundstage the Studio 3D Mini Soundbar system produced. I estimate the soundbar is capable of delivering a stable image well off-axis from an “ideal” seating location.

After spending a few weeks with the system, I went back into the EQ to make a couple of fine-tuning adjustments to add some sharpness and definition to spoken word dialog. I found the system’s basic volume, bass, treble and subwoofer controls, while simple were highly effective in providing me with the flexibility I required to tune the system to my usages and room environment, which I would consider a bit on the “dead” side of the acoustical spectrum.

Some of the TV content I watched included broadcast television, streaming content, including shows from Apple TV+ and Disney+ and Hulu. Highlighting the streaming content was Hulu’s broadcast of the Lollapalooza 2021 event in Chicago.

I thought the surround capabilities of the soundbar are equally as impressive as its musical capabilities. Dialog is intelligible with both male and female voices, surround effects are spacious and with the subwoofer dialed it, there is a nice amount of low-frequency support that enriches what you are seeing and hearing.

Looking beyond the system’s sound quality, setup flexibility and industrial design, I would also like to emphasize that I think its size is the perfect complement to today’s smaller and mid-size TVs.  The size fits perfectly underneath the bezel of my TV and between its legs, which are positioned at the far left and right of the screen.

As you can tell I really like the Studio 3D Mini Soundbar system. It performs well with music and AV content, it is ergonomically friendly in terms of its footprint and integration into home spaces, and its industrial design is complementary with the design of modern TVs.

Moreover, the app works well as an interface, despite the little bit of a hiccup in the setup process. As a total package the Definitive Technology Studio 3D Mini Soundbar system could easily serve as integrators well in a range of installation scenarios, and it is one of a few soundbars out there that delivers on the promise of surround sound.