The annual CE Pro 100 list of the highest revenue custom installation companies reports 8.6% growth in 2019, with commercial projects on the rise.
Jason Knott 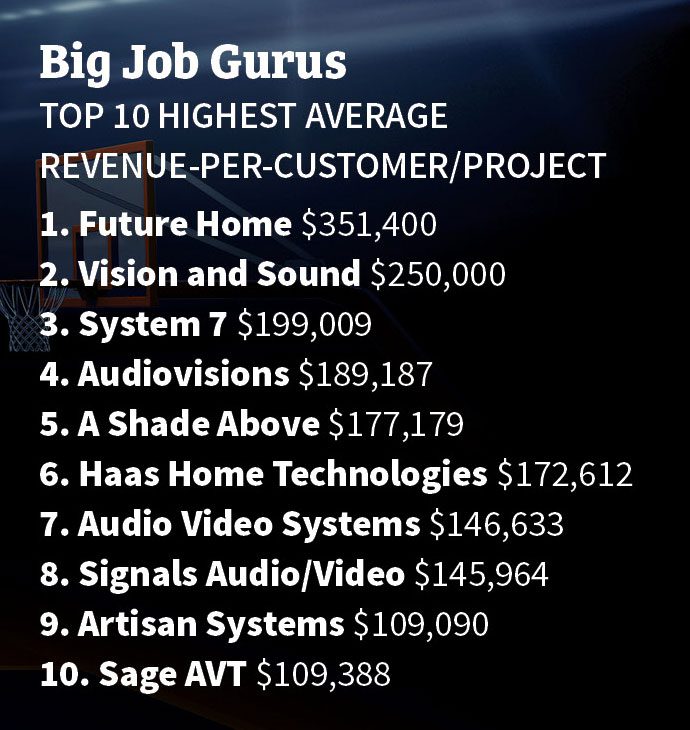 While basketball has its own various Dream Teams, so does the custom electronics industry. The 2020 CE Pro 100 list itself might be considered a Dream Team, reflecting the leading custom installation companies in the United States. More granularly, this year’s list reflects several new Dream Teams formed from national rollups as companies like Bravas and AVDG unite several CE Pro 100 companies into one to bring a high-end installation element coast to coast. Finally, within each CE Pro 100 company itself exists its own Dream Team of talent, from owners to operations, sales, installation and service.

Many other key business metrics among members of the list are also robust, including a predicted 8.4% growth predicted for 2020. However, those growth predictions were made prior to the full impact of the coronavirus pandemic. Surely, the economic shutdown caused by the virus will rachet that growth rate down — though the pandemic has also generated opportunities such as home networking, video conferencing, human-centric lighting and more.

Having said that, the custom electronics industry tends to be an optimistic bunch overall. Even in the years of the Great Recession when new housing production dropped dramatically, custom integrators expected solid growth rates for their businesses, and the CE Pro 100 is no different.

The CE Pro 100 list itself, which began in 1999, is unique and constantly evolving. This year’s version of the top custom installation companies in the United States is as diverse as ever. The list includes high-volume mass-market players, security companies, retailers with installation divisions and commercial integration companies that dove headlong into the residential market. The list also includes several national rollup players, as noted, whose own Dream Teams are taking high-end custom installation coast to coast.

The revenues that make up the CE Pro 100 list have changed over the years. For many years, the qualifying revenues were solely based on income derived during the installation process of various subsystems. (See sidebar for complete list of subsystems.) But with the inception of subsidized alarm-based smart home offerings, and the growing trend for traditional custom integrators to offer service agreements, the basis for the CE Pro 100 list shifted to include RMR (recurring monthly revenue) as an income source.

The growing number of commercial installations being done by custom integrators has significantly boosted revenues for many firms as they look to balance their portfolios. When the Great Recession hit a decade ago, many integration companies migrated to add commercial work as the housing market sagged. In many cases, even as the residential market boomed once again for the past 10 years, integrators maintained their commercial divisions.

Indeed, the rise of “resimercial” installations has grown so much that this year’s CE Pro 100 performed a total of 26,100 installations in commercial facilities. While that number is dwarfed by the total number of residential projects, it is still significant. Indeed, only eight members of the CE Pro 100 did not install a commercial system last year. So, due to this growing trend, that is why the CE Pro 100 list includes a full list of the number of commercial installations being done by integrators.

Also, many CE Pro 100 members have migrated their once appointment-only showrooms to accept walk-in clients, adding a limited retail component. Other companies have always had strong retail elements to their businesses, as well as online elements in more recent years. In order to accurately reflect the full, diverse revenue base on the CE Pro 100, this year’s list includes revenues from retail equipment sold over the counter and either installed, delivered or serviced professionally.

RMR continues to be a growing source of revenue for many CE Pro 100 companies. In all, 79 members of the CE Pro 100 earn some sort of RMR, whether it be from security monitoring, network monitoring or service agreements. But many of those companies are still just at the outset of the RMR game, with 17 companies earning 1% or less of their total revenues from RMR.

Looking at averages, CE Pro 100 companies earn an average of 8.9% of their revenue from RMR. That is up from 25% from last year, when the average was 7.1% of revenue.

Nowhere is the value of RMR more apparent than at the top of the list, which is led by high-volume smart home players Vivint Smart Home and large regional security player Guardian Protection Services. Both companies have deep roots in the security industry, which has seen a giant shift in its residential offerings beyond just intrusion and fire alarms to adding control of lighting and thermostat.

Similarly, Guardian earned 77% of its $210 million (down $4 million from last year) in custom revenues from recurring contracts. Guardian did 30,070 smart home system installations in 2019, which was 5,262 fewer than the year before. Guardian has operations across multiple states on the East Coast, Midwest and Texas, and is heavily reliant on new home construction.

The strength of custom retail is also apparent on the list. Illinois-based Abt Electronics reported a strong $68 million in custom installation revenue solely from sales of equipment for installation, along with the installation of 13,500 systems. Likewise, HTSA member Just One Touch / Video & Audio Center in Los Angeles has total revenues of $118.7 million. Fully, 65% of its total income is derived from custom installation in residences and businesses, which equates to more than $77 million from 2,255 residential and commercial jobs.

You might be wandering where ADT (NYSE: ADT) and Best Buy (NYSE: BBY) are on this year’s list. Since becoming a public company in January 2018, $5.1 billion ADT has been on a buying spree, focusing on its growing commercial division, which now produces 20% of its total revenues. It also launched its Blue by ADT DIY division in 2019.

Meanwhile, its new smart home platform, dubbed Command & Control (replacing Pulse), now represents 80% of all its residential installations. With all its moving parts, it is difficult to categorize ADT’s smart home revenues, which is necessary for the CE Pro 100 entry.

Best Buy’s situation is similarly complex. First, the $43.6 billion company does not break out its pure custom installation revenues in any of its public filings, let alone split out revenue from its successful Magnolia Home Theater store-within-a-store locations. Second, its Geek Squad In- Home Advisors program, with 725 advisors, conducted 250,000 free in-home service calls last year. From those free in-home visits, the company reports receiving regular repeat business both at retail and in custom installation from those customers, but Best Buy does not specifically break out that data.

Its Total Tech Support program that launched in May 2018 now has more than 2.3 million subscribers paying $199 per year as of the end of its most recent fiscal quarter. That alone equates to an incredible $457-million line item of additional custom installation revenues for 2019.

According to CEO Corrie Barry, the average Total Tech Support member uses the service an average of 2.5 times per year. Given all these complexities, further impacted by the fact that Best Buy is a public company and any public declarations must be totally accurate, CE Pro opts not to try to estimate its data.

The number of installations per company continues to grow. The median number of residential projects among the CE Pro 100 was 168, a slight 1% increase over 2018. Comparatively, the median number of commercial projects completed was 14. That means that nearly one in every 10 installations in 2019 was a commercial job. If you take Vivint’s installation ifgures out of the equation, it jumps to 13% of all projects are resimercial. Who knows how that percentage might change in the wake of the COVID-19 crisis.

The median number of employees in 2019 was 25, up one employee from 2018 and up from 22 employees back in 2017. Again, this will be a key number to analyze following the coronavirus situation to see if the government’s CARES Act, which offered loan forgiveness if companies maintained their staff sizes, actually ends up having that effect or if we see companies shrink.

Revenue per employee is another key benchmark in the industry. For 2019, the median revenue per employee was $224,357. This is a vital figure for many integrators because if a company knows how much revenue is necessary to support an individual employee, it can help them determine when to hire (and when to let go) of employees.

One other benchmark of note: When the CE Pro 100 was introduced in 1999, the largest company on the list did $5 million in residential custom installation revenue. This year, 65 companies on the list exceed that $5 million number, up from 53 last year.

How Companies Verify Their Data

Companies are asked to submit their financial data or have it verified by their accountant for the CE Pro 100. The verification is optional. This year, CE Pro received some form of documentation from 97 entrants. Companies are required to sign a statement that says, “the information provided is accurate and truthful.”

CE Pro has selected gross revenue in multisystem residential and resimercial installations as the determining factor for the ranking, recurring monthly revenue from security monitoring and service agreements, as well as over-the-counter retail sales of electronics and that are installed.

The June issue of CE Pro will include a brand analysis of vendors used by the CE Pro 100. All entrants in the CE Pro 100 are eligible to attend the CE Summit/Total Tech Summit as a hosted guest. It will be held this year in Cleveland from November 9-11, 2020.

The CE Pro 100 list is aggregated in several ways:

The list is ranked by the volume of billed, not booked, business from residential and commercial systems that incorporate at least three of the following subsystems:

The data also includes recurring revenue from multi-subsystem installations. Given that RMR for subsidized smart home installation is a new business model being adopted by many companies, CE Pro began including RMR revenue in the custom revenue totals a few years ago. As always there are many large companies that chose not to participate in this year’s listing. Many higher-end custom companies do not want to be compared with high-volume companies on any list. Is your company missing from the list? If so, email CE Pro at jason.knott@emeraldx.com, or please email any other comments about the CE Pro 100.