The economy isn't bad, just strange. 5G will be awesome, but so what? RMR isn't 'all that.' Plus, lots of Marc Fisher, Legos and lighting at ProSource Spring Meeting 2019.
Julie Jacobson

Legos and Make-a-Wish and Marc Fisher and lighting and ProSource chairman Murray Huppin, oh my!

It’s a “very strange market right now,” says Walton Stinson, president of the giant Denver-based home-technology firm Listen Up. “It’s not at all a comfortable market.”

Stinson shared the sentiments at the spring meeting of ProSource, the large home-technology buying group. As member of the ProSource board, Stinson says the sentiment in board meetings seems to suggest “some consumer pullback” vis-à-vis the volatile economy.

The situation is far from dire, however. The larger jobs with long pipelines don’t respond much to the stock market, he explains.

“The large projects are still there.”
— Dave Workman, ProSource

Indeed, ProSource dealers seem to be doing well in the high-end audio, video and home-automation business.

While the stock market is strong, tax refunds might have been lower than expected, and there is still fear about the macro economy.

Workman says the group is going to have to “try to find the new normal,” while urging members to be anything BUT normal.

“Our hallmark is to be willing to change, to try new things,” he said during a press briefing with Stinson, Workman and ProSource VP Andy Orozco.

“We’ve always been about diversification,” Huppin says, explaining how the company recently added textiles to its custom-electronics fare. The organization dispatches employees to trade shows throughout the world to scour for new opportunities.

The Next Big Things

Lighting and motorized shades are the current “big things” among ProSource members, and the momentum shows no signs of slowing. ProSource dealers are just now embracing light fixtures after tiptoeing around the new opportunity for a couple of years. ProSource’s three fixture vendors – American Lighting, DMF and WAC – had some of the most enthusiastic dealers at their tabletops during one-on-one meetings … and also some of the most confused dealers.

Meanwhile, Orozco noted that two of ProSource’s regional managers, the annointed Category Champions, are going through extensive training with the American Lighting Association. A dozen of ProSource’s most enlightened dealers are calling the shots on the group’s Lighting & Shading Committee.

“There is a new opportunity to do lighting. It's in the conversation in a way it hasn’t been for 100 years.”
— David Warfel
Light Can Help You

Lighting designer and friend-of-the-channel David Warfel made his second ProSource appearance with another crowd-stopping presentation, which is best saved for another article. We’ll leave it at this for now:

“Five million homes will change hands this year,” he said. “There is a new opportunity to do lighting. It's in the conversation in a way it hasn’t been for 100 years.”

Besides shades and lighting, Workman and team are gearing up for 5G and AI, even while confessing they can’t really fathom what these new realities will mean for the industry.

“When it comes to 5G,” Huppin says, “I think we’re all going to be amazed. There would be no Uber and Lyft without 4G. It is beyond my imagination what might come next.”

As a big online retailer, Huppin is equally dizzy with the prospects for engaging with customers in the future, contemplating “how to connect the customer to purchasing.”

Augmented reality, he suggests, “will let you experience products in your house.”

And then came a discussion on recurring revenue (RMR). In addition to the inevitabilities of 5G and AI, “there’s going to be a lot more recurring revenue,” Workman stated matter-of-factly. “Hardware margins will be lower so maybe we’ll gear business to smaller transactions.”

As the group (including press) discussed the importance and certainty of a more RMR-driven industry, Stinson wasn’t so sure.

“My company’s very healthy and we don’t have a recurring revenue model,” he said, as the rest of us gasped. “We’re profitable and projected to continue being profitable.”

2. The group brought in a large crop of new vendors from 2018 through 2019, including Legrand (with Nuvo, Middle Atlantic and Luxul), Artnovion (via Origin Acoustics), Arcam (via Harman), Astell & Kern, KLH, Dish, Thorens and Future Ready Solutions.

3. ProSource won't sign any more vendors this year, Workman says. It's hard work. The organization wants to focus on its other initiatives right now.

4. One would-be vendor partner, portfolio in tow, sat in the corridor, crestfallen by the pronouncement.

5. ProSource — rather emcee Marc Fisher from Origin Acoustics — raised over $110,000 for the Make-a-Wish Foundation through a Lego-building contest that surely was rigged by the winning team, which fed chocolate to the child judges and built a rather hideous looking structure that was nothing but tall and colorful.

6. Marc Fisher, by the way, is now president of Origin Acoustics — a role he entered uncharacteristically quietly. Nick Berry became CEO last year, and founder Jeremy Burkhardt gleefully demoted himself to chairman of the board, chief wanderer and seeker … but still manages to drive the crew bonkers when he appears at their Las Vegas HQ. 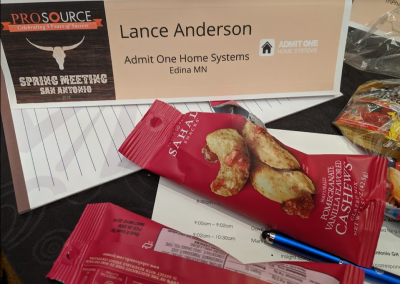 7. Longtime Burkhardt sidekick Dave Donald, by the way, has left Origin to become director of business development for OneVision Resources. If there's one guy — and only one guy — who can develop business better than OneVision chief Joey Kolchinsky … it's Dave Donald.

9. That cute little dress ProSource membership director Sherry Dantonio was wearing? She found it online during a business trip, hired Task Rabbit to fetch it, purchase it, and deliver it for one small fee … and just in time for the evening function. Integrators shared a whole lot of stories about using these task-oriented services to save time, money and aggravation.

10. Nobody gets between Lance Anderson and his Pomegranate Vanilla Flavored Cashews Glazed Mix.

11. Employees at Origin Acoustics are tattooing themselves with their employer's logo. OK, that's a little bit weird. Want to know what's really weird? Apparently six dealers have also branded themselves. Let's hope they never break up.

12. Fisher, who figured largely in the charity thing, the tattoo escapades, the “employee engagement” session and the very loud demos in the early morning when neighboring hotel guests were still sleeping … easily won ProSource Spring Meeting 2019. 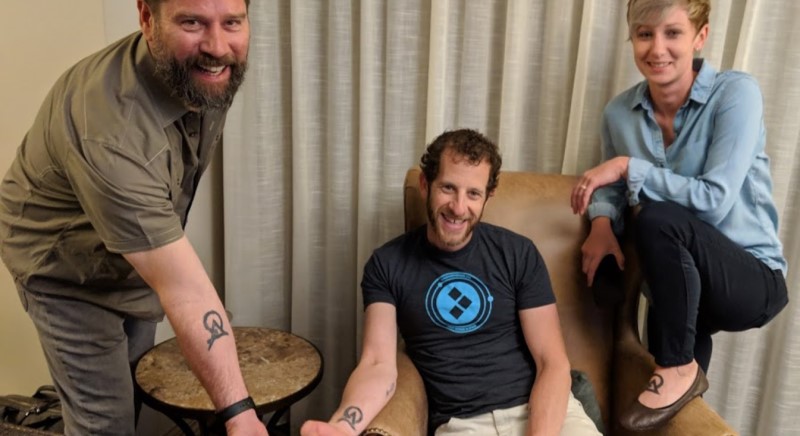