Delos founder Paul Scialla talked about how today's homes can adjust based on their occupants with data and integration of automation and things like air filtration, water filtration, lighting, acoustics, and more. 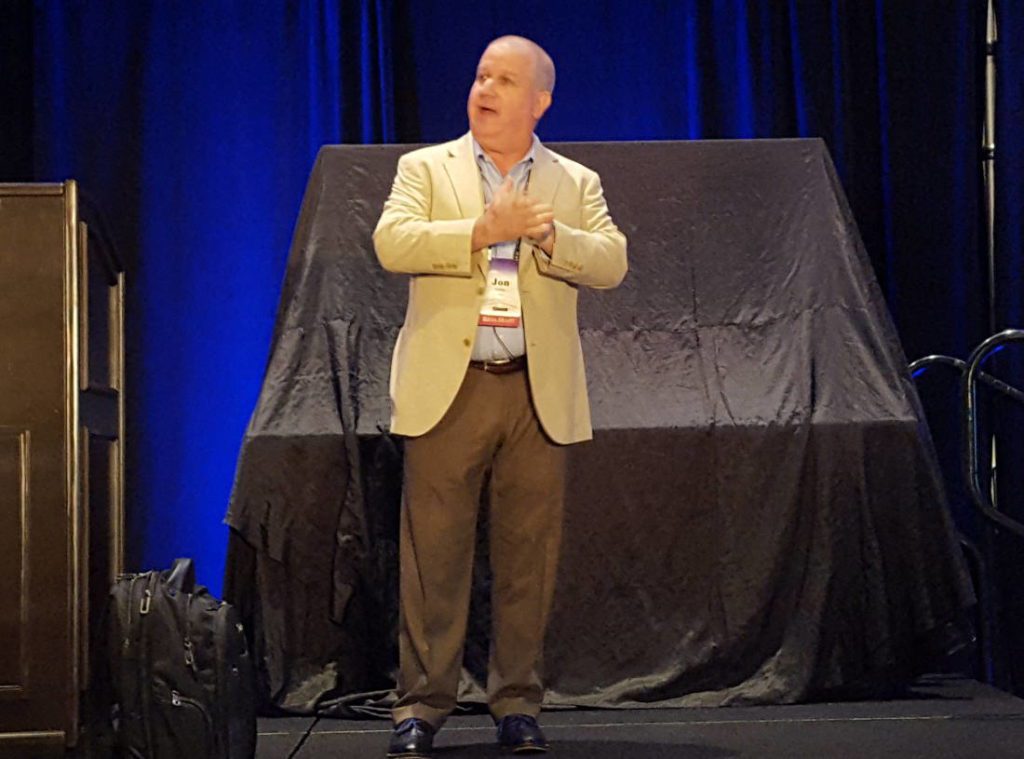 If you’re going to borrow your mantra from someone, it’s not a bad idea if the source is largely acknowledged to be the best at their craft. So you can’t fault the Home Technology Specialists of America (HTSA) group leaders for invoking Wayne Gretzky more than once during the recent spring conference in Orlando, Fla.

Doing their best to have the organization “skate to where the puck is going to be, not where it has been,” as the hockey legend once said, HTSA executive director Jon Robbins, director of new technology initiatives Tom Doherty and others invoked the idea as they try to steer dealer members to greater success.

The emphasis on opportunities that could be viewed as ahead of the curve – where they see that puck heading – was exhibited at the conference, held April 2-5, in particular by a keynote presentation focusing on health and wellness in the home, and influences such as air filtration, water purification, circadian lighting, acoustics and more – notably the potential automation of such elements based upon customer data.

“We don't want to be called a buying group; there's so much more. We barely go a month without having some type of educational initiative.”
— Jon Robbins

Delos, the company that provides a software platform and has literally written the book (of standards) on this intriguing business, is not yet an official vendor partner of HTSA. As part of Robbins’ welcome to attendees of the conference, he highlighted the companies that have become recent roster additions that include Crestron, SnapAV’s Luma/Visualint, McIntosh, RoseWater Energy and distributor AVAD.

“We think we do education better than anyone else in this space,” he told attendees, which at 319 marked a record spring conference total for HTSA. “Since we last met we’ve held three masterclasses at Maverick Technical Institute, two vendor masterclasses and one standardization masterclass. We don’t want to be called a buying group; there’s so much more. We barely go a month without having some type of educational initiative.”

Robbins said he prefers HTSA to be called a “trade consortium” going forward.

“Don’t get me wrong; we love the deals, we love the rebates. But we do a whole lot more for our dealers,” he said.

Getting Educated on a New Kind of Home Tech Opportunity

That education goes hand-in-hand with the types of sophisticated technology initiatives HTSA is bringing to its members so they can be out in front of that puck for their largely well-heeled clientele.

The efforts appear to be paying off. Robbins reported HTSA members’ growth of 36.7 percent in overall vendor partner purchases in 2017. “Our people are busy, and we’re going to keep after it,” he said.

While it might sound like a foreign concept for dealers who have always been more well versed in home theater and two-channel audio, home wellness is an extension of what’s been trending in commercial businesses, and for HTSA guys, the seeds of lighting’s impact (and potential revenue boost) were already planted last fall when Doherty came aboard with long-time experience and expertise in the lighting category and honed in on fresh opportunities in lighting design services, architectural fixtures, LEDS and such.

“We’ve made a lot of progress there,” Robbins said about the entrenchment into the lighting business. “[Members] have literally millions of dollars in the queue, on contract, or have already sold millions of dollars’ worth of electrical fixtures. Some guys had already started on that path; we’ve helped expedite the process.”

Circadian lighting – enhancing clients’ everyday lives via smart lighting that automatically adjusts throughout the day and evening to positively affect mood, energy, etc. – is an extension of that and a key factor in the home wellness area.

In his keynote presentation, Delos founder Paul Scialla outlined how we as a society spend 90 percent of our time indoors, and how much that everyday surrounding environment contributes to our physical and mental health.

Using technology, integrators can affect peoples’ lives in a very real, very beneficial way, much in the way that businesses and commercial real estate developers/owners are trying to update their corporate offices and other public spaces for healthier workplaces and public settings.

Delos launched the International WELL Being Institute, which administers the WELL Building Standard; and according to the company website, WELL is third-party certified by Green Business Certification – the same body that certifies the LEED program that so many custom installers are familiar with.

“A home is not smart if it's not healthy. If you can add wellness intelligence to a household, people are going to listen.”
— Paul Scialla, Delos

“The narrative of what the ‘smart home’ is – a home is not smart if it’s not healthy,” Scialla told attendees. “If you can add wellness intelligence to a household, people are going to listen.”

He explained that there’s ample science behind the story that integrators can tell; the renowned Mayo Clinic collaborated on the WELL Living Lab, the first such lab created exclusively to research real-world impact of the indoor environment on human health and wellness.

“You’ve been providing home automation, home intelligence – this is the next chapter,” Scialla said. “We want to get a whole group of people inspired about this story, to become DARWIN-accredited service providers. We’re seeing way more demand than we can handle; we want this to be your story.”

So can HTSA members envision the profit puck heading toward early adopters of home health and wellness?

“The opportunities ‘on the horizon’ are closer than you might think,” Robbins said. “We have a couple of members who are already working on some spec homes and projects.” He notes that an initiative such as this needs to be rolled out very deliberately and orderly, because an integrator’s failure in this type of new endeavor could be costly, but “there’s a whole lot of excitement” about this new way to talk to architects and clients.

“They recognize the new narrative that they can have with their existing customer base in terms of this kind of service and value-add that they can provide,” added Doherty. “It’s important because clients are numb to words like ‘home automation’, ‘IoT’, ‘4K’, ‘HDMI’ – none of that stuff is exciting or sexy anymore in my experience. What is important to people is the look and feel of their home.

“You communicate what was communicated in [Scialla’s] talk to any of our homeowners, you’re going to have their attention, they’re going to be interested,” he continued. “If you can talk expertly, follow through and implement that, you are completely differentiating from everybody in your market.”

New HTSA board member Mark Hoffenberg, CEO/founder of Audiovisions in Lake Forest, Calif., has his company at the forefront of the wellness initiative. Besides test-case projects working with Delos, Audiovisions has been proactively pursuing more possibilities in lighting’s usage, which overall augments the company’s efforts to “own the ceiling,” as Hoffenberg puts it.

That in itself has presented some natural tech convergence due to the big Sonance dealer’s ability to spec lighting that blends well with distributed audio piped in through comprehensive in-ceiling speaker designs.

“I wouldn’t say that our clients are actively asking for things in new categories, but once we talk to them about what their overall wishes are we understand what some of the opportunities are,” Hoffenberg said. “Human-centric lighting is an area that we have a big focus on, lighting that follows the circadian rhythm. Lighting in general, for many, many years we focused on control, but now we’re focused on the whole ecosystem of lighting.

“We don’t typically bring up that term [circadian rhythm lighting] initially, we just demonstrate it. And when we demonstrate great lighting design and great lighting results, the response is immediate – not just with clients, but with the architecture and design community, they immediately get it.”

Other priority matters HTSA addressed with conference attendees centered on other emerging tech opportunities of voice control and energy management.

Like lighting fixtures and home wellness, energy management might not be for all dealers, but HTSA’s vendor partnership with RoseWater Energy speaks to the potential of the category. The company provides an energy management hub that offers battery backup, power conditioning, surge protection, and storage for uninterruptible power to fuel all the integrated systems in a connected home – and offer an additional recurring revenue stream opportunity.

And the client will be upset with the integrator, not the utility, Piccirilli noted. The combination of being able to protect all the precious technology in a home, with the need for improved power quality in many areas of the U.S. – thanks to things like population growth and a boom in total renovations in neighborhoods perhaps built for 1,500-square-foot residences but now home to 5,000-square-foot homes – has led to poorer power quality and overburdened power grids, he said. So RoseWater made for another good fit with HTSA members.

“There’s the David-and-Goliath effect that we call it in our area. You get these towns that are all established but then money comes in and they’re knocking down a small house and building a monster almost exceeding the plot. It’s taxing the grid,” said HTSA president Dan Paulson of Paulson’s Audio & Video in Farmington Hills, Mich. “So It’s felt like the right move to bring [RoseWater] into the group and educate the dealer and in turn educate the client.”

“[People are] knocking down a small house and building a monster almost exceeding the plot. It's taxing the grid.”
— Dan Paulson, Paulson's Audio & Video

Meanwhile, clients are likely already asking about another technology that’s experienced explosive growth of late, but really still has some strides to go as a viable and reliable interface for homeowners to interact with their systems: voice control.

Alex Capecelatro from voice-activated home automation provider Josh.ai delivered a keynote that outlined some of the struggles in piecing together the voice control puzzle for home automation clients. That included who those target clients might be (busy people, people expecting simplicity, seniors, kids) and might not be (“It’s still not great for thick accents, some non-English speakers…people who expect magic 100 percent of the time, see Jarvis in Iron Man and think that happens all of the time,” noted Capecelatro).

He offered tips such as placement of microphones and speakers that facilitate voice controls, and detailed the types of barriers and amount of smarts involved to generate effective, advanced voice commands like natural language processing, deep linking, compound commands, personalized scenes and more. Plus, integrators must set proper expectations for clients.

“Is voice control smart? No, but there are smart things about it,” Capecelatro explained. “The reality is it’s a control-based system; it’s important to let clients understand systems are amazing but they’re not really smart.”

Still, he cited research that shows 39 million Americans now own a smart speaker at home, which is roughly double the number from one year ago, so voice control isn’t going anywhere. Plus it already offers inherent ‘wow factor’ to customers.

“How do you make money? There’s an emotional reaction people have to voice control,” he said. “Ease of use – ‘it just needs to work’ for clients.” Voice also offers the chance to upsell integrated devices and service plans, so integrators can bolster systems as improvements and capabilities are rolled out.