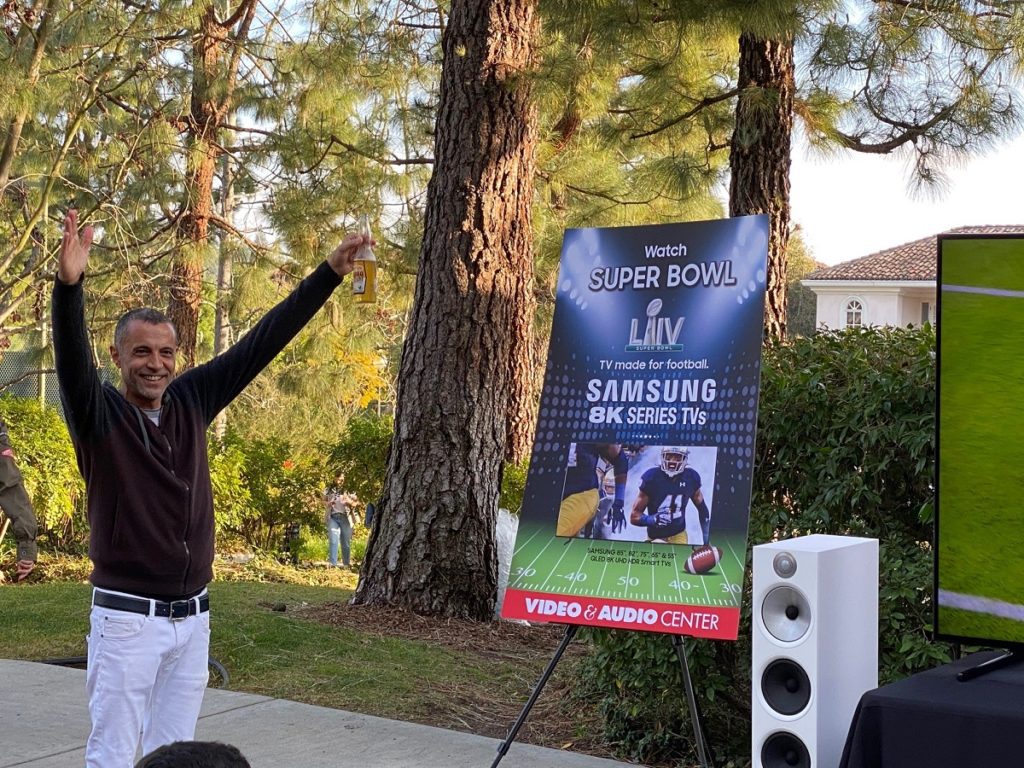 The catered event featured eight Samsung 8K TVs of varying sizes, along with Bowers & Wilkins 800 Series and 700 Series loudspeakers for the audio. By the end of the event, Just One Touch/Video & Audio Center had sold all eight TVs.

“This was not designed to be a selling event,” says Tom Campbell, corporate director/chief technologist at Just One Touch, a member of the Home Technology Specialists of America (HTSA) buying group. “It was really just a ‘thank you’ event.”

Invited attendees were a range of clients, from the Hollywood film industry, real estate and finance. Due to the overwhelming number of RSVPs, Just One Touch/Video & Audio Center had to set up an outdoor viewing area for guests who could not fit into the community center. Just One Touch sales associates were on hand to answer any questions attendees had about the video and audio.

The Super Bowl game, which was broadcast in 4K and upconverted to 8K for the party, is ideally suited to showcase 8K (and 4K), as was noted by Hollywood director Barry Sonnenfeld last year at CEDIA Expo 2019 when he recommended 8K demos be done using sports, not movies.

“Guests were raving about the picture quality. One guest immediately saw it and said they had to have it right away in their home. By the end of the game, we had sold all eight TVs,” says Campbell.

Meanwhile, the halftime show, featuring Shakira and Jennifer Lopez, was the time for the Bowers & Wilkins’ 800 Series speakers, which retail for $30,000 a pair, to shine.

“The audio during the halftime show was booming,” says Campbell, who noted that attendees were seen boogieing to the music.

Joseph Akhtarzad, owner of Just One Touch/Video & Audio Center, was thrilled with the outcome of the five-hour event.

“This was beyond expectation. The future is definitely 8K, especially after people see it. The fact that we sold every TV at the event is amazing. 8K was the slam dunk winner. It has become a must-buy,” he comments.