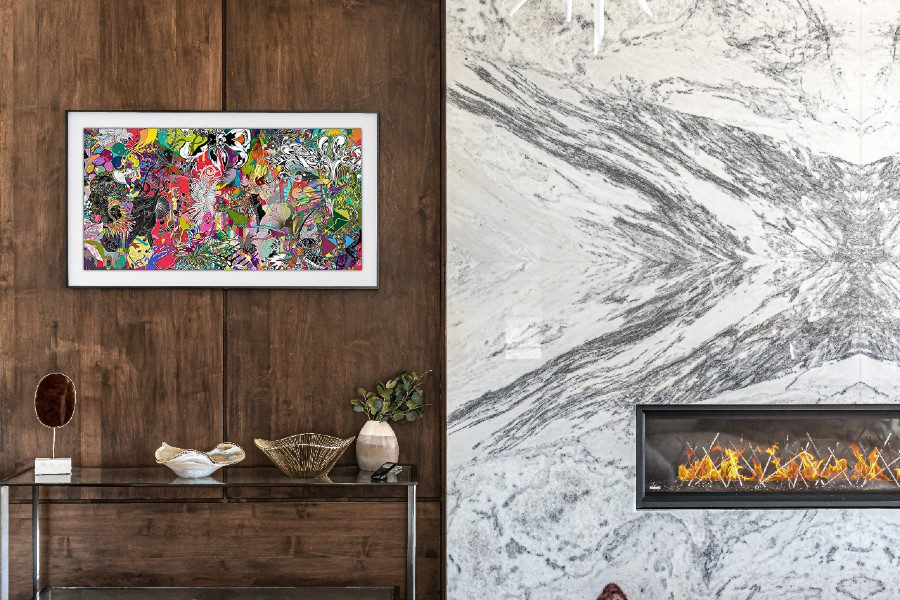 Tym Smart Homes & Home Theaters in Herriman, Utah, works diligently to put itself and its work in front of potential customers. The integrator is active on social media, and YouTube in particular, and also has been able to showcase the quality of its AV and home automation services in a real-world setting through installations among the Utah Valley Parade of Homes.

Since 1977, the Utah Valley Parade of Homes event has been giving builders a chance to show off their luxury – and smart, in the case of the ones Tym has partnered with – to the public. In 2020, the self-guided tour featured 24 homes from 3,061 square feet to a whopping 19,846.

One alpine-style dream home Tym outfitted is called Matterhorn, and the integrator loaded it with a mountain of smart technology. It’s a 14,475-square-foot residence featuring a sleek design and woodwork that includes highlights such as a three-story floating staircase.

But distributing video content to the displays was challenging for Tym due to its insulating concrete forms construction, the integrator notes. With conduit and HDMI cables being too thick to recess into the Styrofoam walls, Tym began designing for a matrixed video distribution system, but needed something flexible and cost-effective.

That ruled out utilizing a traditional 8×8 matrix, which would need to be upgraded to a larger, and more expensive, 16×16 solution when the homeowner added more TVs. In addition, it would limit the homeowner’s ability to hook up portable sources like video cameras and video game consoles.

“No matter how much we explain to clients that a traditional video distribution matrix essentially locks them in at a fixed number of displays and sources, they become frustrated when it happens. And with this home prewired for even more TVs, a maxed-out matrix was inevitable,” says Greg Montgomery, co-founder and vice president of Tym.

A video-over-IP (VIP) solution, however, can be expanded with minimal investment in additional hardware. For Matterhorn, it also had to be able to upscale/downscale video and upmix/downmix audio so that the owner could incorporate sources and displays of any resolution or audio configuration without issue, Montgomery explains.

Tym spec’d Just Add Power’s Ultra HD Over IP platform, which addresses the high-priority needs for this project. As Montgomery notes, it offers ultra-low 16 ms of latency from source to screen and supports 4K Ultra HD resolutions and HDMI 2.0 devices with HDCP 2.2; and enables seamless switching between any resolution HDMI source as well as lossless multichannel audio formats, including Dolby Atmos.

“Just Add Power helped us avoid [challenges] by making it simple to grow the system with the homeowner’s changing lifestyle, while at the same time meeting our need for exceptional reliability and allowing the homeowner to incorporate multiple resolutions and configurations.”

Tym used a Control4 automation system that can also be controlled via Josh.ai voice control. For a network backbone, the integrator enlisted Snap One’s Araknis products.

As part of the distributed video system, video wall functionality is built-in for displays installed in portrait and flipped configurations, as well as image push/pull/pop features. An integrated scaler on the receiver automatically adjusts the picture to fit the screen. 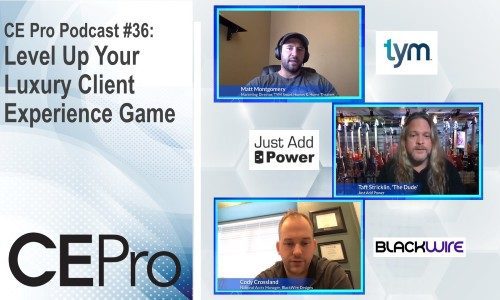 Each source has a Just Add Power’s VBS-HDIP-707 PoE transmitter, while VBS-HDIP-508 PoE receivers are attached to its displays. The Ultra HD Over IP platform is engineered for scalability, so expanding the system with an additional screen or source is as simple as adding another receiver or transmitter. The Just Add Power system is fully integrated with the Control4 system.

“Matterhorn’s owner — an avid news viewer — absolutely loves their Just Add Power system and how simple it is for them to stay informed, whether it’s sending one news channel to multiple TVs at once or watching two different channels in the Great Room on separate displays,” Montgomery reports.

“They’ve also been impressed by its reliability. We measure the effectiveness of any installation by the number of service calls we receive, and as usual, that number is zero for the Just Add Power system in this home. And to top it off, the homeowner will never know the frustration of having to upgrade to a larger matrix when they want to expand their system.”

Click here to see more photos of this project!