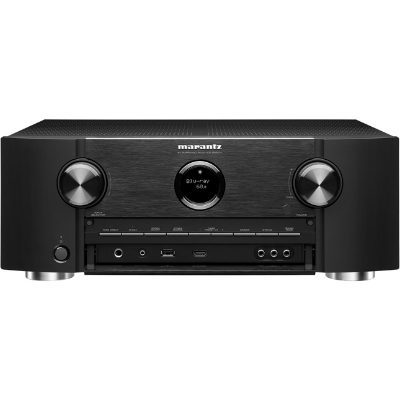 Versatility has always been the hallmark of any great A/V receiver. Marantz is taking this notion seriously with the release of the SR5014 and SR6014 4K Ultra HD A/V receivers. They’ve included all the expected features and technologies, and added some new elements, as well.

Another new perk: Zone Stereo Mode—a.k.a. Party Mode— is now storable on “Smart Select,” so both Main Zone and Zone 2 will initiate music playback in sync by simply pressing the “Smart Select” button on the remote, app or third-party controllers.

“From outstanding 9-channel amplification and IMAX Enhanced upgrades in the SR6014, to the clarity of 4K Ultra HD and the addition of Dolby Atmos Height Virtualization to both models, the Marantz SR-Series A/V receivers are the ultimate home entertainment solutions for the most demanding audiophile and video enthusiasts.”

For home theater applications, the SR6014 supports an array of multi-dimensional audio formats, including IMAX Enhanced, Dolby Atmos, DTS:X, and DTS Virtual:X. Both the SR6014 and SR5014 add Dolby Atmos Height Virtualization Technology to give users an object-based listening experience without the need for dedicated height or surround speakers.

For listening applications, the SR series can also decode up to 24-bit/192-kHz ALAC, FLAC and WAV lossless files as well as DSD 2.8MHz and 5.6MHz tracks. The receivers also support turntables connected via a phono input.

The addition of Auto Low Latency Mode (ALLM) ensures Xbox One users have a more responsive and immersive gaming experience when connected with select TV models that also support ALLM.

Using a compatible smart voice speaker or phone, users can leverage their voice to stream music directly to the SR-series, which can deliver audio to HEOS-compatible speaker in other rooms.

In addition, Audyssey MultEQ XT32 room calibration analyzes each speaker's output (including subwoofers) at up to eight measurement locations and generates precision digital filters to optimize each channel for the correct frequency and time domain response. Audyssey Dynamic Volume also smooths out disruptive jumps in volume (such as TV commercials).

The Marantz SR6014 and SR5014 will be available July 15 from all authorized Marantz retailers.