For professional installers, the new Brilliant smart switches are a seamless solution to bring complete home control to the previously old-fashioned light switch.

Here was my situation: our pastoral home (a converted barn built in 1875) has a mix of technology, all designed to blend in with the old pinewood walls.

And in recent years, no technology has become more important to the family than voice control. Two Amazon Echoes and one Amazon Echo Dot sit in key locations, with Alexa as the preferred means of control for numerous Lutron Caséta lights, three Nest thermostats, and a Sonos wireless audio system.

So when we finally embarked on our years-in-the-planning kitchen remodeling project, the opportunity presented itself to bring integrated controls — and particularly voice control — to the heart of the home.

Installation could not have been easier. For integrators, the Brilliant switches are designed to be so easy to install that there is no need to send your lead technician. The system requires no addition hubs, wiring, batteries or programming.

My local electrician, Nathan Rondeau of J. D. LeBlanc Electric in Sturbridge, Mass., quickly installed three Brilliant switches in various locations with standard three-wire connections. The two-gang model, dubbed the Two Switch controller by Brilliant, was placed in the kitchen next to the side-entry door.

Two single-gang Brilliant units, dubbed the One Switch, were mounted in the over-the-garage bonus room and inside the master suite walk-in closet — two locations where we previously did not have voice controls. Brilliant also offers three- and four-gang models. 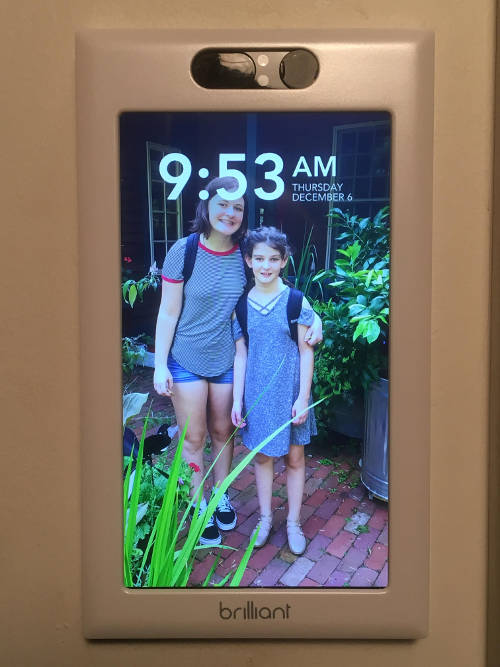 The ability to upload up to 24 images on
the Brilliant switch is a nice personal touch.

Even though he was completely unfamiliar with the Brilliant product prior to the installation, Rondeau was impressed with the ease of install, design, and functionality. He is now even considering getting one for his own home to test out, although he said the higher price points compared to traditional light switches might bring it out of contention for many of his customers.

Once the switches are in, they immediately search for an available wireless network. I simply plugged in my password and the units were hooked to the network.

Since the upstairs bonus room traditionally has spotty wireless coverage, we installed a Netgear wireless extender to strengthen the signal. Bluetooth can be used to synchronize the settings if Wi-Fi is not present.

Besides the Caséta voice controls, the 120V, 5-amp, two-gang switch by the door controls the exterior porch lights as well as the mudroom fixture.

The Two Switch unit includes a 5-inch diagonal touchscreen with 720 x 1280 resolution with two side-by-side touch sliders. You can swipe up and down on the sliders to raise or lower the lights, or just hold to dim.

Each of the switches not only has a camera, microphone, and speaker built-in for interacting with Alexa, but also acts as a two-way intercom. More on that later.

Using the touchscreen on the Two Switch unit, we named the three HVAC Nest zone and the seven lighting zones, which included an additional five Caséta switches as part of the kitchen remodel. We also created several lighting Scenes, including the all-important “Full Kitchen On.” It was very simple. The touchscreen has not large digital buttons so there was very little “fat-finger” syndrome that I am used to encountering on an iPhone. We also added a new Sonos PLAY 1 speaker to the control.

In addition to the devices in my home, the award-winning Brilliant Control also interacts with products from August Smart Lock, Philips Hue, SmartThings, Wemo, Ring, Ecobee, and Honeywell, among others. During setup, many of these devices appear on Brilliant’s interface by default, while others need to be added manually.

Another cool customizable feature is the ability to upload up to 24 images as the screen saver background for the switches. In my case, photos of my hockey-playing daughters and Ginger the puppy were easily uploaded. The photos are a minor element in the grand scheme of the controller, but they bring a nice personalized touch to the technology.

How We Use It

When I say that we now use home control multiple times per day, I mean it. Instantaneously, the ease of access to smart home commands has increased the entire family’s usage of lighting control, thermostat adjustment, and audio, not to mention just asking Alexa questions.

Now, as my daughters prepare for school each morning, asking Alexa what the expected weather is for the day via the Brilliant switch by the kitchen door is a daily routine. The two-way intercom function is also being used regularly.

But by far, the lighting control is our most frequent use, especially since the new kitchen has four separate lighting zones: the pantry area, the cooking area, under-cabinet and over the sink. Only the oven hood light and fan are not controllable via the Brilliant. The ability to turn all four zones on with a simple voice command is a big-time convenience.

Over the air updates to the control software happen automatically, using industry standard encryption. Also, Brilliant can be controlled from the Brilliant mobile app, although we have not used that feature commonly.

Each switch has a motion sensor that activates when someone enters the space. That has been especially nice inside the walk-in closet.

What Would I Change?

There are only a few things I would change about Brilliant. First, the units run a bit warm. It’s not a big deal, but always makes me wary of the power usage when a device is running hot. I guess I will see when the next electric bill comes.

Second, the physical slide cover for the tiny camera is black and small. It is so tiny it is hard to tell if the camera is shielded even with my eyes within 6 inches of the switch. The camera status is especially important since we placed one of the single switch Brilliants inside our master bedroom closet.

To solve this problem (and to put my wife at ease), we added a small colored dot of bright nail polish to the exterior face of the camera shield so now it is readily apparent when the camera is hidden. Since we use the intercom function quite frequently, it isn’t a viable solution to just keep the camera shield slid closed all the time.

For integrators looking for a seamless way to extend smart home controls, particularly Alexa, for clients who can’t (or don’t want to) accommodate a physical smart speaker, Brilliant is a great alternative.

In a nutshell, Brilliant is pretty darn smart.