SnapAV and Control4, along with private-equity firm Hellman & Friedman, are bullish on the market for professionally installed home-technology systems.

Two of the biggest names in home automation and integration, Control4 (Nasdaq: CTRL) and SnapAV, are merging to form one big home-technology company. We don’t know exactly how big the combined company would be, but Control4’s 2018 annual revenues were roughly $272 million … and SnapAV as the acquiring entity is bigger.

SnapAV, acquired by the private equity giant Hellman & Friedman in 2017, will take Control4 private, paying $23.91 per share in cash, representing an aggregate value of approximately $680 million.

Control4, arguably the first pure-play home-automation IPO ever, went public in 2013 at $16 per share, ending the first day of trading at $20.05, valuing the company at over $500 million at the time.

“[W]e will continue to maintain very high standards and certification and training requirements for any dealer that sells and installs Control4.”
— John Heyman, SnapAV

The IPO was viewed as a success for the company, but also an affirmation of the professional home-technology installation channel. In its 16-year history providing home automation, audio, video, lighting control, energy management and other home technologies, Control4 has sold products only through authorized installation firms, never direct-to-consumer (or direct-to-homebuilder, for that matter).

When Plaehn pitched to investors pre-IPO, and even now as the company joins with SnapAV, the CEO touts a “deep cultural and operational commitment to custom installation.”

He tells CE Pro in an interview about SnapAV that the merger plays on both companies’ “core strength” of service to the custom channel.

“It doesn’t need to be taught or changed as we come together,” he says. “That is nontrivial.”

SnapAV, while relatively unknown outside of the home-technology industry, is as fiercely committed to the installation channel as Control4 is. The company was founded in 2005 as an importer of (mostly) commodity products for the pro channel, with one big message: how to run a profitable home-systems business.

“There has been so much written about DIY,” says SnapAV CEO John Heyman. “The reality is that consumers increasingly look to professional installers for their needs – not all of them, but the consumer market is growing, not shrinking for the dealer.”

He adds that Control4 was an attractive partner because of “how they focus on the custom channel and making dealers successful.”

So what would a combined SnapAV and Control4 company look like at CEDIA Expo? 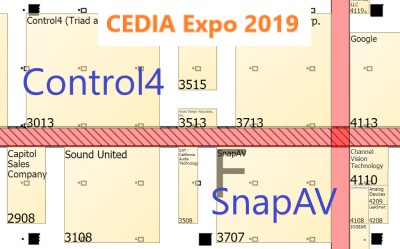 It's too soon to tell, but it will make for an interesting show, to be sure, especially with SnapAV's launch of a new security and home-automation system.

Even so, the two companies are close eighbors on the show floor and they should have an interesting story to tell.

Since its launch in 2005, SnapAV has become more of an engineering firm and less of an “importer,” creating specialty systems for thousands of home technologists, and acquiring several companies to boost offerings in multiroom audio (Autonomic), outdoor displays (SunbriteTV), and video analytics for surveillance (Visualint). The company also has worked with third-party product providers like Lutron and Clare Controls to create specialty solutions for its dealers.

With its relatively young OvrC platform, the company also leads the nascent market for remote managed services (RMS) in the home-technology sector.

This class of products allows service providers to monitor and manage connected devices from afar. In many cases, the providers can diagnose and “fix” issues with the network or attached devices before a client is even aware of a problem.

One long-standing challenge in the home-technology integration business is servicing clients who have multiple systems from disparate providers – in an efficient and profitable manner.

RMS solutions like OvrC and competitors can expose all (or some) of the connected devices in one unified dashboard so dealers can monitor and manage the health of any given smart-home network at a single glance.

One of the platforms is BakPak, the remote network monitoring service that goes with Control4’s line of Pakedge networking products (acquired in 2016). Control4’s more robust cloud service Ihiji (acquired in 2018) monitors and enables remote management of networking gear and Control4 home-automation systems and a large range of devices attached to the smart-home ecosystem.

Historically, Ihiji has offered a richer solution than SnapAV’s OvrC, integrating with a wide range of third-party systems and attachments. OvrC initially worked only with SnapAV’s own products, and a handful of others. Even so, OvrC enjoys broader distribution in the home-tech channel, thanks to SnapAV’s wide reach.

In the 2018 CE Pro 100 brand survey, more than half (54%) of the highest-revenue integrators said they specify the OvrC platform, compared to 39% for Control4’s BakPak and Ihiji services.

For 2019 (not yet published), OvrC skyrocketed to 91%, with BakPak/Ihiji also surging to 63% — easily leading the pack in a very young market.

Ihiji had a long head start in home-control managed services, which explains its rich integration with third-party subsystems. But SnapAV is catching up, having slowly incorporated third-party solutions into the OvrC ecosystem over the past couple of years.

SnapAV is committed to “embracing third-party manufacturers,” Heyman says, “similar to how Control4 has embraced SDDP.”

SDDP is Control4’s device discovery and integration protocol, which has been implemented in a wide range of niche and mass-market devices alike.

Assuming the Control4 and SnapAV deal goes through after a 30-day shop-around period, the combined company would hold a strong position in the market for mainstream and mid-market home technology.

Control4 claims roughly 5,900 authorized dealers worldwide. Nearly two-thirds (65%) of CE Pro 100 dealers in 2018 said they carry the line – more than any other home-automation brand including Crestron (48%) and Savant (43%). These figures held mostly steady in the 2019 CE Pro 100 Brand Analysis.

SnapAV boasts many, many thousands of dealer customers, and you’d be hard-pressed to find integrators who haven't done at least some business with the company.

Together, the two organizations top the CE Pro 100 brand-preference charts for most of the home-technology categories in which they compete.

Absorbing Control4 would allow SnapAV to be a true one-stop shop for home-technology pros.

Related: Rating the Prospects: After Acquisition of SnapAV, What Major Home-Tech Co. Will H&F Buy Next?

In announcing the acquisition last week, Heyman wrote in a statement to dealers that “we understand that providing a true, one-stop shop for all your project needs – one place for products and support – is how we can continue to make your life easier.”

Despite the strength of a combined Control4 and SnapAV, the market for professionally installed home systems is considered fairly immature. Control4 is a home-automation leader with less than $300 million in annual revenues. SnapAV is a leading distributor/product developer in the channel with something more than $300 million.

By comparison Crestron, the leading provider of commercial and high-end residential solutions, has revenues of more than $1.5 billion. To say nothing of mass-market security and home-automation systems from the likes of Ring, Google Nest, Comcast/Xfinity, ADT, Resideo (Honeywell Home) and others.

SnapAV has a very broad dealer base, selling to most installation companies that provide evidence of ongoing business in the field.

Arguably the industry leader in e-commerce and logistics, SnapAV recently began acquiring regional distributors to provide dealers with local resources, including products and expertise. So far the company has large swaths of the Midwest, California and Northeast covered with acquisitions of Allnet, Volutone and MRI, respectively.

Control4 is one of the more broadly distributed brands of professionally installed home automation and A/V systems, but still maintains tight control of its authorized dealer base. As the two organizations come together, Heyman says, “we will continue to maintain very high standards and certification and training requirements for any dealer that sells and installs Control4.”

That is not to say, however, that Control4 won’t broaden its distribution among qualified dealers. While the two CEOs would not comment on growth plans for the Control4 dealer base, Heyman did note, “We think demand for smart-home technology is continuing to explode. We believe more installers over time will be required to meet consumer demand.”

“We believe more installers over time will be required to meet consumer demand.”
— Martin Plaehn, Control4

Echoing the sentiment, Plaehn says, “In order to provide durable solutions, we need a durable, local professional channel in every market.”

These pros, in turn, require a “broad selection of products, business and technical services, and rapid access to product information assistance,” Plaehn continues. “There is a scarcity among all suppliers to satisfy all the different pieces.”

For the past several years, Control4 and SnapAV have discussed potential partnerships or M&A opportunities, and “how the industry needs so much more,” Plaehn says. “We have discussed how the two companies together could add velocity to the pro-installed market space.”

Although Heyman will take the helm as CEO of the combined organization, he notes that the two organizations will “go forward as a unified company, not a ‘roll-up’ of multiple companies.”

As Plaehn notes, “We have 1,200 employees behind one mission to be the very best company. Today, we are both among the best. Together we can become THE best.”

What's next for the combined organization, assuming they seal the deal? Let's just say Heyman believes the private-equity firm that owns  Hellman & Friedman garners “the same respect as Warren Buffett.”

H&F “brought these two winners together,” he says. “We're bringing an investor who believes in this market.”

Continuing the legacy of Control4 founders Eric Smith, Will West and Mark Morgan, current CEO Martin Plaehn and team have remained true to their strategy of providing products and services strictly to the installation channel, even in the face of growing DIY fervor.

Plaehn says it was pretty easy to convince potential investors of the long-term viability of the channel – it is not unlike other local installer networks specializing in plumbing, security, major appliances, HVAC, irrigation, garage doors and other disciplines.

Likewise, Plaehn deflected concerns that DIY home automation would make professionally installed systems irrelevant: “I just asked them, ‘Did you install your plumbing? Your washer and dryer? Your security system? Are you comfortable switching out a light? How complicated are those things?’”

Plaehn explains that whole-house control is “going to be through a professional network for some time. We don’t think it’s going away.”

He adds, “DIY is always going to be a part of it, but it’s not going to replace it.”

Rating the Prospects: After Acquisition of SnapAV, What Major Home-Tech Co. Will H&F Buy Next? (2017)