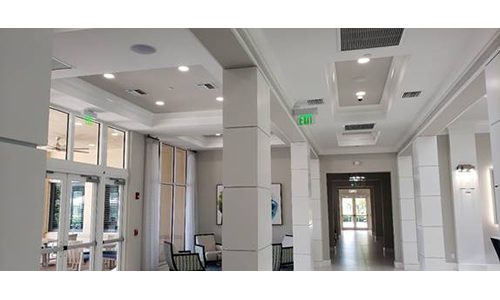 Valencia Isles is a luxury residential community in Boynton Beach, Florida and home to more than 1,000 people aged 55 and over. Professionally Installed Electronix (PIElectronix) was recently asked to upgrade the clubhouse’s lighting, video, and audio equipment during a major renovation.

The 25,000-square-foot community clubhouse boasts a plethora of amenities for their residents including swimming pools, billiards, aerobics, dining, an art studio, conference space, and a ballroom for large events.

Looking to balance the performance the client requested at a price point that was satisfactory.

“With budget concerns to consider, we opted for MSE Audio’s SoundTube products because of the overall quality, superior ease of installation, and perfect price point,” says Eric Manev, founder and president at PIElectronix.

“The project required 83 separate speakers, so the uniformity in preconstruction hardware ensured no mistakes were made in the early project stages. This also allowed us the flexibility to modify the speaker selection in later project stages if needed.”

According to Manev, another important consideration for the job were the durability and aesthetics of the system.

“The other major selling point to us as installers was that all SoundTube in-ceiling speakers are installed using only two screws with strong all-metal hardware. All the competitive products that we considered used four fragile plastic dog-legs making it risky to install with power tools,” notes Manev.

“That being said, the choice was between installing 70 in-ceiling speakers using 140 screws and strong hardware making it easy to install quickly with power tools or, installing 70 speakers from another manufacturer using 280 screws with fragile plastic hardware that can break when installed using power tools. And, the SoundTube speakers sound great. The choice was clear.”

The studio was also fitted with a BSS EC-4BV-WHT-US Contrio Ethernet Controller, an Audio Technica ATW-1301 Wireless microphone receiver with a belt pack and an Audio Technica PRO 8HEcW head-worn microphone with 55-inch cable for instructors to communicate broadly with participating residents. The studio’s sound system was connected to the Sonos player that controls music throughout facility. The Attero Tech unD6IO-BT Bluetooth/Analog Audio Dante Wall Plate was also installed for user convenience.

Per Manev, one small issue that arose during the Valencia Isles installation is that PIElectronix installers noticed a slight difference in the speaker grilles on some of outdoor speakers. They reported the issue to MSE Audio’s Support Services who immediately issued an RMA and overnighted a whole new set of speakers to ensure consistency.

The Valencia Isles clubhouse is now capable of functioning at the level of a smart system, enabling residents to enjoy smooth, warm, evenly distributed sound throughout the building and outdoors, including the pools. Manev says they will gladly continue to consider SoundTube products in projects moving forward, stating, “The SoundTube line of products have more than delivered on the quality of sound and coverage promised by their specifications.”