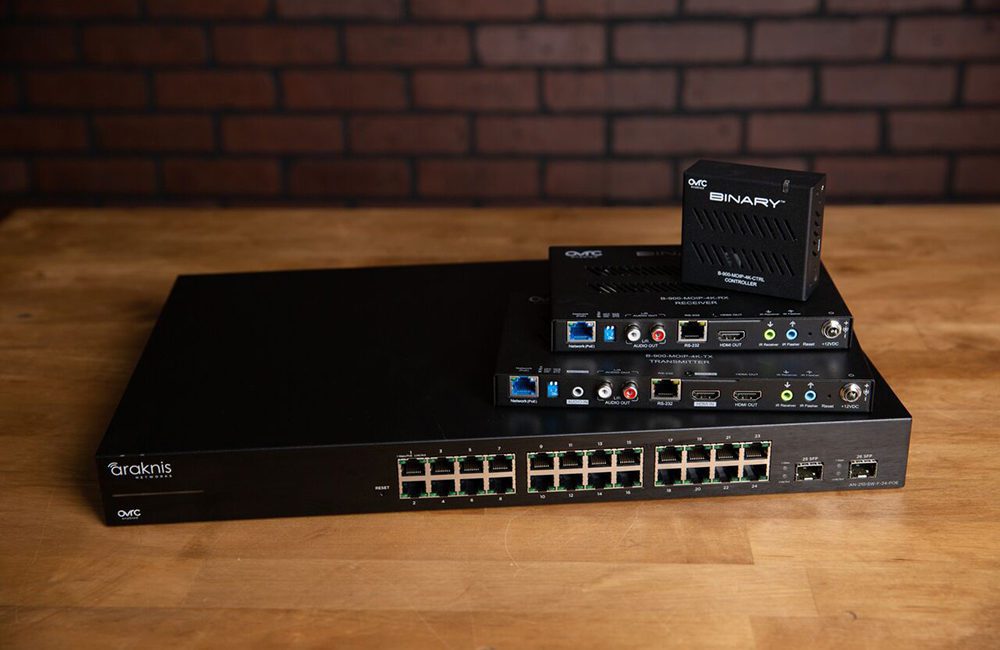 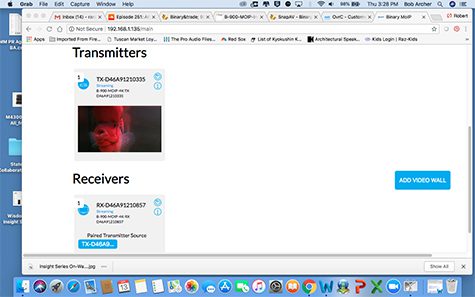 Over the past couple of years, no technology has been hotter in both the residential and commercial A/V industries than AV over IP. SnapAV recently introduced its Binary 900 Series MoIP controller, transmitter and receiver, providing both markets with a competitively priced AV over IP line of products.

Designed to complement SnapAV’s Araknis line of networking products, including its 210 and 310 Layer 2 network switches, SnapAV is streamlining integrators’ ability to offer AV over IP-based systems that include state-of-the-art features such as its OvrC remote monitoring platform.

Integrators can use the products for residential and commercial applications, and the line of products supports integrators’ ability to install scalable AV over IP systems.

MoIP devices support the use of 1080p and 4K displays within a single system, and the company states the system is capable of transmitting 4K, 4K with HDR (at 30Hz) and 1080p resolutions.

Integrators can setup system control via RS-232 over IP, two-way IR routing, CEC, and the products integrate into control systems from top manufacturers such as Control4, Crestron, Elan, RTI, and URC.

SnapAV emphasizes the system installs in just about no time if steps are taken to expedite the setup process.

Going into the switch menu’s Advanced>Multicast>IGMP Snooping I changed the settings to this configuration:

Then apply these settings and in the Settings>Ports, verify Jumbo Frame is set to operate at greater than 8,000 Bytes.

Following these directions I performed these steps, then I grabbed a transmitter, receiver, and the controller and connected them to a 210 Series switch using Cat-6 cables, using the switch in between a Vizio 4K TV and an older Samsung 1080p TV some HDMI cables, and an Apple TV as a source.

While maybe not a few minutes and plug-and-play turnkey, I did find the system installs without much effort. Of course, the exact times will vary depending on the number of displays and sources, but you don’t need to be a network wizard to get MoIP devices up and running.

Before getting into specifics I would like to point out that I actually set up the MoIP system in two separate configurations.

The first as I mentioned was the system with a Vizio 4K TV and a small, wall-mounted Samsung TV located in my kitchen, and the second is a home theater setup featuring a 2017 Sony 800 Series 43-inch 4K television, an Onkyo receiver, and Optoma 4K projector.

I thought this would be the ultimate test for the MoIP system because the 4K Vizio is a relatively new television that includes HDMI 2.0, while the Samsung is several years old and not something ideal for a state-of-the-art AV over IP solution.

As long as integrators use new HDMI cables and newer sources and displays, the system should work flawlessly.

Proving my instincts correct, the MoIP system was not able to work with the older Samsung TV.

Mechanically, the MoIP system was working based on the status indicator on the MoIP transmitter and receiver products, but the age of the TV, which I am guessing is either HDMI 1.3 or HDMI 1.4-based was too much for the Binary system to overcome.

After moving the system to another section of my house, I successfully setup the MoIP system in the aforementioned home theater space.

In this configuration, I did not notice any latency or other abnormalities in the MoIP system’s images with a Dish Network Hopper 3 serving as the main source component.

Trying to trip up the system again, I swapped network switches, grabbing an older Luxul XMS-1008P network switch to see what would happen. To my surprise (based on how the system reacted to the older Samsung television), the system worked without a glitch.

My conclusion is that as long as integrators use new HDMI cables and newer sources and displays, the system should work flawlessly.

Not surprisingly, older HDMI formats and even cables could, however, change system performance to the point that a system may not operate if there are any HDMI related issues.

Aesthetically, in both systems, I was able to basically “hide” or locate the transmitters and receivers next to Apple TVs and Blu-ray players without much fuss. In the first system setup, I placed the receiver behind the Vizio TV to make it completely unseen.

I think the best way to evaluate the MoIP system is to consider an entire SnapAV package.

SnapAV once again lives up to its market reputation by delivering reliable, dealer friendly system solutions.

Sure, integrators can use their preferred networking switches and HDMI cables, but why would someone do that? These products work so well together thanks to the excellence of SnapAV and OvrC, it seems like an obvious choice to use these products all together.

The only real issue integrators could encounter is retrofitting existing systems—and this includes commercial environments such as video walls.

Older displays and sources may not work due to HDMI compatibility issues, so integrators will have to explain the realities of HDMI to clients up front.