“The trend in bigger TV screens at home continues to grow, and Laser TV is a compelling solution, with its massive screen, super-bright 4K laser projection, and smart TV features,” says Ken Welty, director of Laser TV at Hisense USA. “Hisense introduced the world’s first ultra-short throw Laser TV in 2014, and have always understood its potential. With LCD TVs reaching increasingly bigger sizes but still at astronomically high price points, we’re bringing an alternative big screen technology to consumers that they can enjoy just like they would an LCD or OLED, but at a much more reasonable price point for the size of the screen.” 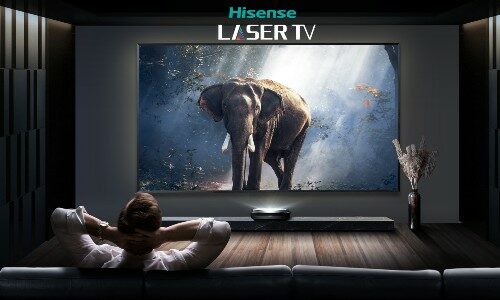 The Hisense L9G comes in several options, depending on viewers’ preferences and home setup. For those looking to build a dedicated home theater and achieve full viewing immersion, the L9G with ALR Cinema Screen offers color accuracy with wide viewing angles. For others whose interest is in displacing their main TV in a bright, airy living room, the L9G with ALR Daylight Screen may be the better option as this screen configuration offers increased on-screen brightness and ambient light rejection capabilities for viewing in brighter surroundings. In fixed 100- and 120-inch sizes, consumers can choose an option that best fits their space and intended usage.

The L9G Laser TV, including a 100-inch ALR Cinema or ALR Daylight screen, is available now for $5,499.99 MSRP through Hisense’s authorized reseller channel, which can be found at