AcousticSmart Travels to Mordor for Lord of the Rings Home Theater

A sci-fan who contracted Nashville-based Visual Concepts and AcousticSmart for a new themed home theater wanted an over-the-top theater that even Gandalf the White’s magic couldn’t conjure up.
Robert Archer 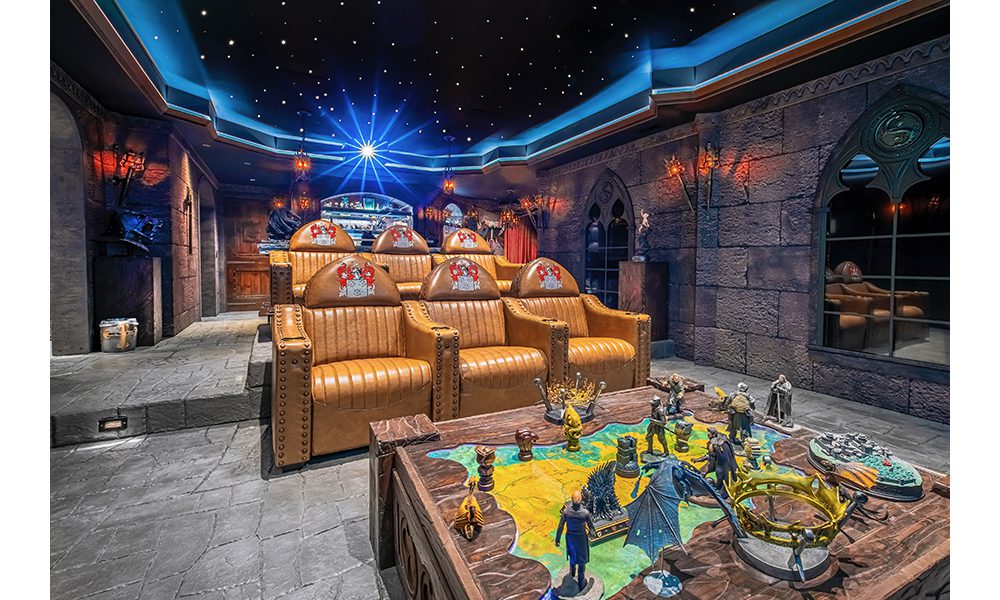 As part of a custom Lord of the Rings home theater from AcousticSmart, the N.Y.-based company manufactured custom theater seating that included the client's coat-of-arms in the chair design.

AcousticSmart Travels to Mordor for Lord of the Rings Home Theater

Over the years, there’s no question the custom installation industry has benefitted from word-of-mouth and repeat business. Richard Charschan of the N.Y.-based firm of AcousticSmart’s latest high-end installation perfectly represents the value of referrals and return customers.

Having successfully delivered a Game of Thrones themed home theater to a sci-fi enthusiast client that wanted a taste of Westeros in his home, the client came back to Charschan and his team for another over-the-top creation.

After purchasing a new home, the client wanted to take his next theater to Middle Earth, so he once again charged AcousticSmart and the Nashville-based integrator Visual Concepts with the task of designing and installing, a high-performance, unique Lord of the Rings home theater.

After sitting down with the client, one of the homeowner’s main objectives with the Lord of the Rings theater was it must take performance to the highest possible levels his budget would allow. Charschan says the client and his team determined that acoustical design needed to be a priority, and to build upon the foundation of a proper room design AcousticSmart worked with Pro Audio Technology to develop a commensurate audio system to complement the room design.

Handling the processing for the system, Charschan notes that it was decided upon by his team and Visual Concepts, the processing in the Game of Thrones theater could have been better so a StormAudio processor was used in the Lord of the Rings system.

“As far as doing the design, we had just finished doing an Egyptian theater that had won a ‘Best of CEDIA’ award with Gramophone, so we showed the client that design, and said ‘look what we can do,’” states Charschan.

“We can make it look like the inside of a castle, like a Game of Thrones castle but it will be acoustical treatment behind it so it will look like real stone. So real in fact that when you go up to it, you won’t realize it until you touch it. Then you’ll realize it is fabric.”

Once the design concept was settled, he says the client wanted to incorporate other elements, including a concession area for the space and this Lord of the Rings item that he found. The item was scanned into AcousticSmart’s Mac-based 3D computing system that the company was able to upscale the scan’s resolution and integrate it into the home theater design. 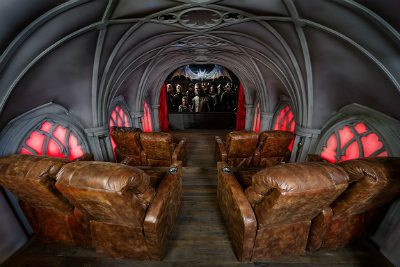 “When you go into the room and the concession area you see this circular, beautiful image of these Lord of the Rings characters walking, and it is all lit up,” he comments.

“And, he had a collection. He has a great collection of stuff that he was going to put in another room. He’s very into superheroes and Lord of the Rings. There’s also the other theater; the Game of Thrones theater and some items from that collection.”

Other things that Charschan says that are noteworthy in the Lord of the Rings design include the use of some displays setup in portrait mode to look like windows. The displays are connected to a Kaleidescape system that shows a script and when the lights dim a video plays of live dragons from the Lord of the Rings movies and it looks like they are fighting outside.

Charschan stresses another unique aspect of the new theater is its floor.  The floor is stamped concrete that was done by hand. If you take a closer look at the design in the floor, he explains the engraving is the family’s coat-of-arms. The same coat-of-arms is included in the design of the theater seating and those coats-of-arms were all hand sewn and custom tailored for the client.

“The seats actually have an articulated headrest,” he boasts.

“We built the seats ourselves. We can tilt the seats forward so when the client is watching a movie, he has total head support. The seating is also style to look like you’re on a throne like a king.”

Staying with the medieval theme the AcousticSmart team made these claw-like hands that are mounted to the theater’s walls. These claws are holding the client’s collection of medieval knives and swords. Complementing the swords are these old-world looking drapes and sets of armor made by a famous Hollywood props designer.

Getting back to one of his original points about the new theater, Charschan says that Paul Hales of Pro Audio Technology sent one of his employees out to calibrate the theater.

Meeting the clients’ request for the highest possible performance, he continues, the room now delivers “magic.”

“It’s so immersive,” says Charschan describing audio quality of the Lord of the Rings theater.

“What we try to do is we want every theater to be that when you go into this room you forget where you are for those two hours. We want you to get—and we call it the suspension of disbelief. This is what people in my industry do. When they really want to do a room right, you go into this room, and you just get caught up in what you are watching. You get that here in this room. You don’t even have to crank it up because it sounds just so good … even on music it sounds great.”

Comparing the new room to the client’s previous Game of Thrones themed theater, Charschan recalls the older system didn’t provide Dolby Atmos audio, the room didn’t have the level of acoustical engineering the new system has, and the older theater did not have an AV processor that offers the power of the new StormAudio component.

Summarizing the entire process of the design, including the buildout of the room, the construction of the Lord of the Rings home theater with items such as an acoustically isolated ceiling took about a year.

“When you do a room like this, it’s not about the profit. It’s more about having the passion and enjoying the ride,” he admits.

“There are always obstacles along the way, and you must find people — this is not your normal room. To do these rooms you need specialty artists to come in. These people support our team, and their job is to basically help us create and build what we actually design and create from the imagination of the client, whatever the client’s inspiration is.”

Here are some of the components in the AcousticSmart Lord of the Rings Home Theater: