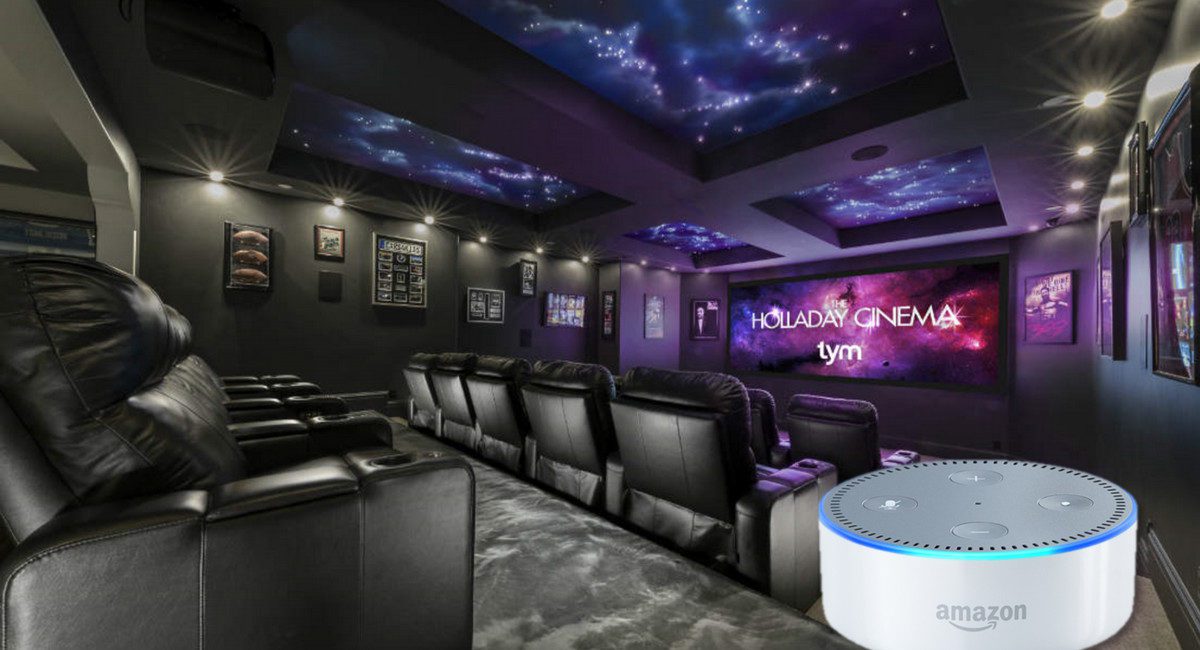 The mural on the home theater's ceiling has 1,200 individual stars crafted from 7 miles of fiber optic filament, painstakingly arranged by the integrators at TYM Smart Homes in Salt Lake City. 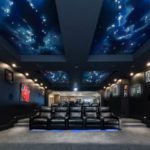 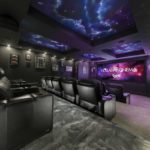 A home-theater with a 200-inch screen, 7.1.4 Dolby Atmos surround system, Kaleidescape 4K movie server, and 14 motorized leather seats, is not all that interesting these days. But toss in a sick starlight ceiling, $100 Roku HD box and $50 Echo Dot, and now it starts to get pretty cool.

Designed and installed by TYM Smart Homes in Salt Lake city, the “Holladay Cinema” earned a 2018 CTA TechHome Mark of Excellence Award for Home Theater of the Year.

The hallmark of the space isn't necessarily a big screen and bright, high-resolution images from a 4K projector. It's the ceiling — the “TYM Signature Star Ceiling” — featuring 1,200 individual stars crafted from seven miles of fiber-optic filament.

These star ceilings have become something of a trademark for TYM. In this case, the craftsmen strayed from their usual random star patterns to create a design with celestial clusters and more negative space.

Beyond the fun stuff — creating the ceiling design — TYM had to solve several technological challenges in the cinema.

First, the space is large and open, so there was no back wall to house speakers or block out light from the backyard. For this ambient-light challenge, TYM commissioned a custom video-projection screen from Draper, and coated the walls with dark matte paint.

Another key challenge for this job was a tight timeline. The home was to be part of the 2017 Salt Lake Parade of Homes, and the  integrators had to work quickly and efficiently. Fortunately, TYM has done its share of parade homes, and was able to prioritize the key projects to best showcase the design and features of the cinema.

And then there's a powerful little $100 Roku HD box streaming every other type of content that Kaleidescape doesn't support.

Running it all is a Savant home-automation system, including a Savant Pro remote and mobile app. A $50 Amazon Echo Dot enables voice control of the system — simplifying the control of what could otherwise be a very complicated set-up.

For example, if someone says, “Alexa, turn on movie night,” the projector and systems come to life, while the lights in the bar area and the theater slowly dim.

Similarly, saying “Alexa, turn on snack time” causes Kaleidescape to pause the movie, while the lights raise enough to make your way to the kitchenette behind the bar.

While homeowners can enjoy movies and TV in the theater, they can also view the surveillance cameras that cover the property. If the owners want to host a bigger party, they can mirror any content (full screen or video tiled) from the cinema screen to other displays in the house, like in the game room or hot tub area.

View images and more details in the slide show.