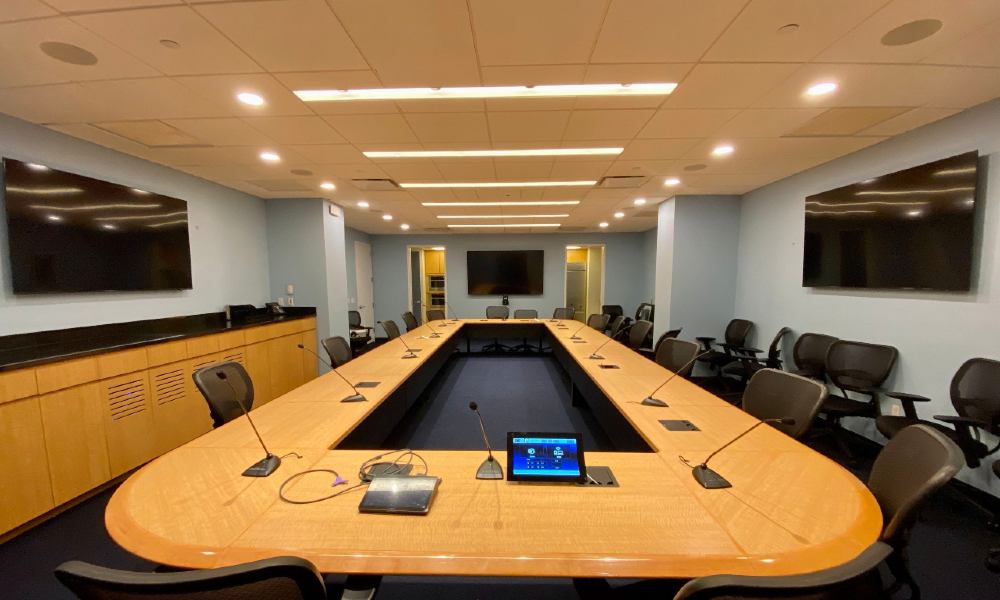 Meetings are much more robust than they were 10 years ago, and can gather people from virtually anywhere. There are multiple video conferencing platforms that have risen to prominence(Microsoft Teams, Zoom, Webex, Google Meet, etc.), as everyone became familiar with during the pandemic. Adding to that, in-office participants need to be able to connect their laptops and other devices quickly to share content to room displays or projectors.

To get the room meeting-ready also includes adjusting the lights, turning on displays and video cameras, quality audio via microphones and speakers, etc. It can be complex for users who don’t have time to wrestle with technology. That was the case with a corporate boardroom for a company based in New York that sought out the AV expertise of Joe Mattera, owner of Mattera AV Design. He ideated and programmed an extensive AV system for the 40 x 15-foot boardroom that could launch meetings in seconds and be intuitively controlled using RTI.

“The client wanted a lot of options — multiple laptop inputs, videoconferencing via Teams as well as other web-based conferencing platforms, lighting and volume control, plus the ability to send any presentation device and videoconference to any display or all at once,” Mattera reports.

Because of the size of the room the client needed exceptional audio quality and coverage throughout the entire space. To deliver high-quality audio for both the near end and far end during a video conference, Mattera AV Design installed 13 Shure MX418D/S gooseneck mics, 10 Sonance Pro Series PS-C63RT speakers, and Snap One Episode 70V IP-Enabled Amplifier with Biamp DSP.

Another primary focus was ensuring visual meeting equity so participants would be able to see and give presentations and lead video conference sessions from anywhere. Mattera installed an 86-inch LG display outfitted with an Atlona HDVS-CAM-HDMI PTZ camera and flanked by two Samsung 75-inch displays. 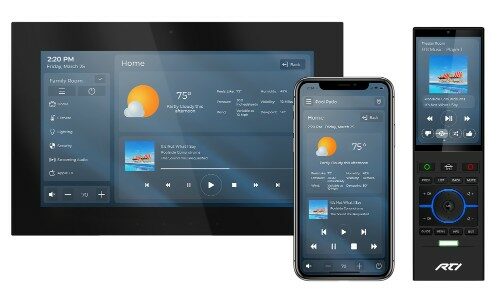 The RTI control ecosystem unified the experience with intuitive control customized for the room. Users can control the entire system, including the Lutron lighting system from the RTI KA11 10-inch touchpanel and the RTI Control app running on an iPad. The GUI interface has been customized down to the last detail using RTI’s Integration Designer to ensure users can command and control the room’s AV devices and start video conferences with a tap on the touchpanel.

Integration Designer enabled Mattera to achieve a faster, more-efficient installation with advanced customization thanks to auto-programming that adds efficiency to every project. The built-in driver library, added for the latest Integration Designer 11 release, enables integrators to find all drivers without leaving the software and searching on a separate driver site.

The RTI XP-8v control processor acts as the brains of the system, with status feedback from controlled devices, eight RS-232 ports and eight relay ports each, as well as eight multi-purpose input/output control ports and eight programmable 100mA/2VDC outputs each. The processor leverages the extensive RTI driver database to facilitate the integration of third-party devices for the smart business, such as audio and video distribution, lighting, shades, security, and HVAC.

The XP-8v programs quickly with Integration Designer, and compatibility with any RTI controller or app make it ideal solution for large-scale and complex projects. The client wanted to avoid the bad experiences they had had in the past with programming and reliability from their own system from another brand, Mattera notes.

With RTI, Mattera AV Design also wowed the client by enabling macros to quickly launch a meeting at the touch of a button. All displays turn on, lights dim to a specific conferencing level, inputs change to the dedicated Teams device, and the conference is ready to go. When users need to plug in their own devices and/or conduct a video conference from other platforms, it’s just as seamless.

“The client was blown away by how simple it is to control everything from the customized RTI user interface,” Mattera says. “They’re so impressed that they’re currently expanding to another floor and want the same system built in the second new boardroom. They love the fact that the system is basically hands off and they don’t need to have IT staff on standby for support whenever they have a meeting.”