SnapAV entered the home-tech marketplace more than a decade ago with the strongest e-commerce platform the channel had ever seen. The platform grew to include e-learning and other digital services, as well as a smart-home back-end, OvrC, for remotely monitoring and managing connected devices.

SnapAV started out selling commodities like cables, connectors, furniture and video projection screens, but when the company started offering more advanced systems like OvrC, it became more important to have local resources guiding home technologists into new digital territories – not just OvrC but technologies such as video analytics incorporated into SnapAV’s Visualint brand of surveillance systems.

“This is the piece that closes the loop for SnapAV.”
— SnapAV CEO John Heyman
on local distribution services

The company has focused heavily on dealer services through e-training, e-commerce, and remote support, says CEO John Heyman in an interview with CE Pro, “but SnapAV has not been able to act locally like Volutone and Allnet.”

When Heyman and his cohorts went into the field with Allnet salespeople, they observed strong relationships between Allnet reps and their dealers, both large and small.

“We observed the same thing with Volutone,” Heyman says. “We realized how important well-trained, culturally similar people like SnapAV who bleed dealer success were. … They’re not just taking orders.”

Volutone and Allnet go above and beyond, Heyman says, by delivering product to jobsites, and taking training on the road. “This is the piece that closes the loop for SnapAV,” he says.

While SnapAV has warehouses in Dallas and Fresno, Calif., they’re strictly for more efficient shipping to dealers in the region. They don’t serve as relationship hubs.

On the other hand, Volutone and Allnet do a large amount of will-call business (70% in Volutone’s case), using the opportunity to mingle with dealers, introduce them to new products, and sell more stuff.

“We’re friends with our customers,” says Volutone principal Trevor Hansen, the great grandson of one of the company founders who opened the distributor in 1902. “We’re really touching the dealers every day.”

What About Third-Party Vendors?

How are the competitive brands responding to the new SnapAV ownership?

SnapAV’s powerful marketing and business-development resources boost exposure to all brands, Whinna says, and provide “tools to take Allnet to the next level.”

He says response from vendors has been mostly positive, although some have decided to part ways with Allnet, representing about 2% of Allnet’s business, according to Whinna.

“We gave our word we’d continue with the same strategy,” Whinna tells CE Pro. “Being a distributor is about offering choices. We haven't really changed that formula.”

Adam Levy, a SnapAV co-founder and current EVP, says internal research shows dealers are involved in “virtually every category” SnapAV carries, but “but they don’t standardize on brands. Dealers need selection. It would be fiscally irresponsible to try to serve every dealer in the industry with our products.”

He says vendors seem to be finding that “having SnapAV at Allnet brings lots of dealers in that otherwise would not be there.”

Having said that, the local presence has been a boon for OvrC. Whinna says Allnet spends “a lot of time talking about OvrC.” There’s a dedicated display in the branches, showing how the platform can be integrated with third-party brands.

As for those third-party brands, SnapAV has no plans to standardize line cards across all distributors. SnapAV itself already sells and supports third-party brands through its portal, generating some 5 to 10 percent of company revenues from those brands.

The good news is that SnapAV has money to spend, with the “strongest financial partner in the industry,” Heyman says of Hellman & Friedman, the private equity firm that acquired SnapAV in 2017.

With $15 billion in capital, H&F is investing in this industry like no one else, according to Heyman: “This is unique to SnapAV. It’s important for our industry to have that kind of partner.” 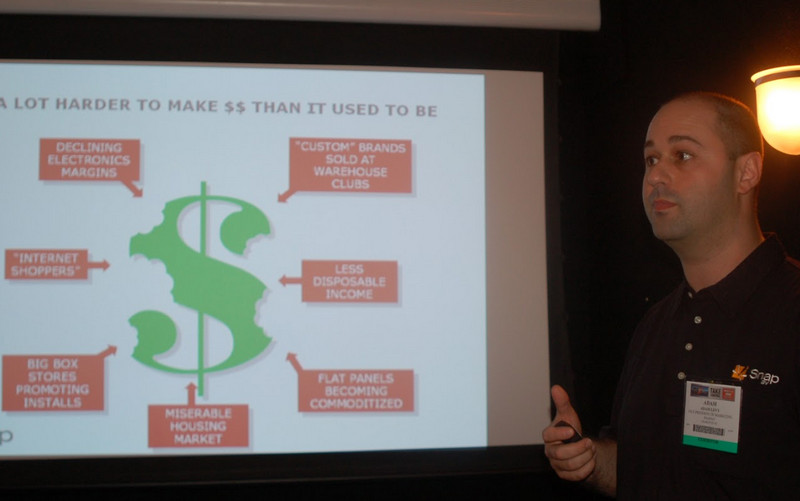 The Changing Landscape of Home-Tech Distribution

It’s been a crazy year for low-voltage distribution. Volutone is big loss for the Powerhouse Alliance, a regional distribution network it co-founded in 2009. With the SnapAV acquisition, Hansen is resigning his post as president of the group.

Hansen credits Powerhouse and executive director Dennis Holzer for “helping Volutone get to this stage.”

Wave Electronics, the original Texas anchor for Powerhouse, left the group in 2012 when it decided to expand beyond its original territory. (Powerhouse picked up Electronic Custom Distributors for the territory).

ADI, the big daddy in low-voltage distribution, was spun off this year from its former parent Honeywell International. ADI and the residential security and home-automation arm of Honeywell now comprise the new public company Resideo (NYSE: REZI), with about $4.5 billion in revenue.

Will SnapAV acquire more distributors and add more local branches nationwide? Most certainly. Both Volutone and Allnet already had plans to expand when they were acquired by SnapAV.

SnapAV won’t exactly say they plan to gobble up branches to create a national distribution powerhouse, but we can infer they’ll spread beyond the Midwest and SoCal regions.

“If I’m a dealer in a major area, should I expect SnapAV to want to serve locally?” Adam Levy posits. “The answer is yes.”

Charlotte, NC ­– November 13, 2018 – In line with its mission of making its dealers’ lives easier, SnapAV has acquired Volutone, the leading regional distributor in the United States. Volutone has been in business for more than a century and currently operates seven locations throughout Southern California and Las Vegas, offering a portfolio of leading brands backed by expert service and support.

SnapAV’s acquisition of Allnet earlier this year has seen tremendous response, reinforcing the notion that having a local presence is important to both dealers and the industry. The Volutone acquisition allows dealers to purchase SnapAV products at each of their locations, in addition to the Volutone distributed brands they currently carry. SnapAV, Allnet and Volutone will continue to support an unprecedented product portfolio with the dealer-first approach and unparalleled service for which they are known.

“If you truly want your dealers to be successful, you have to give them access to the best brands and help them be more productive in their own businesses,” said John Heyman, SnapAV CEO. “Dealers are busier than ever, need more training, and have customers who want everything ASAP. We also recognize that they like to have choice in the brands they select. We aspire to continue to build great products for the industry, but we understand that many brands offer amazing value for our customers and it is important that we provide choice.”

“We expect to build upon the Allnet success with Volutone,” continued Heyman. “We’re changing local distribution as you know it. We’re giving professional integrators access to the best brands, the best service, the best training, right in their backyard. We have been renown for being easy to do business with, and now we’re taking ‘easy’ to the next level. Dealers can get everything they need for a single job with one stop and, in some areas, we can even deliver directly to the job site that day.”

Volutone will retain its name, locations, team, and policies moving forward. Trevor Hansen will remain in his current role as the President of Volutone and become a shareholder in SnapAV.

“We’re thrilled to join the SnapAV family,” said Hansen. “We’ve always had our dealers’ interests at heart, and it’s clear that SnapAV takes that same approach to their work.”

SnapAV products will be available through both the Volutone website and distribution locations in the coming weeks. For now, dealers will continue to order where they so choose, through either SnapAV or Volutone, and all services and support will remain the same.

Both SnapAV and Volutone dealers will receive communication in the coming weeks regarding further details.

“SnapAV has always looked for ways to revolutionize the industry,” concluded Heyman. “Over the years, we’ve added dealer benefits to every aspect of our business. Now we want to bring those benefits closer to integrators everywhere.”

Established in 2005 and based in Charlotte, North Carolina, SnapAV is a manufacturer and exclusive source of A/V, CCTV and networking products for professional integrators. As an industry leader, SnapAV helps integrators build their businesses by providing a wide range of high-quality products, easily accessible through an intuitive website and backed by award-winning service and support. With a vast catalogue of today’s most popular brands, SnapAV is the premier choice for professional integrators across the globe. Additional information about SnapAV and its products can be found at www.snapav.com.

With more than 115 years of innovation, Volutone leads the industry in customer service, quality products, and cutting-edge technology. Their knowledgeable sales staff is committed to building strong, long-term business relationships, one customer at a time. With seven convenient state-of-the-art facilities located throughout Southern California and Nevada, Volutone is here to service the “Technologist.” Volutone supports more than 140 of the top leading manufacturers and continues to bring you the latest in technology. For more information, visit www.volutone.com.