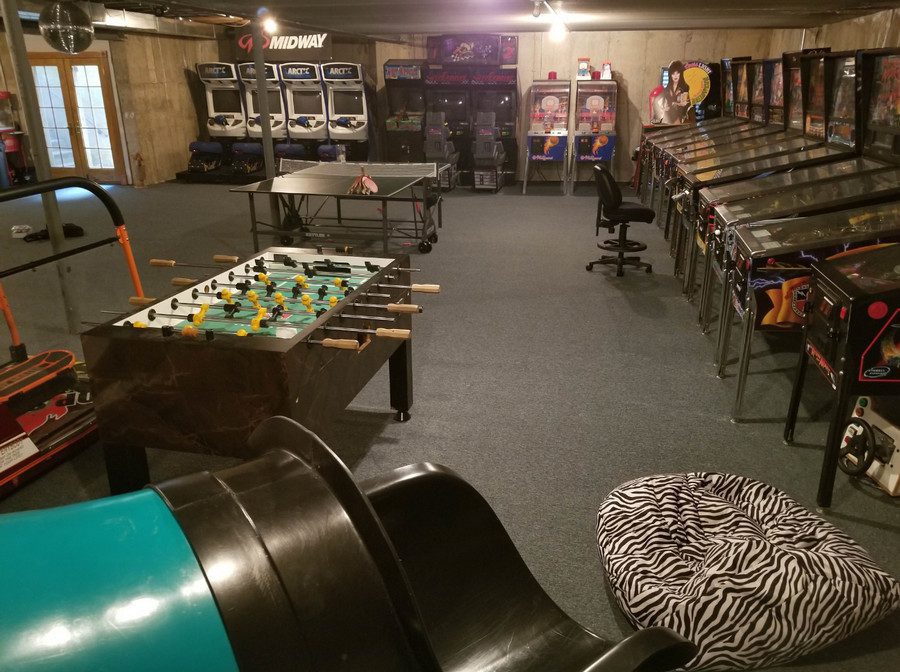 When a world-famous pinball and video-game designer like Brian Eddy builds a custom home, you know it’s going to be designed around technology and fun. And it is. Built in 2001, the 7,000-square-foot suburban Chicago home includes a sprawling basement for the iconic machines he created, like Attack from Mars and Indiana Jones.

Residents and adventurous guests can access the arcade via a fire pole from the second floor or – for the meek – a giant twisting slide from the first.

All the whiz-bang technological features built into his machines would grace his abode as well. But not in 2001 when the place was built. He wasn’t impressed at the time with the current state of home automation, according to Doug Buchan of the CEDIA-certified home-technology firm Buchan Consulting LLC.

That’s not surprising coming from a guy who creates the ultimate in graphical user interfaces.

So Eddy installed a hardwired HomeWorks lighting-control system from Lutron back then, along with several zones of audio, but held off on a complete home-control system. Still, he had the foresight to run miles of cable behind the walls, waiting for smart-home technology to catch up with the ease and energy of a classic arcade game.

By now, Eddy likes what he sees in home automation, especially the stuff from Elan Home Systems, a Nortek company.

Buchan says Eddy looked at all the usual suspects in custom home automation but what “really helped seal the deal was showing Brian the live user interface on my tablet.”

Buchan runs a showroom with a full slate of connected gear — lighting, shading, cameras, thermostats, media, power management, and the rest of it.

“We’re proud of the interface we’ve created and we’re proud to show it off to clients,” Buchan says. In this case, the live demo paid off. 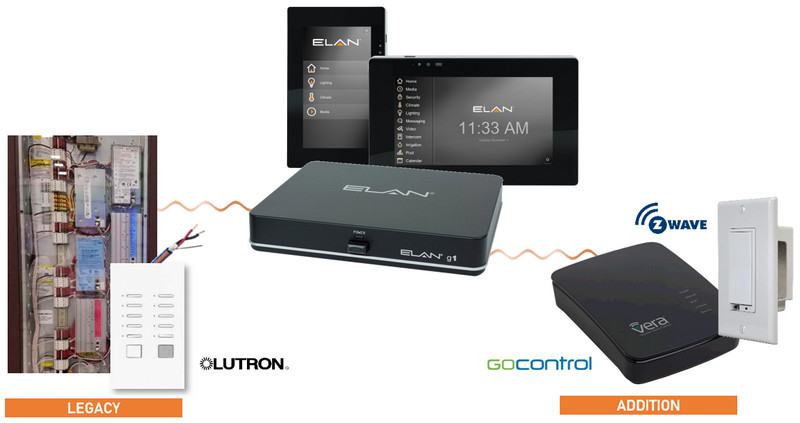 The home already had a fully functioning Lutron HomeWorks lighting control system. Buchan Consulting installed Nortek's GoControl Z-Wave dimmers for the new loads, linking them with a Vera Edge hub that communicates via IP to Elan. Vera software is deeply integrated in Elan's configuration software, so all of the lighting — whether from Lutron or Z-Wave — looks the same to Elan and to the client. (stock photos, not from client)

For Eddy’s 2018 remodel, Buchan had to assess the existing Lutron HomeWorks system – controlling all existing loads – and how best to integrate it with new lighting controls for additional loads.

After considering the many good options, Buchan and Eddy decided on Z-Wave (Nortek’s GoControl) for the retrofit loads, including lighting and garage door controllers. Z-Wave is also used for automated door locks.

Z-Wave?! With Lutron HomeWorks? Buchan says he’s lived with Z-Wave in his own house, and it’s easy to integrate into Elan with the addition of a Vera hub. 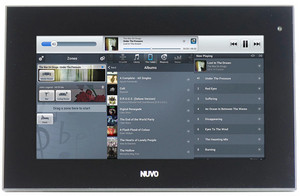 “Brian wanted to be able to readily customize scenes in the kitchen and master bedroom,” says integrator Doug Buchan, “so we gave him the Elan panels in those rooms.”

The Elan TP7 ($1,050 MSRP) allows the user to create and edit scenes on-the-fly, and offers features like an alarm clock (for bedroom) and motion sensors (for triggering pathway lighting to bathroom).

“What we've been doing is putting a Vera Z-Wave controller on all of our $20,000-and-under jobs with 10 Z-Wave dimmers to get the customer started on lighting control,” Buchan says.

Compared to other popular pro-oriented wireless solutions, Buchan says Z-Wave was about one-third of the price. He concedes that the device-enrollment process isn’t as seamless as competitive solutions, but “it’s been stable for us once it’s up and running.”

Elan integrates the HomeWorks and Z-Wave lighting as if they were all the same, according to Buchan: “They work seamlessly together and no difference was seen by the homeowner when controlling lighting through Elan’s interface.”

As for audio, the home already had 12 independent zones, but the music died at least a decade before Buchan arrived – as if the Eddy household was being punished for a tilt.

Buchan installed a pair of Elan’s 1616A multiroom audio amplifiers (see the rack), serving over 30 speakers in the house, including a home-theater zone. An Autonomic music server streams audio from Eddy’s PC as well as online services.

Eddy’s entire system is protected using Panamax Bluebolt surge protectors and power-management systems. On top of that, Buchan offers remote system monitoring, diagnostics and service via Domotz, which integrates with Panamax, “so all of our Bluebolt power features are accessible via Domotz and on the customer-facing Violet [Domotz] app we give to our clients.”

Buchan says the system is well-designed to avoid truck rolls, much as he likes hanging out in the pinball wizard’s crib.

Through Elan, Buchan techs can program the system remotely. Blue Enables remote power management and reboots. And Domotz “gives us access to nearly anything in the system, from Autonomic streamers to Sony receivers.”

All Buchan projects include Domotz now. The company launched its customer-care offerings one year ago and has been tweaking it along the way.  Prices for the service range from $10 per month to $55 per month.

“The foundation for pricing these plans was Best Buy's pricing structure for Geek Squad's Total Tech,” Buchan says. “We figured Best Buy probably did a lot more market research than we were capable of and must have decided that $199 per year was what customers were willing to absorb in terms of system maintenance costs. Their  program was helpful in providing the foundation for our program, and of course we feel we can provide more custom care than Best Buy, justifying the 33% higher rate.”

The $25 plan became Buchan’s “Technology Manager Gold” plan. Above that is the $55 Platinum plan (outlined below).

“Every one of our service plan customers so far has chosen Gold or Platinum,” Buchan says. “We're thrilled that we have a way to monitor our systems and know, even if we can't fix the problem remotely, that we'll have to roll a truck on Monday morning when something goes down on a Sunday afternoon. It helps us prevent, fix, or anticipate problems.”

As for the pinball wizard, who continues his gaming career as president of Zynga’s Spooky Cool Labs, “I’m thrilled with the control, security, and entertainment,” he says. “This system had its foundation laid when I built the house and it’s finally literally at my fingertips.”

Check out the image gallery: a fire pole, slide and arcade!

Buchan offers four levels of Technology Manager service for residential customers (and one for commercial), starting at $9.99 per month. The company borrows from Geek Squad's Total Care for its pricing model.