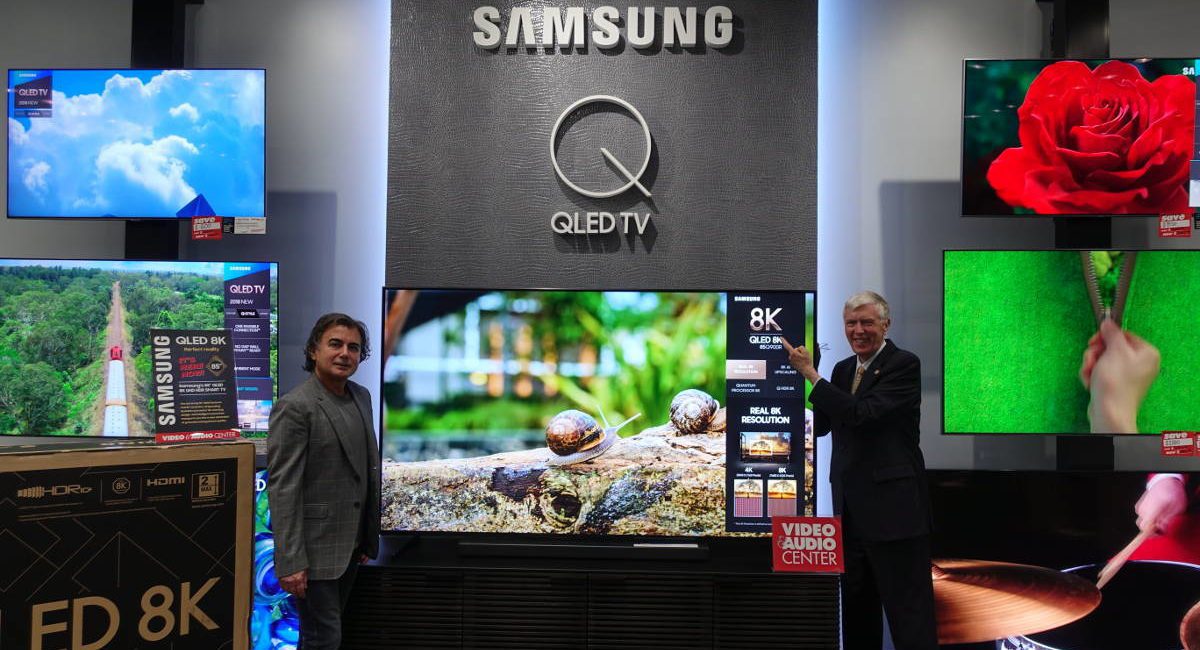 Just One Touch/Video & Audio Center in Los Angeles reports that showcasing 8K TVs has increased 4K display sets among customers. Joseph Akhtarzad (left) and Tom Campbell are just as excited now about 8K as they were last fall when they first demo'ed the giant 85-inch Samsung 8K TV.

If you want to showcase 8K for clients, the time is now!

CES 2019 was the big coming-out party for 8K TVs. Sony, LG, Samsung, Sharp and TCL all showed their new 8K displays, and judging from the throngs crowded around them in Las Vegas, the TVs were well received.

But every integrator knows that other than the demo material there is no 8K content. CBS has announced it will use several 8K cameras in the end zones with “augmented reality” during Super Bowl LIII on February 3 (as well a 16 4K cameras from its total 115 cameras on site.)

NBC has announced the 2020 Olympics in Tokyo will be shot in 8K.

But according to CE Pro 100 integrator Tom Campbell, corporate director/chief technologist at Just One Touch/Video & Audio Center in Los Angeles, the lack of content is a weak excuse for integrators to not offer 8K TVs to their clients… now!

Just One Touch has already sold 103 85-inch Samsung 8K displays at $14,999 a pop since the sets debuted last October. That’s $1.5 million for those of us who are math-challenged… at solid margin by the way. But the real windfall for Just One Touch from offering 8K sets has come in its the 4K display sales.

“8K has enhanced our 4K sales… no doubt about it.”
— Tom Campbell, Just One Touch/Video & Audio Center

“We were concerned that selling 8K displays would impair our 4K TV sales, but just the opposite has happened. It has spurred out 4K TV sales. Because the price points for 4K sets are substantially lower than 8K, customers go for it after they see the 8K,” says Campbell.

Just One Touch, an HTSA member, just completed its best holiday sales season ever, much of it from 4K TV sales.

“Remember, 4K was just introduced two years ago. Back then, we said the same thing about lack of 4K content that we are saying about 8K content now,” remarks Campbell.

At Just One Touch, the sales team upconverts a 4K signal to the 8K sets for demos. Campbell admits the market for 8K is primarily among affluent, early adopters only right now.

In the run-up to the Super Bowl, Just One Touch is holding an 8K “Big Game Event” in a private location in tony Bel Air, Calif. The company will be setting up 8K TVs and inviting its top clients and celebrities for an all-day catered event.