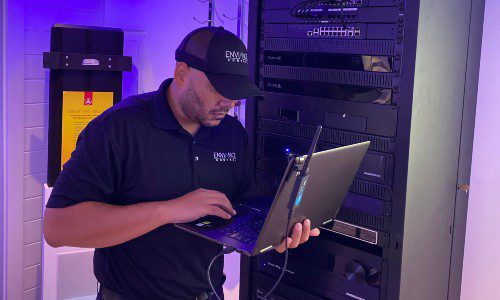 Few people would buy a car without taking it for a test drive, purchase a new home without a tour of the property, or even settle on new paint color without first posting a few paint chips on the wall to compare. Most people want to see, touch, and experience things first-hand before investing in them.

Granted, homeowners can’t “see” or “hear” a Wi-Fi signal as it connects a laptop to the Internet, for instance. But they know it’s working when they’re able to work, learn, and play from home without any glitches from their connected devices … and that it’s not working when connections are spotty and slow, as Coello reports.

However, there’s really no opportunity to shop around and try different options, so many consumers simply buy well-reviewed equipment from Amazon or the router offered by their ISP.

To help illustrate the differences consumers can get with a professionally installed, enterprise-grade networking system – like drastically improved speed, range and reliability of their Wi-Fi – Coello has taken this matter into his own hands.

Enviance Control conducts for every customer a side-by-side comparison of an off-the-shelf networking system and an enterprise-grade solution from Access Networks. It’s really gotten the point across, Coello says.

“Since providing the two-hour demonstrations, I’ve had a 100% close rate,” he enthuses. “There’s never any pressure during a demo for the customer to purchase. It’s meant to educate them on the advantages of an enterprise-level home network, and when they see how much faster and reliably the connections are, they want to invest.”

Initially, Coello orchestrated the Wi-Fi comparison at his company showroom, which also features audio, video, control and lighting technologies. But during the pandemic, he’s taken his Wi-Fi show on the road.

Armed with Access Networks equipment including a wireless controller, wireless access points and a stackable switch, Coello visits the homes of customers who’ve expressed dissatisfaction with their current Wi-Fi setup – something integrators have become accustomed to in 2020 as families worked and schooled from home.

“I have the customer download the Wi-Fi measurement app onto their own smartphone, so they know the test is fair,” he says. “The difference is dramatic, with the Access Networks access point easily registering two to three times faster.” 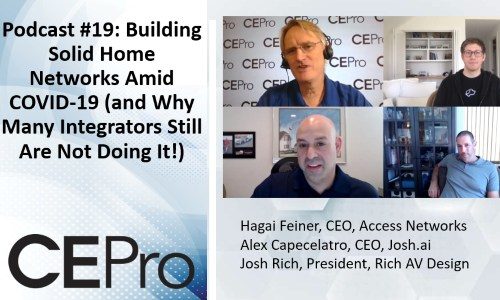 Next, Coello and the customer explore the home and property, using MetaGeek products to identify areas plagued by signal interference, weak connections, and complete dropouts. At these problem areas, the integrator plugs in an Access Networks WAP and measures again, revealing how the addition of quality access point delivers top speed and signal reception.

“The focus throughout is on educating and demonstrating, not selling, and engaging the customer in the design of the network,” Coello says.

Another eye-opener provided by Coello’s in-home demo is how well the wireless controller manages the flow of Wi-Fi traffic, he adds.

The Access Networks controller intelligently links a smartphone, for example, to the nearest WAP to maintain the strongest connection possible. Minus the supervision of a wireless controller, it’s up to the connected device, such as a smartphone, to decide with which access point to connect, often choosing the weakest link, Coello explains.

“By the end of the demonstration, clients understand why we call Access Network solutions a ‘plug-it-and-forget-it’ network,’” he says.

“Once it’s been professionally configured and installed, the system takes care of itself, ensuring complete Wi-Fi coverage that’s fast, reliable, and stable – and that’s something most homeowners are willing to spend extra to have.”