Hisense and TCL (left to right) detailed improvements among the upcoming lineup of respective Laser TV and 8K TVs shown at CES 2021.

And as with all display manufacturers, there is no shortage of 8K and large-screen media room and home theater options. Here’s some of what big global brands Hisense and TCL shared at Digital CES 2021.

“Hisense continues to maintain the No. 1 TV position in the Chinese market and we are extremely competitive globally. Our ongoing innovation allowed us to expand this success even during a challenging year,” says Fisher Yu, vice president of Hisense Group, pointing to the company’s social TV platform, Dual Cell TV and new TriChroma Laser TV offerings.

To continue its home entertainment wares in 2021, Hisense will implement its 8K 120Hz chip and mini LED 4K 120 Hz technology into its lineup, featuring the ULED and Laser TV series, Yu says, “to provide the user an impressive audiovisual experience.” He also points to the company’s U7 processor and high refresh rate for adding to the experience, especially with sports per Hisense’s role as an official sponsor of Euro 2020 soccer.

Beyond ULED, the company will bolster its portfolio of Laser TVs in 2021, with screen sizes ranging from 75 to 100 inches that incorporate the TriChroma laser technology.

The new TriChroma Laser TVs mark the latest iteration of the product, explains Dr. Xianrong Liu, chief scientist of Hisense Laser TV, who recalls bringing the first-generation Laser TV to CES back in 2015. He cited industry statistics on the growth of Hisense’s Laser TV in 2020, noting a 288% rise in overseas sales in 2020 from 17 countries including the U.S., and added that 75-, 80- and 88-inch models sold particularly well among the group.

“It shows us that in the past five years Laser TV has gone from a category in the niche market to mass market. In the meantime, the possibility of Laser TV display is being accelerated more than ever before,” Liu says, noting new 4K laser TV and projection offerings from major market players Samsung, LG and Sony. 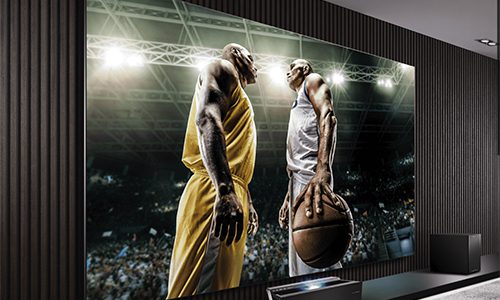 Liu elaborated on the evolution of the laser light source and the size of the displays since Hisense launched its 100-inch model in 2014, mentioning the move from laser phosphor to dual-color laser and now RGB while the size has gone from 75 to 100 to now even 300 inches for resimercial applications.

He adds the 430 nits brightness exceeds that of regular TVs by 20% at the pixel level, and the incorporated 100-inch screen has an enhanced wide viewing angle but with greater eye comfort level so people can sit closer for more immersion.

Liu notes the latest technology achieves a 128% improvement on the original RGB color gamut, and can reach 107% coverage of BT.2020 color space and 151% of the DCI-P3 film color standard.

“Hisense will continue to depend on the function of the large screen as the center of the smart home,” Yu adds.

Toward that end, he mentions Hisense’s vision of the home screen ecosystem that marries core technologies of displays, artificial intelligence of things and cloud services to address “the variety of everyday life, no matter where you are at any given time.”

The ecosystem or “eco-screen” products, particularly vital as the pandemic carries on, enables users to enjoy entertainment, home fitness, work-from-home, online learning and other lifestyle activities whether solo or interacting socially with others via screens.

Meanwhile, TCL is another major display manufacturer that’s been gaining momentum in recent years and also shared its latest big-screen (or bigger-screen, we should say) news at Digital CES 2021.

“Last year was a unique one for TCL but through it all, the team never lost sight of its goal to become America’s preferred consumer electronics brand and maintain its status – the No. 2 selling brand of television in the United States,” says Chris Larson, senior vice president, TCL. In 2020, buying group Nationwide Marketing Group began distributing TCL in the U.S.

“Not only did consumer needs propel us toward that achievement as people looked to their TV for entertainment more than ever, but large screens were in demand and picture performance became even more important. As a result, technology like mini-LED and QLED [quantum dot] made so much more sense as we approached CES.”

The company continues to make strides to elevate its 4K Roku TVs and 8K quality as well as make 8K more accessible to consumers as shown at CES 2021.

In addition to bringing mini-LED backlight to its 6-Series TCL Roku TV models last year, TCL notes that all of this year’s 6-Series Roku TVs will have 8K resolution, aided by its AiPQ Engine upscaling.

Among the 2021 TV lineup rollout set for later this year, the company noted its 4-Series Roku TV 85-inch model of the new XL Collection for starters will launch later this quarter at $1,599.