CE Pro asked a few of EH Media’s Millennial staff members to take part in a blind listening test to see if they could tell the difference between CDs and vinyl.
Robert Archer 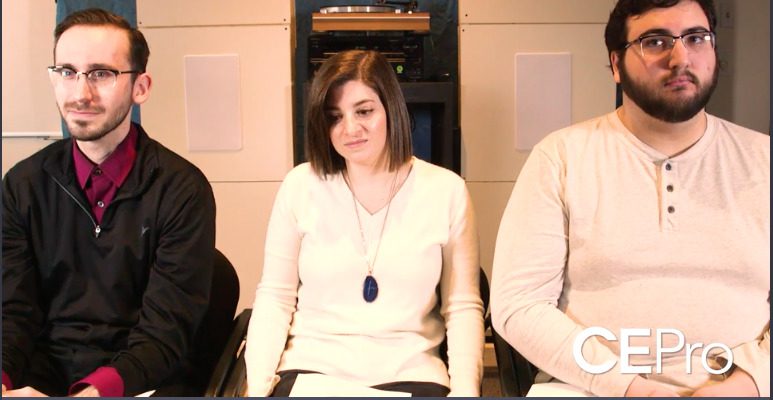 When it comes to physical media, it appears Millennials are receptive to more than just streaming audio.

Growing up with a wealth of entertainment choices, Millennials are unlike previous generations—Baby Boomers and Generation X—because they aren’t limited by technology.  Looking to gauge these consumers’ opinions on home audio, CE Pro conducted a Millennial Blind Music Challenge to find out whether they could tell the differences between the CD and vinyl formats, and their general thoughts on where the formats fit in today’s streaming-centric world.

It seems that almost overnight, Millennials have become a highly coveted demographic to corporate America as the marketing world transitions from the buying power of Baby Boomers to the potential of this young group of consumers.

The home audio market has been slow to embrace Millennials, lagging behind other consumer product categories.

In this blind challenge video, CE Pro asked EH Media staff members Andrew Nichols, web editor, CE Pro, Adam Forziati, web editor, Commercial Integrator, and Jessie Steinberg, marketing manager, RoboBusiness, Robotics Business Review and Robotics & AI Summit, if they could tell the difference between CDs and vinyl, and if it is worth integrators’ time and effort to offer these formats to the Millennial generation when installing new audio systems.

Outside of a vintage Thorens TD-160 turntable restored by Vinyl Nirvana, we used a setup that is representative of any system a professional integrator may offer their clients. Our system included an Onkyo A/V receiver, Skywalker A/V Saga loudspeakers, and a Toshiba disc player.

Going into the comparisons, all three of our Millennial staff members were expecting to hear some differences between the formats.

“I don’t think my peers have technically given up on the idea of downloads, after all Spotify still has a download option,”
— Adam Forziati, Commercial Integrator

Following the questions on their expectations, we asked their opinions on whether physical media formats such as vinyl and CDs still have a place in today’s world of music consumption.

Summarizing their responses, all three were adamant that Millennials haven’t given up on purchasing music.

“I don’t think my peers have technically given up on the idea of downloads, after all Spotify still has a download option,” points out Forziati.

“I’d say that I definitely stream music a lot more than anything else, but I do still buy CDs and vinyl—when available—for the bands I want to support,” says Nichols.

“I mostly stream music, but I do download albums when they are not available on a streaming service. Occasionally, if the album isn’t even available through download I will purchase a CD or record,” states Steinberg.

Providing an explanation on why physical media sales have dipped in greater detail, Steinberg emphasizes that the reasons aren’t easily defined, but they do make sense from a financial perspective.

“I’d say that I definitely stream music a lot more than anything else, but I do still buy CDs and vinyl—when available—for the bands I want to support,”
— Andrew Nichols, CE Pro

“I think there are a lot of reasons, but the fact that we all carry around a computer in our pockets has a lot to do with it,” she adds.

“Carrying around a Walkman with three to four CDs with 12 to 15 songs [per disc] on them or maxing out your phone memory with downloaded songs isn’t necessary anymore, especially when you can stream millions of songs for $9.99 per month virtually taking up no space on your phone.”

Perhaps with all of the hype that vinyl has received over the past several years, the group went into this comparison thinking vinyl would sound warmer and “more musical.”

Surprisingly each listener was stunned at how good CD sounded in direct comparison to vinyl.

Unlike older, hardcore audiophiles who are wed to preconceived ideas regardless of circumstances, the three were ultimately just as open to buying CDs after this small listening comparison.

It’s important to note that all three still find vinyl an exciting format, and have no plans to give up on the technology.

Here are the results of the challenge. If you would like to put on a pair of headphones and see if you can tell the difference between the vinyl and CD recordings to “beat the Millennials,” go for it.

Next in the CE Pro Millennial Blind Music Challenge will be CDs vs. streaming media.