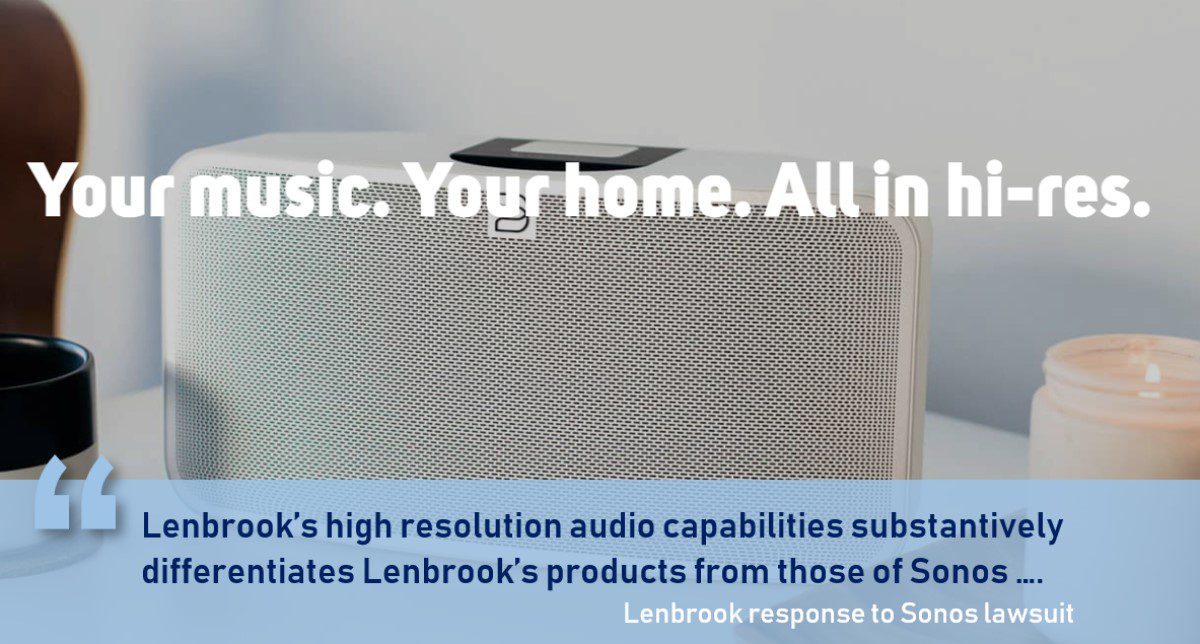 The patent infringement complaint was filed in the United States District Court for the Central District of California on June 20, 2019, and names both Lenbrook entities as defendants.

Lenbrook says in a statement that it respects the valid intellectual property rights of others, and in fact has entered into many patent licenses over its 40-year history. It goes on to say the Bluesound brand and technology platform was developed and funded by Lenbrook, a private Canada-based company.

“This proprietary development has relied on 40 years of internal or contracted Lenbrook know-how in the areas of amplification, acoustics, and connected audio allowing Lenbrook to develop products delivering high-resolution audio files and streaming music throughout residences and commercial establishments.

“Lenbrook’s high-resolution audio capabilities substantively differentiates Lenbrook’s products from those of Sonos and many other of Sonos’ actual direct competitors. Lenbrook believes it is generally recognized by the industry as the first legacy audio company to deliver such a complete and differentiated solution to the audiophile marketplace,” says the company.

“Lenbrook believes it is generally recognized by the industry as the first legacy audio company to deliver such a complete and differentiated solution to the audiophile marketplace.”
— Lenbrook statement

Lenbrook acknowledges it is aware of the prior patent infringement dispute between Sonos and its competitor Denon, which ended with a negotiated settlement.

Furthermore, Lenbrook says it is also aware that in November 2018, Sonos sent letters to multiple audio companies, including Lenbrook, providing notice that Sonos believes that they all infringe certain Sonos patents.

“In accordance with Lenbrook’s standard business practice, while beginning its own investigation of Sonos’ patent concerns, Lenbrook, as a sign of goodwill and respect, did inquire whether Sonos had developed a standard licensing program and terms. Lenbrook disagrees with the recent statement from a Sonos 'spokesperson' characterizing the substance of the parties’ licensing discussions,” says the Pickering, Ontario-based company.

“In fact, Lenbrook has been a Canadian distributor (its original platform business) for over 40 years representing scores of respected 'non-Lenbrook owned' brands across the audio, custom installation, professional communications and wireless communication industries,” it says.

As a final point of clarification, Lenbrook agrees that it was indeed the distributor for Sonos in Canada briefly for 10 months from approximately July 2007 to May 2008.

Lenbrook notes that the company continues to be a trusted distribution partner to the brands it represents in Canada.

“Lenbrook considers Sonos’ suggestion that its 10-month Canadian distributorship of Sonos products somehow allowed or led Lenbrook to copy Sonos’ designs or ideas to be meritless and damaging to the reputation and value of the Lenbrook enterprise.

“As a respected premium player in the specialized consumer and commercial audio industry, Lenbrook takes its reputation for integrity, partnerships and goodwill seriously and looks forward to a prompt resolution of Sonos’ claims,” the company says.

Lenbrook America Corp. is the U.S. distributor of NAD, PSB and Bluesound products.

Both Lenbrook and Sonos are exhibiting at CEDIA Expo 2019.