A new product category, a new name, new tagline … this year’s CEDIA Expo Virtual Experience has much more in store from custom integrators who are well familiar with iRoom as an iPad docking station provider. Yes, there will be beautiful new docks as well.

Foremost is that the company now goes by iRoom iO, and with that they will also see verbiage on the website that speaks to “intelligence. on.” as part of that new messaging.

Attendees to the CEDIA Expo Virtual Experience, taking place September 15-17 (register at cediaexpovirtual.com), will be able to learn about the new intelligence and associated new products when they enter the iRoom iO virtual booth (iroomio.cediaexpovirtual.com).

“That goes along with a brand new category that we’re releasing here at CEDIA called iO Smart Control,” says Chris Lehnan, general manager for the North American division of the Austria-based company.

“Basically, iO Smart Control is a line of relays. It’s light and shade control where you install our relay behind any switch and it turns that switch into a smart switch.”

Lehnan says the big benefit for the CEDIA channel integrators is with retrofits or scenarios where a wire might be missing, they can control that light or shade wirelessly from a control system – Crestron, Control4, Savant, etc.

“It’ll be a great problem solver for when guys kind of run into a corner, as they do from time to time,” Lehnan notes.

He adds that this is a big year for product introductions for the company, which as mentioned has made its name in the iPad docks category and has new models that Lehnan enthuses are “super cool, there’s nothing out there that’s like them.”

Expanding its variety of solutions, the new offerings include the iTop OnWall, which the company is touting as the industry’s first universal wall docking station with Store-Charge-Lock and Control for all iPad models and sizes.

It even comes in 10 color combinations featuring five aluminum base colors and two glass colors, and provides an adjustable, sliding charging connector. 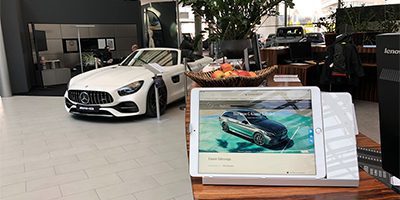 “It’s got motorization involved, so if somebody’s really looking for that ‘wow factor’ you’ll be able to get that from iRoom iO,” Lehnan says.

Plus, the new docking options offer security for iPads along with delivering a contactless, voice-controllable solution for users.