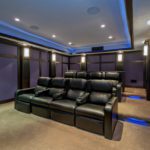 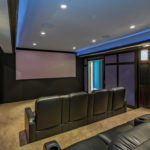 There’s a lot you can do with 3,500 square feet: massive rec room, headquarters for a business endeavor, apartment for a college graduate now living at home. When given the opportunity to use that spacious real estate for a home theater, Kalamazoo, Mich.-based Automation Design + Entertainment counted it as a blessing.

This was not a bare, blank-slate kind of a project, however. Occupying the area was a home gym—with a hallway running through the middle of it. Challenge accepted.

To modify the space into something more fitting for a theater, in the hallway he installed custom barn doors that slide open to reveal a Craftsman-style home theater complemented with a bar and lounge area.

“Starting out this project, we knew that the layout of the space was going to be a challenge,” says Peter Cook, president of Automation Design + Entertainment.

With that hurdle cleared, Cook was able to concentrate on controls for new home theater. A dealer for Elan, Cook recommended the company’s g1 System Controller.

The Elan app on smartphones and tablets, as well as several strategically placed Elan touchpanels, would give the owners control over the home theater gear, Lutron lighting system, plus surveillance cameras, security system, A/V and lighting in other areas of the home.

An Elan S1616A Multi-Zone Audio Matrix/Amplifier was also added to allow for the tailoring of sound to match each listening zone’s unique acoustic environment.

A variety of lighting elements—all controlled by Lutron—complement each environment, too.

In the theater are rise step lights, proscenium sconces, backlighting for the 2.35:1 screen that’s fed by a 4K projector, two zones of can lighting for the upper and lower levels, walkway lighting, plus cove lighting that casts black-light onto the theater’s signature feature—a custom-painted mural of the constellations.

Lastly, Cook ensured that the equipment of the theater would stay in mint condition by protecting it from outages and power surges with a Furman F1500 UPS battery backup.

Take a look at the slideshow to see more photos of the new home theater!