Terms like OLED and QLED can be daunting to prospective customers, so learning how best to explain these technologies could help make the technologies easier to grasp. : Image provided by Stereo & Video Center

Every integrator is probably frequently asked, “Who makes the best TV?” And with each of the big display manufacturers using its own brand of acronym-heavy buzzwords, there is no simple answer to give clients that won’t confuse them. Indeed, one of the most common questions asked by customers is for an explanation of the differences between Sony and LG’s OLED (organic light emitting diode) TVs and Samsung’s QLED (quantum dot light emitting diode) TVs.

Matt Pecharich, technology sales consultant for Stereo & Video Center in Tyler, Texas, faces this inquiry “daily,” he says. To help make sense of it for clients, he created a blog discussing the differences between OLED vs. QLED in terms of panel technology, picture quality, affordability and consumer friendliness.

“We carry what we consider to be the top three TV brands on the market: Sony, Samsung, and LG. Not only do they incorporate ahead-of-the-curve technology, but we also consider them to be the longest lasting and reliable,” says Pecharich.

To help elevate the entire industry, Pecharich shared his blog with CE Pro. Here are some of the key excerpts, which might help other integrators answer these common questions from their clients.

Both Sony and LG make televisions with OLED technology while Samsung has decided to stand alone with its line of QLED options. The biggest difference between the two types is the panel that is creating the picture… it’s not just the ‘Q’ and ‘O.’

Normal LED/LCD televisions use backlight passed through the liquid crystal and color filter to produce a picture, but you might only have one row of LEDs along the top of the TV or a row on each side. Both the QLED and OLED have a different solution.

Samsung QLED panels incorporate what is called “quantum dot” technology. A quantum dot is an incredibly small molecule that glows when supplied with energy and the size of the dot determines what color. For instance, a smaller dot might glow blue, where a slightly larger dot might glow red or green (and different shades thereof).

QLEDs are made up of multiple layers stacked on top of each other with the liquid crystal near the top. This is why QLEDs are thicker than an OLED.

The two most important layers of a QLED panel consist of the backlighting. One layer is the quantum dots themselves, the other is a panel of blue LEDs behind the dots.

The blue LEDs behind the QDs provide not only all of the blues you’d see on the screen, but also the energy needed for the quantum dots to turn their respective shades of red/green giving us the three colors the human eye needs for a picture. This also makes the QLED panel incredibly efficient.

All you’re doing is sending power to a layer of blue LEDs which in turn power the quantum dots creating a much richer picture with deeper, truer colors than normal LED backlit televisions.

However, this setup is also fundamentally inefficient as well.

The layers of blue LEDs and quantum dots work together to create “white” light which is then sent through a polarized layer, the liquid crystal, then a color filter. The color filter is what creates the picture you see, but it does so by BLOCKING light to let a specific color through. So, there’s a lot of wasted energy since roughly 66 percent of the light is blocked to let in a blue (instead of red or green) for example.

Figuring out a way around this color filter will be the next step for QLEDs. This would double the efficiency. They aren’t quite there yet, but projects are in the works to replace the color filter with the layer of quantum dots. We’d expect this will be several (if not more) years away from being perfected for commercial distribution though.

OLED: An OLED panel is substantially different than a QLED panel, and to fully understand the difference between OLED and a normal LED (light-emitting diode) TV, you have to know how each one works.

LEDs use semiconductors to pass electrons through a junction. Each time an electron passes through the junction it releases surplus energy, resulting in a flash of light. Those flashes of light are what we see as an LED glowing.

An OLED is the same in concept, except instead of using the semiconductors, it uses two layers of organic molecules to produce the electrons. The panel is made up of six different layers (from front to back):

An easy way to think about how these layers work is the 8th-grade science class experiment where you connect a positive wire to an anode and a negative wire to a negative cathode, and then run a current through it. The OLED does the same thing, which makes the emissive (organic) layers negatively charged and the conductive layer positively charged.

The reaction between the two creates brief bursts of energy in the form of a light particle, or photon, which produces a continuous light.

When the TV adds a color filter to the layers … presto… it turns continuous light into colored light.

Because this process occurs so efficiently on a molecular level using the organic material layers, there is basically an individual LED for every pixel on the panel.

Both OLED and QLED have an overwhelming edge on picture quality against normal LED/LCD TVs. But which one is better, and why?

It all comes down to processing power as the key difference maker.

QLED: Take Samsung’s QLED line as an example. Samsung has the Q6FN, Q7FN, Q8FN, and the Q9FN. All of which will have an exceptionally better picture than the Samsung 8000 series (the series right below the Q’s). The difference in picture quality, and of course price, comes down to the processing power in each Q model coupled with the quantum dots.

The faster the TV can process the incoming video data the smoother the motion flow.

Also, colors are rich and incredibly accurate on a QLED. What makes the biggest difference though is the dark, near black colors have no bleed, which occurs from normal LED TV backlighting. It is impossible to get a true black in a normal LED/LCD TV because it’s backlit. This is why plasma TVs were so popular for having the best picture. Plasmas were able to get a true black without sacrificing much picture quality. 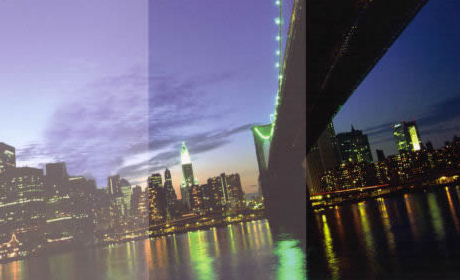 Have you ever been watching a dark scene of a show or movie and it’s either too dark to see anything, or the scene ends up looking like the slice on the far left of the picture above? A black scene ends up being a really dark gray because the TV has to have a balance of dimming and brightening the LEDs. If it tried to turn off the LEDs completely to produce a real black you wouldn’t be able to make out details (technical term is Black Rush).

That doesn’t happen with a QLED. It delivers great dark scenes with exceptional quality and detail. Movement is smooth and 4K movies or content look fantastic even on a Q6FN. Skin tones are accurate, and there’s very little (if any) jitter.

OLED: When describing QLED picture quality, you will often hear the words “near black” colors in dark scenes and content. But you won’t read the word “near” when describing the OLED picture.

Because the OLED panel uses layers of organic material to generate the light, it is like a solid sheet of approximately 8.3 million LEDs (one for every pixel on the screen). There is no backlight bleed, because when the scene needs to be black… it turns off the pixel entirely.

One great test to use for TVs to determine the quality reproduction of colors and dark scenes is to select a demo scene from a 4K movie that includes flickering fire as the only light source for the camera shot. You can typically find this in films that are set in historical times before electricity.

Visualization of the differences between OLED and LCD panel technology.

It’s impressive to watch this type of content in 4K on either a Sony or LG OLED television.

Not only is the level of detail incredible, but the smoothness of the fire flickering over surfaces is superb. The reflection, refraction, and the obvious hard line between light and dark makes scenes amazingly lifelike… all because of the panel’s ability to completely turn off the pixels to create 100 percent black.

Accurate reproduction of skin tones and other aspects is also perfect. Colors besides black are deep, rich, and best of all, bright. There are some that say an OLED isn’t suited for a room with a large amount of natural or artificial light. I have yet to see any problems regarding this issue. The panel has plenty of settings to choose from and handles well-lit rooms like a champ.

I have also yet to experience any type of jitter on an OLED, unless a wireless stream starts lagging or buffering. Motion flow is seamless. There’s much to be said for the upscaling ability as well.

It’s one thing to develop to best TV money can buy, but what if no one can afford it?

Thankfully the prices on both are in the range relative to what we’ve always expected high-end TVs to be.

“Our goal here at Stereo and Video Center is to help our customers make an educated decision on their purchases regarding home theater, automation, and entertainment technology. The industry moves quickly and we have to keep pace in order to ensure our service stays the best in East Texas,” says Pecharich.

Take a look at the slideshow to view some of the latest in both OLED and QLED technology.