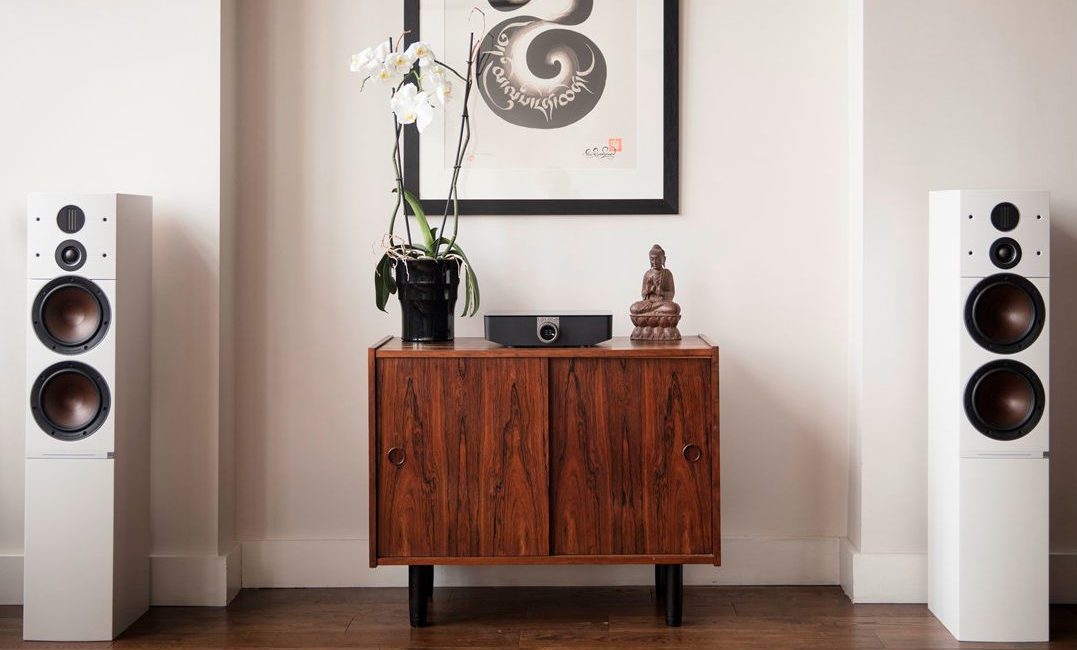 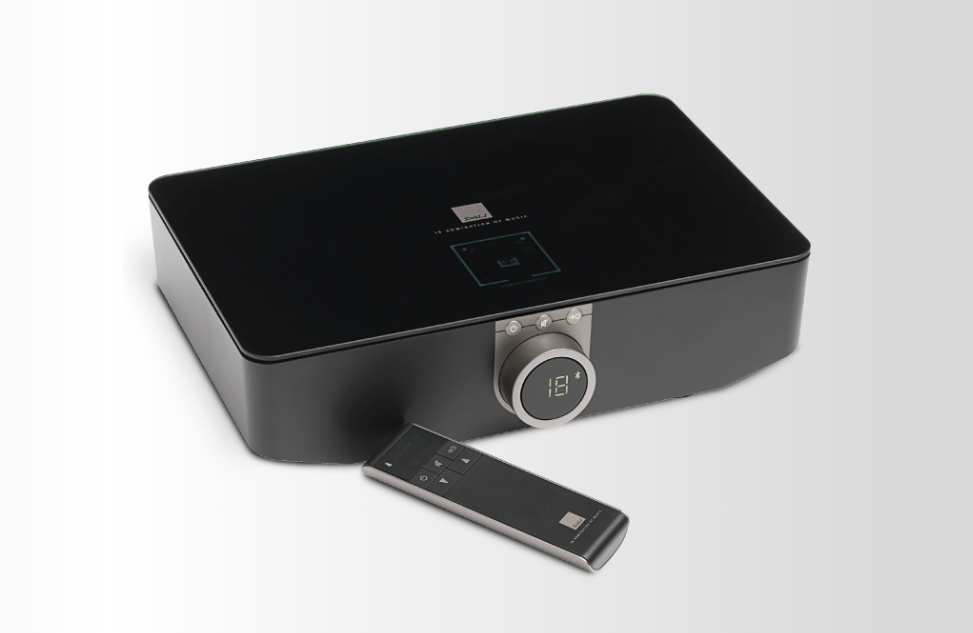 Towards the end of this past summer (2018), Lenbrook, the U.S. distributor for the European audio company DALI (Danish Audiophile Loudspeaker Industries), announced the DALI CALLISTO line of wireless, active speaker systems.

Lenbrook sent me the larger of the two system options, the Model 6C, which features a pair of tower speakers with a central hub unit.

The system comes in a choice of white or black finishes.

Moving on to the system’s central hub: The unit is roughly the size of a source component such as a CD player or cable set-top box and its appearance is dominated by a centrally located volume knob that includes an LCD screen to help communicate volume levels.

The central hub’s rear panel features an analog RCA output, a subwoofer output and a choice of RCA analog, auxiliary in analog, coax digital, and a pair of optical inputs.

In addition, BlueOS supports multiroom operability with BluOS-based products from brands like Bluesound and NAD.

Setup is pretty simple, and not much different than pairing a set of Bluetooth headphones to an iPhone or some other smart device.

Just like a set of wireless headphones, there are buttons on the back of the speakers that you press. Through this process, the system recognizes each speaker and through these steps, the speakers will configure as the left and right speakers within the system.

The system’s whole-house capabilities configure through the BluOS app alongside the central hub. This process is similar to most app-based audio systems that ask integrators to follow a series of setup prompts for include network options and streaming services.

In my case, I use TuneIn, which doesn’t require users to sign in, as well as Amazon Music, TIDAL and Pandora. I also have an Apple Music account, but while support is coming soon, at the time of this review BluOS doesn’t support the service.

Before I get into fine detail concerning my listening experience, I’ll admit that maybe I’ve turned into the thing I hate the most: An audiophile curmudgeon. Hearing demos of the system in the CE Pro office and at CEDIA Expo didn’t knock me out, but once I got the system at home it was a different story.

Thankfully the CALLISTO system helped me escape audiophile curmudgeonville and showed me how much fun and entertainment is possible from a well-engineered wireless audio solution.

I started my listening by connecting my iPhone 8 via Bluetooth to the system so I could listen to some of my favorite Apple-based content like some instrumental music from Pete Thorn and select tracks from Lisa Loeb, Extreme, Steely Dan and AC/DC. I found the system revealing, with the production on Pete Thorn’s new record coming across dense and a bit compressed, while Loeb and AC/DC sounded more open and dynamic through the DALI gear.

I also thought the speakers imaged well with Bluetooth.

The DALI CALLISTO Model 6C system delivers the same level of performance and functionality I've come to expect and appreciate in similar systems for thousands of dollars less, making it a much better value.

Hearing “You Shook Me all Night Long“ from AC/DC, I could distinctly hear Malcolm and Angus Young’s guitar placement within the mix, along with the vocals, drums, and bass.

Detail wasn’t sacrificed either. On P!nk’s “Who Knew,” I thought the system resolved the production techniques found on this great pop song that includes the addition of keyboards to the second verse underneath the guitar, bass and vocal tracks, and later the strain in her voice as she pushed her vocals for emphasis on the line, “until we meet again.”

Later I heard the same levels of resolution on the famous shuffle pattern Jeff Pocaro plays at the beginning of Toto’s “Rosanna” with a slight bit of reverb added to the drums. Steve Lukather’s clean guitar part that comes in just before the verse is panned to the right and it also contains a touch of reverb that stood out while listening through the system.

Moving into the world of BluOS, I listened to sports talk radio from a local Boston radio station and CD-quality level content from TIDAL. The higher quality TIDAL content really allowed the system to showcase its capabilities.

The TIDAL-based MQA encoded content definitely sounded fuller and simply better than my Bluetooth streaming sessions did. Listening to a mix of bands using TIDAL, most of which weren’t audiophile recordings, did nothing to detract from the fun the CALLISTO system produced.

One thing I’ll point out is that my listening room employs a live end/dead end design with acoustical design on one side and no design on the other side. Unlike most reviews, I placed the speakers in the untreated end because, as a lifestyle system, I thought this would best represent the listening environment of most homes.

Underscoring how good the DALI system sounds—even with the system located in the “live end” of my room—I thought the CALLISTO Model 6C system sounded smooth, articulate and dynamic.

Roughly a year ago I reviewed a NAD Masters M32 integrated amplifier that included built-in BluOS and I really liked it. Used in tandem with my system components that included Monitor Audio speakers, I thought the combination brought high-performance audio into a new era.

The DALI CALLISTO Model 6C system delivers the same level of performance and functionality I experienced through the Masters M32, as well as similar systems for thousands of dollars less, making it a much better value.

Now that we've established the performance of the system, let's quickly look at the environmental impact of the system. Integrators should be aware of one minor point: Since it is an active speaker system, the speakers will have to be located near power outlets. But, other than having a network robust enough to reliably support streaming media, there should be no apprehension in offering this solution.

Stylistically, I wish the speakers’ industrial design had a more contemporary appearance that reflected the state-of-the-art technologies the system incorporates, but I really have no concerns about this system: It is a killer package and highly recommended as a solution that represents today and tomorrow’s audio consumers’ needs.