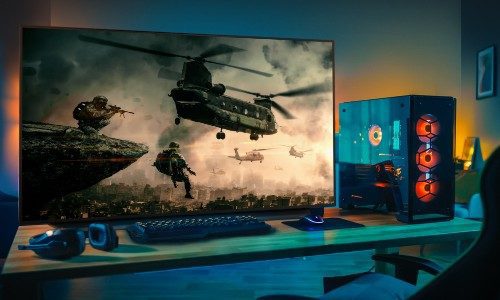 LG Electronics is adding to its OLED TV lineup a new 48-inch screen size with the introduction of the 4K Ultra HD OLED 48CX. The set complements LG’s lineup that includes 55-, 65-, 77- and 88-inch models.

The company’s OLED technology, boasting perfect blacks and infinite contrast thanks to self-illuminating pixels, is at the heart of the new display. The set reproduces vivid and sharp 4K picture quality due to significantly higher pixel density of 8 million pixels (3840 x 2160) on a more compact screen, density comparable with that of a 96-inch 8K TV, according to the company.

The 48CX builds on the legacy established by LG’s OLED TVs, particularly for gamers. As with other OLEDs in the lineup, it incorporates NVIDIA G-SYNC for graphics rendering and increases players’ sense of immersion by adapting the TV’s refresh rate to the frame rate of the connected hardware.

Additionally, the new 48-inch model and all other 2020 LG OLED TVs feature HDR Gaming Interest Group’s (HGiG) HDR gaming profile. This means that gamers can enjoy high quality graphics when playing HDR games via consoles on their LG TVs, according to the company.

“LG is again pushing the innovation envelope by bringing the ultimate picture to a TV screen size that is much more approachable,” says Park Hyoung-sei, president of LG Home Entertainment Company.

“Now even more consumers will be able to experience the superior performance of LG OLED TVs, considered to be the most advanced gaming TV on the market today.”

While no pricing was announced, sales of the LG OLED 48CX will kick off in key European and Asian markets in June, with North America and other target countries to follow. U.S. availability is anticipated to begin in late June.