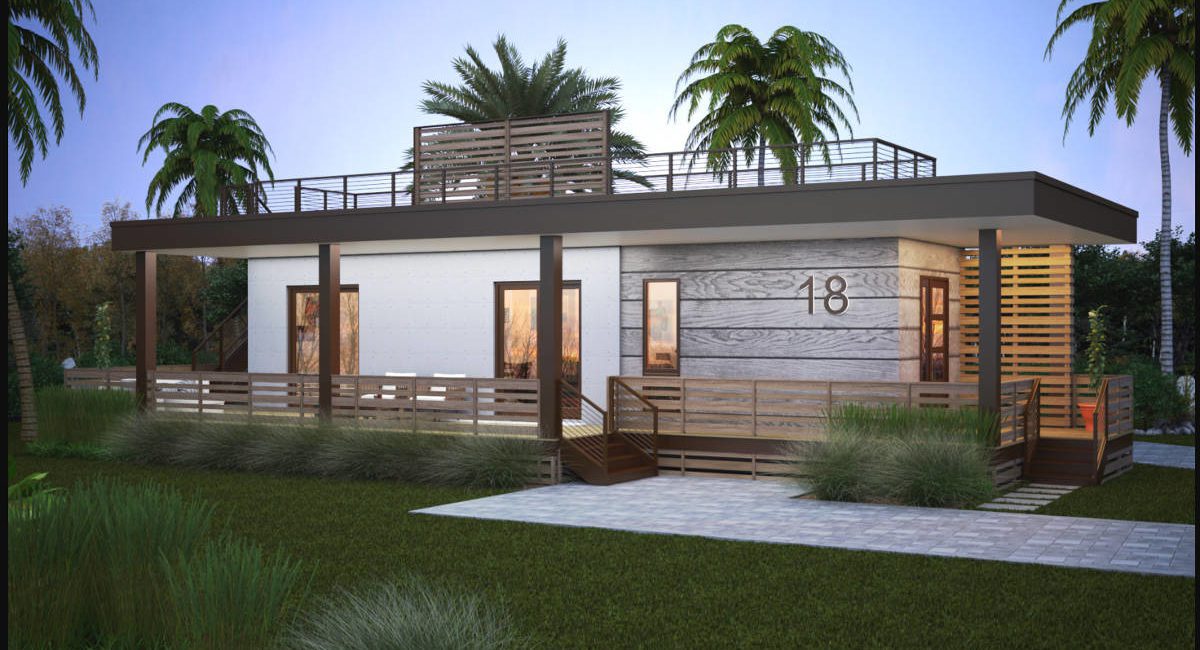 The company, which debuted two years ago at CEDIA Expo and made quite a splash at CEDIA Expo 2018 last fall,  recently announced a partnership with Pearl Homes, a leading developer of green US Green Building Council (USGBC) LEED Platinum residences, on a new community in Florida called ‘Hunters Point—Pearl Homes Community and Marina.’

The 148-home community in Cortez, Florida unites solar, energy storage and home automation resulting in a ‘Net-Zero-Plus and Climate-Positive’ community. A second phase of the community will have 720 apartments.

The network of net-zero homes is the first community implemented by the Sonnen-Pearl Homes partnership.

Each home will be equipped with rooftop solar panels (generating 7.2MW of power), a Sonnen energy storage (storing 9MWh of capacity), a smart thermostat and an EV charger  – all controlled by Sonnen’s energy automation and artificial intelligence (AI) software platform.

But what about control? Hunter’s Point has officially named Google Home as the control platform for the master-planned development.

While the Google brand name is great for marketing purposes, the real nuts and bolts behind the smart homes will be a combination of Crestron and Control4 deployed by two separate integrators: Cinegration out of Denver and PanTech Design from Grapevine, Texas.

“Right now, there is only a very small group of integrators who can do energy automation.”
— Blake Richetta, Sonnen

Sonnen has strategically brought in both these integration companies to develop the “blueprint” for designing a smart home using Sonnen. (PanTech for Crestron; Cinegration for Control4).

Those specifications can then be used by Sonnen to help guide builders and developers, as well as future integrators, on how to seamlessly deploy Sonnen energy systems.

Blake Richetta, senior vice president and head of Sonnen’s U.S. operations, admits if there was an integration firm that was Sonnen-certified ready in the state of Florida, that dealer would likely be involved in the project.

“Right now, there is only a very small group of integrators who can do energy automation. The integrator needs to be able to tie in not just A/V equipment, but solar, electric vehicle charging stations, appliances, and other different types of drivers that are not typically deployed by integrators.

“Both Pantech and Cinegration have perfected the drivers and Pearl Homes could not be more thrilled,” says Richetta.

Because the Pearl Homes units are smaller, just 750 square feet, it means more money can be spent on eco-forward technology because the developer will spend less on traditional construction materials because the homes are smaller.

What Is an 'Energy Automation Contractor'?

Both Pantech Design and Cinegration are examples of what Richetta calls a new breed of “energy automation contractors.”

Sonnen has a multi-prong approach to the energy market by pulling together various trades including:

“We are trying to bring all these partners together to create a new trade that we call the energy automation integrator,” says Richetta.

He notes that custom integrators are critical to the success of this new energy channel.

“The CEDIA integrator has access to this affluent clientele who really care about the green home of the future,” he notes.

Sonnen is force-feeding all these contractors together with builders and developers.

“In general, builders are not super excited to work with home automation integrators. It has not been a great marriage.”
— Blake Richetta, Sonnen

“We can bring integrators into these production homebuilder projects. In general, builders are not super excited to work with home automation integrators. It has not been a great marriage because of price and because most production builders do not understand value.

“But the energy industry flips that perception around because the business model is very different from an integrator walking into a homebuilder and trying to sell him a bunch of equipment. We make it so the homebuilder and developer can actually monetize these intelligent energy assets,” says Richetta.

The energy assets that Sonnen sees becoming integral to an energy automation contractor are:

“These things all come together in a new energy automation ecosystem that is not the same as a typical integrator’s footprint in a high-end home. It is much more focused on energy,” explains Richetta.

For builders, they can create a “virtual power plants” that aggregate hundreds or even thousands of homes so the energy consumption is controlled by the utility in what is called load shaping.

That virtual power plant becomes an asset for the developer and homeowner from which they can earn recurring revenue.

Many Builders 'Don't Even Know an Integrator'

“Many of these eco-forward production builders love that Sonnen is bringing in integrators to the project. Many of them don’t even know an integrator,” Richetta points out.

Pearl Homes agrees with that conclusion.

“For years, energy experts have sought an answer to the solar conundrum: how to generate and store enough solar for our homes,” says Marshall Gobuty, president of Sarasota, Fla.-based Pearl Homes.

“Sonnen’s technology in combination with our LEED Platinum home design has changed the equation for the ability to truly optimize smart homes using solar plus storage to the point where we are capable of building sustainable communities that share solar and decarbonize the region, one Pearl Home at a time.”

Read Next: Smart-Home Pros (No One Else) Can Own Emerging ‘Energy Automation’ Field—CEDIA Tech Talk

“We are thrilled to partner with Pearl Homes, the unparalleled leader in building LEED Platinum homes in the U.S., as we upend the traditional homebuilding vision and replace it with one based on decarbonizing the grid and establishing a complete solution for green living that is affordable for a much broader market,” says Richetta.

“Together with our partners at Pearl Homes and Google Home, we are effectively demonstrating the intersection between renewable energy, home automation and homebuilding, establishing a blueprint for the affordable clean energy home of the future.”

The community is designed to decongest the wires of the local utility grid, providing load-shaping throughout the day to support intelligent demand management; establish smart configurable backup that provides resiliency and peace of mind for homeowners in the face of storms and other natural disasters.

The U.S. Green Building Council (USGBC) has recognized Pearl Homes as a visionary leader for the company’s focus on building disruptive innovation and creating a future model for LEED-certified, Net-Zero energy homes.

“’Pearl Homes’ vision of increasing access to sustainable homes is directly aligned with USGBC’s vision to achieve green buildings for all within a generation,” says Mahesh Ramanujam, president and CEO, USGBC.

“Pearl Homes uses a streamlined process to achieve the highest levels of sustainability and occupant health. With the addition of Sonnen's intelligent clean energy management technology, the development of this community brings the potential for energy-positive living to the mainstream. Pearl Homes and Sonnen understand the value of LEED and have exemplified extraordinary leadership in reshaping their sector. This community will serve as a model for others to follow for decades to come.”