Invasion of the Giant MicroLEDs and the Pesky Question of LCR Speakers: CEDIA Tech Talk

During a CEDIA Expo 2018 Tech Talk, Samsung and Harman discuss video walls, including 'The Wall' and other MicroLEDs, in residential applications, plus challenges of LCR speaker placement.
Julie Jacobson 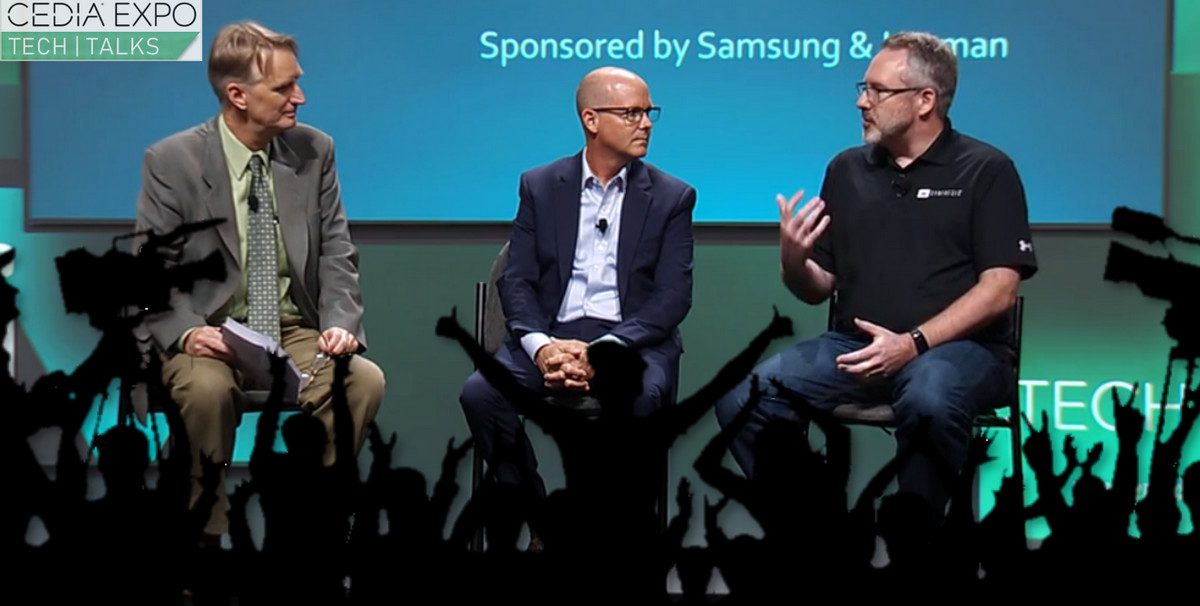 Invasion of the Giant MicroLEDs and the Pesky Question of LCR Speakers: CEDIA Tech Talk

Video projectors and screens, beware. There’s a new big-screen display in town that could someday replace annoying two-piece projection systems in the home. Imagine “video walls” built with modular LED panels that piece together with virtually no visible seams.

These “MicroLED” panels were the hit of CEDIA Expo 2018, pitched by several manufacturers including Samsung, whose 146-inch “The Wall” enthralled tens of thousands of CE pros for the first time at CES 2018 in January.

In video renderings, blacks are true blacks because the individual diodes turn off – “black is the absence of light” – when the image calls for it. With that, “you get much higher contrast, much better color, and it also lends itself very well to scalability,” Simpson said during a CEDIA Expo Tech Talk moderated by CE Pro’s Jason Knott.

It’s not just image quality and scalability that make MicroLEDs so appealing. It’s that they can go anywhere, including brighter spaces where traditional projection systems fall flat – seriously flat, like washed out. On the other hand, MicroLEDs pop in ambient light, even off-angle.

“There isn’t a projector in the market that can do that.”
— Samsung's Christopher Simpson on MicroLED lifespan

Calling the picture quality “exceptional” and “in a league of its own,” Simpson says, “You don’t get traditional degradation of image quality from left to right or top to bottom.”

Imagine, then, the places these displays can go in the luxury residential market – outside of the dedicated home theater and into the living room, say, for showcasing digital artwork on a large scale and in custom “canvas” sizes, Simpson explains: “Because it’s modular, it doesn’t have to fit the traditional [TV] form factor.”

Not every masterpiece, after all, comes in a 16:9 aspect ratio.

Even if the client does opt for Samsung’s standard 146-inch rectangle, the software can right-size a virtual frame for any “artwork,” and oglers will swear they’re viewing the real thing with a custom-made cardboard matte.

It’s the same stunning feat Samsung performs with The Frame, a gorgeous LCD that can blend right in with a wall full of framed family portraits or artsy prints. Simpson revealed during the CEDIA talk that Samsung would indeed incorporate some of The Frame’s digital magic into The Wall’s feature set.

Where do the Speakers Go? Center Channels, Anyone?

While big MicroLED arrays – Samsung’s or otherwise – can shine in applications outside a dedicated home theater, they can still rock the dedicated cinema room. The challenge is: Where do you put the speakers?

Joining Simpson on the Tech Talk stage was Jim Garrett, representing the Luxury Audio division of Harman International, a Samsung company. While he gushed about the art-and-architecture potential of The Wall, he acknowledged that many of the products would end up in traditional home theaters with cushy chairs and black-out shades and the finest surround-sound processors … and not a lot of places to put the front speakers.

“All the integrators are typically used to putting the speakers behind the screen – so a perforated or woven screen,” Garrett says. “Obviously now, with a solid surface, it kind of precludes you from doing that.”

The side channels, height channels and rear surrounds should be OK, but when it comes to L/C/R placement, says Garrett, “That’s the aspect of the system that really has to change.”

During the Tech Talk, Garrett runs through a number of options for L/C/Rs, including positioning them across the top of the screen. The problem there is that they get pretty close to the height channels.

Starting at 6:04 in the recorded presentation, Garrett illustrates some of the speaker-placement options for ultra-large displays, and explains pros and cons of each scenario. He continues at 12:00 with more discussion on how to match appropriate speakers to a big wall of video.

When Jason Knott asked about the price of Samsung’s The Wall, Simpson demurred – let’s face it, the product is expensive – but he did highlight some of the extra features that make MicroLEDs a good “value.”

For example, the LED diodes have a 100,000-hour lifespan to half-life.

“In a commercial application, where you’re running it 10 hours a day, you’re looking at 17 to 20 years before you even reach half your brightness,” says Simpson. “There isn’t a projector in the market that can do that. Even laser projectors don’t have that kind of longevity.”

Furthermore, MicroLEDs don’t consume lamps and filters like projectors do. Simpson suggests you might replace a projector and screen two or three times during the lifespan of a MicroLED display.

For some other interesting highlights of the Tech Talk, skip to 22:50, when Knott imagines the displays as something out of Fahrenheit 451, and Simpson points out some viable and interesting scenarios that would actually “make sense.”

The audience Q&A starts at 23:45 and includes some more technical discussions about Dolby Vision and HDR10, MicroLED and fine-pitch displays in commercial cinemas (15 of them), the “monumental task” of solving audio in these venues, scalability and pixel count, and this: What about glare?

The Wall is on display at Samsung’s East Coast experience center; a West Coast showroom will open in Irvine, Calif. in November. Simpson says Samsung will then look for demo locales between the coasts.

Check out all of the CEDIA Expo 2018 Tech Talks powered by CE Pro.