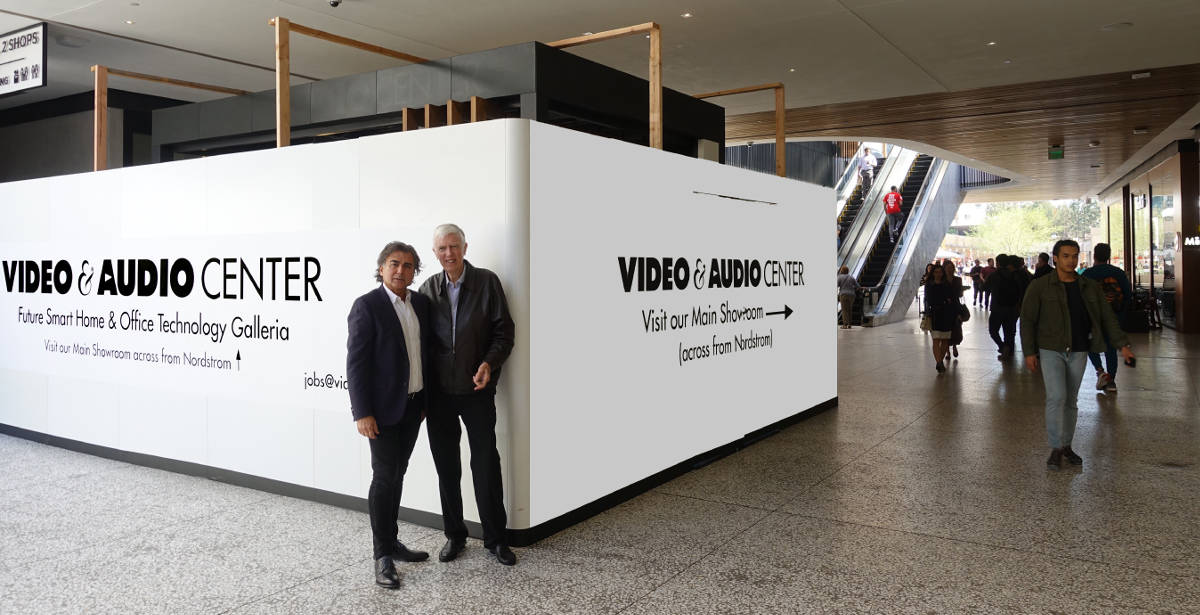 Joseph Akhtarzad (left) and Tom Campbell are poised to open Just One Touch/Video & Audio Center's new location in mid-November. The self-contained store is strategically situated so the mall's 2.5 million monthly visitors have to walk past it.

Joseph Akhtarzad of CE Pro 100 integration company Just One Touch/Video & Audio Center is certainly proving he is not afraid to take risks. The company is literally redefining what a “mall kiosk” location is by creating a new self-contained space in the tony Westfield Century City Mall … immediately across from the Apple Store.

Forget about those tiny kiosk spaces offering credit cards or selling pillows, Video & Audio Center’s new footprint will be gigantic in comparison and will be filled with robotics, connectivity solutions and introductions to its custom installation division, Just One Touch, which did more than $43 million in installation services in 2017. In all, the company did $96.3 million in overall sales and is No. 6 on the CE Pro 100.

The company, which already has a well-appointed storefront in the mall that highlights its custom installation capabilities, is adding to its current store location with its new space situated directly outside the mall’s busy Apple Store and across from Nordstrom’s.

“The new location is right in the center of the entrance to the mall… Everyone who enters the mall has to walk right past us.”
— Tom Campbell, Just One Touch/Video & Audio Center

“The mall has 2.5 million visitors per month,” says Tom Campbell, corporate director/chief technologist at Just One Touch/Video & Audio Center. “The new location is right in the center of the entrance to the mall… Everyone who enters the mall has to walk right past us.”

The new “kiosk” means Just One Touch/Video & Audio Center, a member of the Home Technology Specialists of America (HTSA), will be the only retailer in the affluent mall with two locations. The high-ceiling store is built with black granite and glass finishes and is due to open in mid-November.

Campbell would not speculate on which particular brands will be showcased in the new storefront, but said it would certainly include several control brands, in addition to the A/V brands he carries.

Akhtarzad is working with a team of architects to translate his vision for the space.