Report says Amazon is contemplating getting into the homeowners insurance business, a perfect complement to Ring Alarm, which just began shipping this week with wildly disruptive prices.

Amazon might be getting into the homeowners-insurance business – a perfect complement to its Ring Alarm and home-automation system, which just began shipping this week (at wildly disruptive prices), as well as the domestic robots the company is expected to deploy later this year.

Citing a “person familiar with the discussions,” The Information reports that Amazon has “contemplated” the offering, but there is “nothing that suggests Amazon has any concrete plans for insurance ….”

According to the report:

Amazon.com has contemplated offering home insurance as an offshoot of its development work on robots and other connected devices for the home, according to a person familiar with the discussions. The idea is that robots and other smart devices can be used to monitor for threats such as nothing that suggests Amazon has any concrete plans for insurance fires and burglaries, making it possible to offer cheaper premiums.

The insurance industry has played in the home-security and IoT space for decades, offering discounts for customers who have monitored alarm systems and other smart-home products and services.

The insurance industry’s interest in IoT has escalated quickly over the past couple of years. They see smart-home technology as a vehicle to 1) assess risk, 2) mitigate loss, 3) engage consumers and 4) generate new revenues.

At the same time, GAFAA (the second “A” for Alibaba) or “BigTech” has been eyeing the marketplace for all types of insurance. The 2018 World Insurance Report from Capgemini warns “incumbent insurers to enthusiastically prepare for challenges from digitally agile players” like Amazon:

BigTech firms have inherent advantages that make their entry into the insurance space possible with new tech-based disruptive models. … They have amassed rich personal and behavioral data of customers, and using their competencies in analytics and automation, these BigTech firms can reach their customers in a highly personalized manner. Often, they build up ecosystems that not only cater to a plethora of their customers’ needs but also help lock customers in for new services.

If that doesn’t describe Amazon, what does? Amazon has amassed huge amounts of personal data based on Amazon.com purchases, consumer behaviors gleaned from Alexa, and soon knowledge of security usage from customers of Ring Alarm, camera and video doorbell systems. (Amazon acquired Ring earlier this year, shortly after acquiring surveillance camera manufacturer Blink.)

Amazon has proved that it can hook customers onto new services once it gets them shopping on Amazon.com or using Alexa.

Related: Why Amazon will Probably Buy an Alarm Installation Co. like Vivint

Meanwhile, U.S. customers are warming up to the idea of buying insurance from BigTech. In just three years, willingness among U.S. consumers to buy insurance from a GAFAA giant has surged from 16.4% in 2015 to 32.6% in 2018, according to the World Insurance Report. In Europe, the willingness grew from 9.2% to 20.9% during that time. Worldwide, 29.5% of customers polled said they would consider buying at least one insurance product from a BigTech firm if such products were available.

Amazon Already in the Insurance Business

Is there a relationship between the types of books a household buys, or the music it plays … and the likelihood of a fire?

This wouldn’t be Amazon’s first insurance rodeo. The company recently entered the health insurance business with JPMorgan and Berkshire Hathaway.

In 2016, the product-warranty service Amazon Protect was launched in Europe with The Warranty Group’s London General Insurance Company.

The insurance goes beyond manufacturers’ warranties, covering things such as accident and theft – services not typically offered by mainstream warranty providers.

At checkout, customers are given the option to “add to basket” the coverage of their choice. Since its UK launch in 2016, Amazon Protect has expanded to several other European countries.

In the U.S., warranties are offered at checkout through traditional third-party providers such as Asurion and AllState’s Square Trade.

As with practically everything else it touches, Amazon has the potential to crush competitors in the home insurance business.

Competitors themselves would kill for the type of personal data that Amazon has been mining since it sold its very first book on Amazon.com. Now with Ring under its possession, Amazon could glean personal insights like no other provider can, except maybe Google.

Imagine the learnings Amazon could glean, given its massive customer base and breadth of offerings. Is there a relationship between the types of books a household buys, or the music it plays … and the likelihood of a fire? Are users of the Ring Neighborhood app less likely to have a break-in? Are chronic product-return abusers bad insurance risks? Are communities with a high concentration of alarm systems better risks because they’re secured or worse risks because the neighborhood is deemed unsafe?

Via Ring Alarm sensors: How do traffic patterns to/from/within a home relate to insurance risk? Via Alexa phone calls: Can you assess risk based on who the customers are calling?

One big problem with IoT-driven risk assessment today is that insurance companies and big-data aggregators like Verisk can’t control for all the variables to measure the relationship between IoT and risk.

How do you create a large enough control group?

That shouldn’t be a problem for Amazon, given everything it knows about any given household – purchasing preferences, demographics (age, race, religion), family makeup, comings and goings, and of course addresses and who the neighbors are.

It probably knows if you own products that are prone to theft or fire or some other damage. It certainly knows if you’re arming your security system. 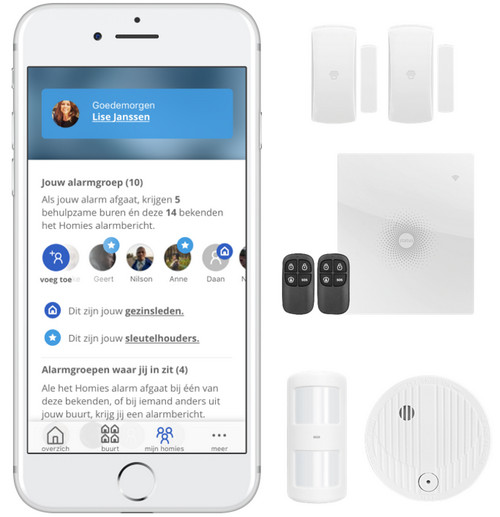 Reinsurance firm Achmea got its start in security much like Ring – providing Homies security systems and a neighborhood app free of charge to low-income communities.

In fact, insurance is probably the reason Amazon acquired Ring – not for any whiz-bang technology, and not for immediate profits, and not necessarily for the volume of customers, but for the concentration of customers.

It’s the same reason the Dutch reinsurance company Achmea launched the Homies alarm system in 2016. In fact, Homies did exactly what Ring did in the early days to seed the market – providing the security system free of charge to low-income communities.

Achmea noted this vision statement in a 2016 presentation:

An insurer can no longer afford to simply insure its customer’s risks and compensate them in case of a claim …  but must expand its field of interaction to risk prevention …  and more globally to daily proactive support for its customers during their entire life for all their daily challenges.

The Homies system, co-developed with Accenture, includes a community communications app much like Ring’s Neighborhood.

The big missing piece in all of this? The car. Amazon ought to get into automotive insurance and telematics so it can gather that data as well. A map service like Google’s would be the clincher, being able to track where the insured is going. Too many trips to the liquor store, ER or jailhouse might raise your premiums.

NEXT: Insurance and the Connected Home