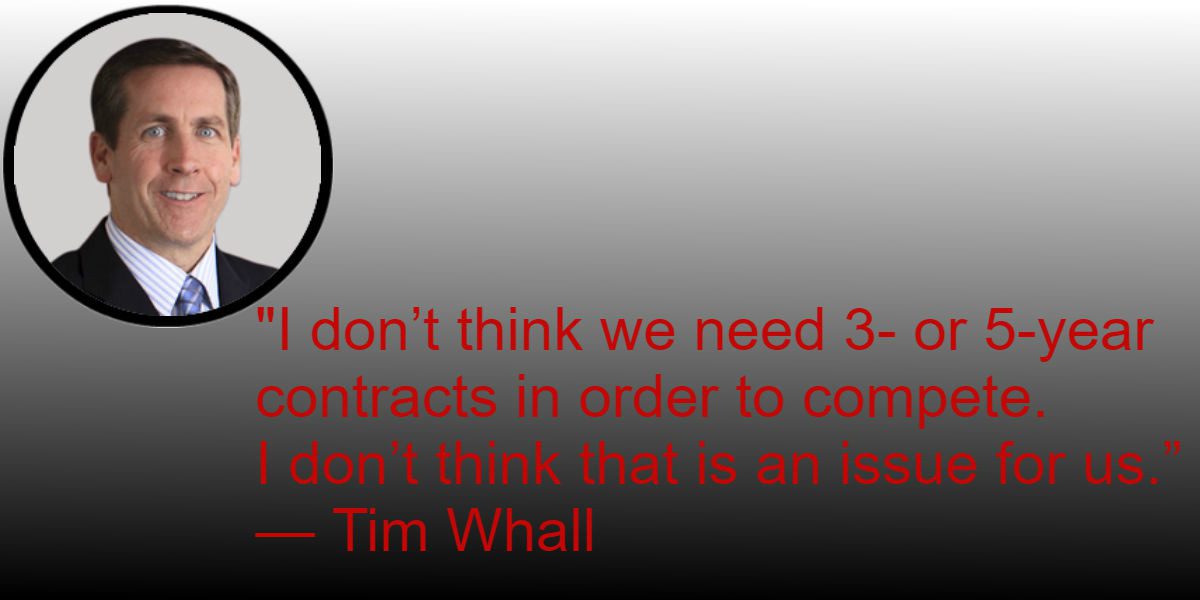 Whall believes integrators don't need long-term contracts in order to compete and instead can obtain financing from banks if they start charging more upfront.

Former ADT CEO Tim Whall has some sobering news for integrators engaged in the residential security sector: $10 per month, no-term alarm contracts sold over the Internet will be the norm going forward, and the trend will push down valuation multiples for integrators' exit strategies.

For an industry built on high-margin monitoring with long-term contracts that eventually lead to high company valuations, Whall’s assessment is more than a slap in the face… it’s darn right depressing.

Whall, who retired last year, made those predictions at the recent California Alarm Association (CAA) winter conference in San Francisco earlier this month during a sit-down Q&A presentation with Rodney Bosch, senior editor at Security Sales & Integration, a sister publication of CE Pro.

The discussion was wide-ranging but focused on the future of the smart home and where independent integration companies can carve out their niche when mega players like Amazon and Google are involved, along with a slew of startups pounding away on the consumer mindset that DIY security is better than professional installation.

These market-altering trends are forcing some security dealers to adopt new business models that account for the evolving dynamics of connected technologies and related services, including the prospect of adopting a DIY offering — or even a hybridized model — out of concern that competing DIY providers could cannibalize traditional buyers, Whall explained.

“The sales model has gone from in-home to more over the phone and over the Internet, with a minority of it now coming from those in-home sales,” he said.

Whall says that the new low-cost pricing models do more than just put pressure on integrators to lower their prices, but they also dramatically affect the long-term valuation of an alarm company.

“And I think that’s what the independents are thinking about; what do we do with our valuations going forward if monitoring is going to be $10? That is cutting into what we do.”

Whall told CAA attendees that the increase in lower cost pricing models from new entrants, including national marketers such as SimpliSafe, necessitates that security dealers be more transparent about their own pricing. That is because mass-market security integrators are actually subsidizing the cost of the equipment in the monthly monitoring fee, which is why some systems are actually free to consumers.

But consumers don’t really understand that, especially when they see DIY systems that instead charge an upfront equipment fee, then lower monitoring. That sort of clouds the overall picture for the consumer, Whall said.

“Even at $10 per month for monitoring, most [integrators] would probably say, ‘I can still probably do that deal.'”
— Tim Whall

“Monitoring sounds like it’s monitoring, but it rarely is. If it was just straight burg and fire monitoring in the home I think all of us would have to be pretty close in the range of what we would be willing to charge for that,” he said. “And there would always be some price leaders that might want to compress that a little bit.”

“Those are services. As an industry I don’t think we have done a great job explaining to the consumer how those services raise their rates up,” he continued. “I’ve been very critical about the websites at the companies I have been with over the years at just how bad they are and how difficult it is to find out anything.”

Whall emphasized it’s easy to explain the details of an offering when speaking directly to the consumer. But, since sales are increasingly being transacted online, especially among younger buyers and Millennials, integrators need to fine-tune their websites to support an e-commerce platform.

“As an industry we have work to do to be very transparent about what our services are and what we are charging for, because nobody is really charging a better price than us,” Whall said. “Even at $10 per month for monitoring, if all you are getting is monitoring, most people in this room would probably say, ‘I can still probably do that deal.' I can get close enough, and sell that we are better at it and we deserve $15 or $19.”

On the topic of contracts, Whall suggested independent dealers should be comfortable with the idea offering of a no-term contract. He pointed out, however, that “no term” certainly does not mean “no contract.” Integrators want to protect yourself with a signed contract that limits liability and expressly details what happens in the event of an issue.

“If I don’t have to finance the deal, having no terms I think we can all get right with that,” Whall said. “I can’t tell you how many deals I’ve shook hands on and said, ‘If you don’t like the service just call me and cancel. If we haven’t earned your business it’s OK to cancel.'”

Historically in the alarm industry, Whall explained, the number of contractual months has always been about how banks could lend on that or dealers would leverage the contract to say they have guaranteed revenue coming in based on the length of the contracts.

“I don’t think we need 3- or 5-year contracts in order to compete. I don’t think that is an issue for us.”
— Tim Whall

“But remember the offset to that is you are going to charge them upfront. Your business is going to look a whole lot healthier,” Whall said. “You are going to get money at the point of sale that you typically haven’t got because you subsidized that install and put it into the monthly fee.”

Whall believes integrators can still obtain financing from banks for customers at the $10/month level if they start charging more for the upfront equipment.

“I don’t need you to guarantee me 60 months of this because I didn’t finance you buying this. So it’s not you paying me. I don’t think we need 3- or 5-year contracts in order to compete. I don’t think that is an issue for us.”

Commercial Market Is a 'Little Safer'

Whall compared and contrasted current market conditions in general terms between the residential and commercial sectors. Whereas the resi space is being inundated with new entrants, big-box retailers, telcos and the like, the commercial has proven more difficult to infiltrate.

“Commercial feels a little safer right now. The years of expertise, the requirements, the regulations to get into the space, there is a bit of comfort in that,” Whall said. “I control my destiny and I’m not so worried about what the new entrants are going to do and if somebody [is] going to come in here and try and buy market share at my expense.”

Most of the recurring services in the integrated commercial space is centered around test and inspection, Whall said, but independent integrators are more and more understanding they can build that part of their portfolio as a means of increasing their valuation multiple.

“The other nice thing about the commercial space, I have for a long time compared it to the automobile industry,” he continued.