During the 2018 CEDIA Expo in September, the show welcomed two dozen interior designers looking to gain insights on the CEDIA channel and learn how they can implement more home tech into their designs.
Arlen Schweiger 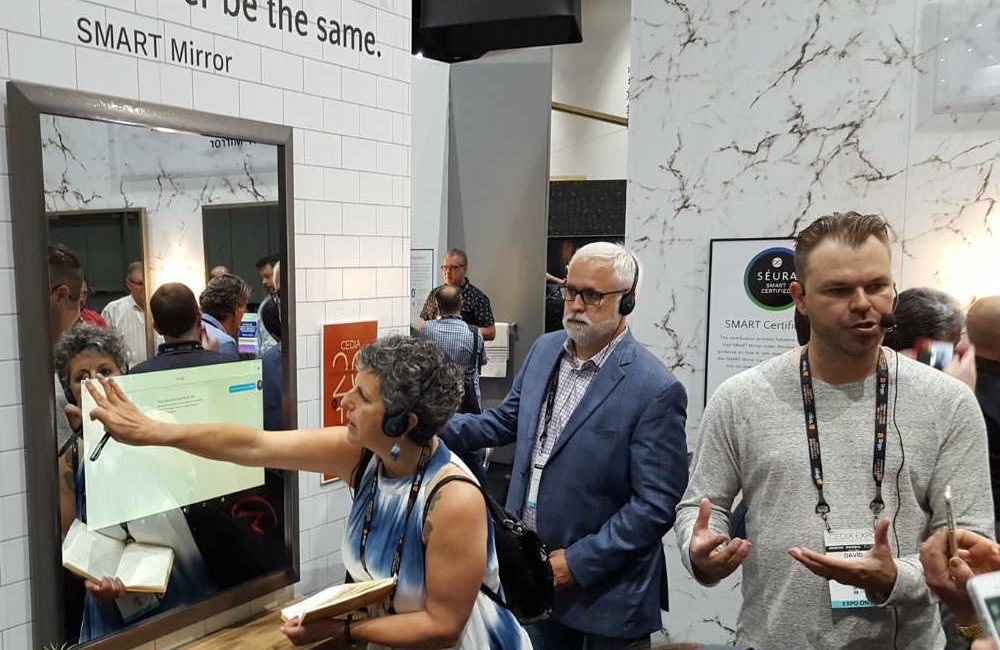 The Design Connection tour gave designers a look at cool tech like the Smart Mirror from Séura, voice commands by Josh, integrated lighting from Lutron and more.

While the show may be long over, the 2018 CEDIA Expo made strides towards better integrator and interior designer collaboration by inviting nearly two dozen designers to the show's first-ever Design Connection Tours.

“Where we struggle … let’s face it, [integrators are] geeks; they love the black boxes, they love talking about the specs, the ins, the outs and all that stuff, but they’re beginning to learn your language too so that together we can create these lifestyle experiences inside of the home,” noted Brad Hintze, senior director, product marketing, Control4. “And we can leverage technology to live better, live smarter.”

Hintze told the designers that one of the factors behind Control4’s Certified Showroom initiative, which launched with 150 of its 5,500 dealers earlier this year, was “for us to provide a destination for you to come and experience technology, and also a destination for your clients because we know the technology has to be experienced. Requirements for [the select integrators] to become a Certified Showroom is to present an elevated aesthetic — like the kinds of projects you would work on,” Hintze said.

As the group made their way through the various tour stops on day one, the reactions among the designers proved to be what the CEDIA community might expect — a healthy mix of curiosity, awe, and inspiration.

“My husband would be saying, ‘Who do I make the check out to?’ right now!”
— Robin Rigby Fisher, Designer

“Our goal is really to talk about bringing [technology] into projects, coordination and collaboration with the entire design team,” said VanWert. “I’m sure you’ve all heard lots of nightmares, ‘Oh no, not the A/V guy again,’ but it’s not as painful if you bring up technology early in a project.”

Slick products such as Séura’s Smart Mirror impressed the group, while integrated solutions such as a demo in the Lutron booth where a Josh.ai voice command (“What if I have a friend named Josh, will it get confused?”) successfully dimmed lights to 30 percent, brought shades down 50 percent and started playing the Beatles’ White Album simultaneously.

“My husband would be saying, ‘Who do I make the check out to?’ right now,” enthused Portland, Ore.-based designer Robin Rigby Fisher.

“I really didn’t understand how integration goes. I’ve been overly impressed,” Fisher said after the tour. “A majority of my clientele are older Baby Boomers, and they’re like, ‘Why do I need this?’ I haven’t done a lot with integration because I don’t know enough about it to tell them what they need; now I think I know more what to talk about with them.”

Related: Which Smart Home Technologies Do Interior Designers Want to Use the Most?

Meanwhile, the Design Connection Tours weren’t the only place to spot interior designers at the show. LG’s booth highlighted two living room vignettes — one representing a suburban space and the other an urban room, both centered around the company’s OLED TVs and home automation partnerships — in which it enlisted the aid of leading integrators and renowned interior designers.

Robert Zohn and Scarsdale, N.Y.-based Value Electronics teamed with Kate Rumson of The Real Houses of Instagram on a Control4-anchored suburban room, while David Raines and Osbee Industries worked with Sarah Sherman Samuel to outfit a Crestron-controlled urban room.

“We decided to go all-in and really show how custom installation featuring LG products comes together and after last year’s CEDIA we decided we needed to do a little better job on the room design … so we figured we’d bring in some experts,” noted Tim Alessi, senior director, product marketing at LG.