Harman Luxury Audio brands will be very busy showing ISE 2020 attendees the many new audio products at its booth.

Featuring its Arcam, JBL, JBL Synthesis and Revel brands, Harman Luxury Audio is unveiling 27 new-to-international market products for audiophiles, home theater fans and integrators at ISE 2020 in its stand 1-M50. Plus, as part of its offerings, JBL’s new Conceal Series showcases a collaboration with Stealth Acoustics.

“The range of introductions we’re showing here is a powerful statement of intent,” says Jim Garrett, senior director, Harman Luxury Audio. “It’s also a strong indicator of the depth of innovation that Harman has invested into each of our luxury audio brands.”

It follows up on the similarly huge showing Harman provided for U.S. custom integrators at last fall’s CEDIA Expo in Denver.

“There is most definitely strength in numbers on Stand 1-M50 here at ISE 2020. We’re extremely pleased to be able to equip our partners with the best-sounding, best-connected, best-looking audio offerings across our brands and I am confident this lineup will resonate strongly with clients in the audiophile and home theater communities across the globe.”

Arcam Amps Up Its Offerings 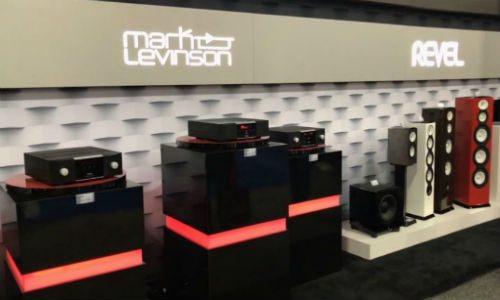 PA720, PA240, and PA410 – The two-channel Class G PA240 is rated at 2 x 220W into 8 ohms and can be bridged to operate as a single channel of 1,100W into 4 ohms. The seven-channel Class G PA720 generates 100W of power into all channels at 8 ohms. Both include XLR inputs, plus Ethernet and RS232 control. The Class AB PA410 offers four channels of power, rated at 50W each, plus a toroidal-based power supply, an acoustically damped chassis, and paralleled transistor output stages.

Solo Uno – The streaming audio amp combines Google Cast and Apple AirPlay2 connectivity with built-in 50W x 2 Class D amplifier. The versatile product can to directly drive a pair of loudspeakers as a standalone system, or as part of system connected with other Arcam products using the same Google and Apple connectivity.

With no visible external components or grilles, Conceal Series speakers install as easily as a drywall patch and have a smooth FidelityGlass surface that can be painted or finished to match the wallboard, JBL explains.

Myriad options for the SDR-35 and SDP-55 include Ethernet or Wi-Fi connectivity with Google Chromecast built-in and Apple AirPlay 2, playback from network media servers, or a USB flash drive, smart TV audio via eArc, Bluetooth with aptX HD, and DAB/FM for terrestrial radio. The MusicLife app allows control of streaming content from iOS and Android devices.

Revel has additions to its Performa Beryllium loudspeakers with two floorstanding models and a new center channel, expanding the series to five offerings.

F328Be – The flagship speaker uses a newly developed 1-inch Beryllium tweeter with a vented pole piece and a much larger ferrite motor structure that, according to the company, delivers improved dynamics and increased overall output capability. A 5.25-inch Deep Ceramic Composite (DCC) cone midrange driver and triple 8-inch DCC cone woofers round out the array.