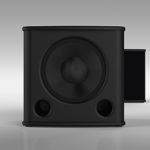 The current darling of the home audio scene is unquestionably object-based surround sound.

Led by Dolby and its trend setting Atmos format, object-based surround sound or immersive audio has made its way from commercial theaters, to the home, and even the concert stages of some of the world’s biggest bands.

Unlike a commercial theater or live front of house (FOH) environment however, achieving optimum object-based surround sound performance in a home setting may be a tougher technical hurdle than the obstacles commercial sound engineers face.

The Realities of Human Hearing and the Perception of Bass

“It is often said that low frequencies are omnidirectional or not localized by the human ear. Though this is true with steady state signals like sine waves and even pink noise, it is difficult to tell where the sound is coming from,” states Hales.

“That idea however no longer holds with audio system content, whether its music or movie soundtracks. With real-world signals we can identify and derive benefit from perceived directionality in the lower frequencies.

Hales points out that it is rare for pure tone reproduction.

“Nearly all sounds—man made and those which occur in nature—are comprised of a complex, harmonic series of tones, and concussive sounds carry an impact or visceral sensation as well,” says Hales.

“These overtones and concussive forces are what give us cues as to the location and direction of low frequency sounds.”

Breaking down the experience in more layman terms, Hales comments that anyone who has stood in a room with someone playing a drum kit or double bass can relate to the idea that someone can close their eyes and locate where the sound is coming from.

Elaborating on the real-world experience of hearing a live drum kit or double bass, Hales says having those overtones and harmonics are key to helping someone to localize where those low frequencies emanate. He says if the fundamental or root note were isolated than it would be more difficult to localize those same low frequencies.

Outside of a recording studio where the tools exist to manipulate frequencies through filters and equalization, it is not realistic to eliminate the harmonic structure of a note.

“In reality the fundamental tone and all the harmonics and concussive cues emanate from the physical instrument together,” he emphasizes.

“It is for this reason that in order to achieve the most realistic audio playback, all the frequencies present in a sound emanate from the same point in space—the loudspeaker—as much as possible. This is why distributed subwoofers are important.”

What is Distributed Bass?

Hales says that in order to make the listening experience of immersive audio more cohesive, a speaker placement technique that he recommends is distributed bass. The concept of distributed bass is to place subwoofers near companion speakers as closely as possible to minimize low frequency localization.

“So this phrase distributed bass management, I’ve kind of coined that. I don’t know if it’s been used before or if people know what I am referring to when I say that,” he admits

“When I use the term distributed bass management I am referring to subwoofers placed in the room that receive low-frequency signals from the immersive audio full range speakers uniquely or distinctly, rather than bass managing all the low-frequency energy to all subwoofers.”

Taking a different approach in his explanation, Hales says that ideally a subwoofer is placed close to the immersive speakers and the bass management low frequencies from those speakers is directed to the nearby subwoofer and not all of the subwoofers in the room.

“For example, if you had a subwoofer on the left wall in the rear near the listening area, you would locally bass manage the immersive speakers that are close to that subwoofer to that particular sub and the same thing on the other side of the room,” he explains.

“You would localize those immersive speakers to their local subwoofer.”

Distributed Bass is a Universal Concept

More Related Content: Pro Audio Technology Explains the Science Behind the Use of Multiple Subwoofers

“Distributed bass management is indeed scalable. The simplest system would be one with a single subwoofer on the wall with the screen, and an additional subwoofer located in the surround area,” states Hales.

“Smaller surround speakers can be bass managed to the surround-area subwoofer, while screen and forward surround speakers—front Atmos ceiling and the wide channels—can be managed to the front subwoofer. Our recommended configuration for most systems is four subwoofers—two on the screen wall positioned left and right at 25 percent of the room width off the side walls, and two surround subwoofers positioned on the left and right of the room in the surround area. Then the room can be divided into four quadrants with the local loudspeaker low-frequency energy steered to the woofer residing to the same quadrant.”

Hales says any loudspeaker in the system should cover the entire frequency range it is engineered to reproduce. Frequencies outside of that safe operating range, and more specifically low frequencies, should then be directed to a subwoofer.

“The capability to do just that—mix [the] low-frequency energy on any channel at any crossover frequency desired into subwoofer channels is a feature available in our brand new Theory brand of amplified loudspeaker controllers,” he points out.

Taking these concepts into the field Hales recommends to integrators to look at his new brand’s Theory Audio’s ALC-1809B and ALC-1508B Amplified Loudspeaker Controllers.

“The BassDirector bass management mixer in the new Theory ALC-1809B and ALC1508B Amplified Loudspeaker Controllers makes blending the low frequencies from many different channels easy. All that is required is a real-time analyzer [RTA], a tool most home theater calibrators use regularly,” he says.

Providing an example of how the new Theory products work, he adds the following scenario illustrates how integrators can implement distributed bass techniques.

“First the LFE signal is connected to a subwoofer input on the ALC-1809B. The ALC-1809B has balanced audio inputs with looping outputs so it is easy to get the LFE signal into several ALC-1809B’s without the need for y-adapters. Then, using the built-in signal sources or the LFE test tone supplied by the surround processor, the installer can set the LFE levels between the main subwoofers and surround subwoofers. We always recommend directing the most LFE energy to large main screen wall subwoofers so that the main impact comes from the front where you are seeing the image. We usually set the surround subwoofer LFE levels to about 6dB below that of the main subwoofers at the reference listening position. Distributing some of the LFE channel energy to the surround subwoofers helps to smooth out the low-frequency energy in the room,” he states.

Summing up this setup scenario Hales boasts the audio playback is more realistic than systems that use traditional bass management methods.

“Once this process is complete, the surround subwoofer will play LFE and all locally ‘steered’ bass energy in exactly the correct proportions to the channels with which it is mixed,” he comments.

“When this technique is used, the sense of surround ‘envelopment’ is remarkably ‘real’ and believable. There is a sense of ‘continuity’ to the surround sound field that noticeably enhances realism, and it is quite extraordinary.”