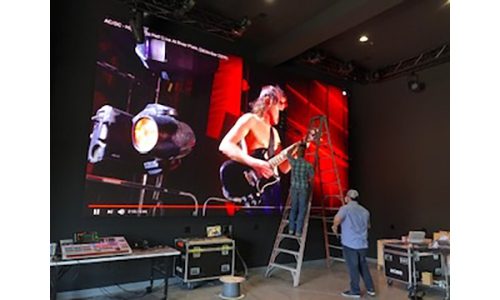 Bringing a client’s new business dream to life can be an exercise in futility, especially when the whole world goes into quarantine mid-project. However, with a consultative design approach, flexible thinking, and trusted partners, an experienced integrator can stay in command of the process, and create an end result that exceeds their client’s wildest imaginings.

The owners of Diversion Amusements in Las Vegas Nevada came to Steve Gomes and Jentry Nix of Adobe Communications Electronics with a warehouse space in the shadow of the new Raiders’ stadium and one such dream: Create a tailgating experience that was so epic, football fans would rather be there than at the game.

Founded by Gome’s father over 40 years ago, Adobe Communications has been providing a full range of low-voltage telecommunications design and integration services to the Las Vegas community for generations. The company’s offerings run the gamut from residential entertainment systems and CCTV systems for Vegas’ cannabis industry, to running underground fiber for the city itself. Founded before the dawn of the Internet, Adobe Communications now creates network infrastructure for higher education and military clients in addition to its range of residential solutions.

“There was a year and a half of ideation prior to execution. We spent a lot of time walking the space with the owner, figuring out which ideas were wishes, and which were needs.”

When a facility is competing with one of the NFL’s newest stadiums, the AV needs can be intense. Adobe Communications’s mandate was to create an immersive experience, supported by a premium system: Sweeping, large-scale video; audio that would let customers feel the roar of the crowd, and motorized lighting effects synced to the video stream to celebrate every score. Adobe Communications also had a lot of ground to cover—a massive warehouse space to transition to a central event space and office spaces to convert to a VR lounge, a pinball museum, and green rooms for visiting talent.

As the design came together, COVID hit, and the system’s goals changed. There were no massive tailgate parties in the Fall of 2020. To succeed, Diversion Amusements had to become more than a football tailgating venue. With the help of Gomes, Nix, and the team at Adobe communications, the space was reimagined as a flexible venue that could host parties, concerts, and corporate events in addition to game-day celebrations. When hockey playoffs arrived alongside the vaccine in 2021, the venue also returned to its roots as a tailgate destination. All of these new-use cases brought in new requirements for the Adobe Communications team.

As Diversion Amusements opened its doors to private events, guests needed to be able to send their own content to the 16 X 16 video wall. Some of the venue’s 45 smaller direct-view displays were mounted on a lower level so that guests could bring in gaming systems to view their game below and the big game on the upper screens. Diversion Amusements also extended AV to their outdoor patio, allowing for socially distanced, open-air gatherings.

Adobe Communications chose Vanco’s EVO-IP as the video distribution backbone of this complex system. The EVO-IP HDMI over IP system allows AV signal distribution and device control for hundreds of devices over a local area network. Using an EVO-IP video Matrix and EVO-IP receivers, Adobe Communications was able to create a system that can transform Diversion Amusements into whatever kind of space it needs to be—game day hub, corporate event center, party venue, or eSports arena.

The end result more than meets Diversion Amusements expectations. “I love how versatile this space is,” comments Nix.

“I was initiated as a football tailgating venue, but it’s so much more than that now. You can feel the sound, and the video wall is quite impressive. You truly do end up immersed. The technology is the anchor of the facility.”

Nix adds the system works because the equipment it chose for the job is reliable and easy to install.

“We needed products we could trust, and that the manufacturer would support. We have great, local support with the EVO-IP Product line,” emphasizes Nix.

“They were supportive throughout the process, walking us through any questions and resolving issues quickly.”