Gilmore's Sound Advice was asked to provide music in a low-profile installation for this renovated barn that became a home office and yoga studio. (All photography: John Frattasi) 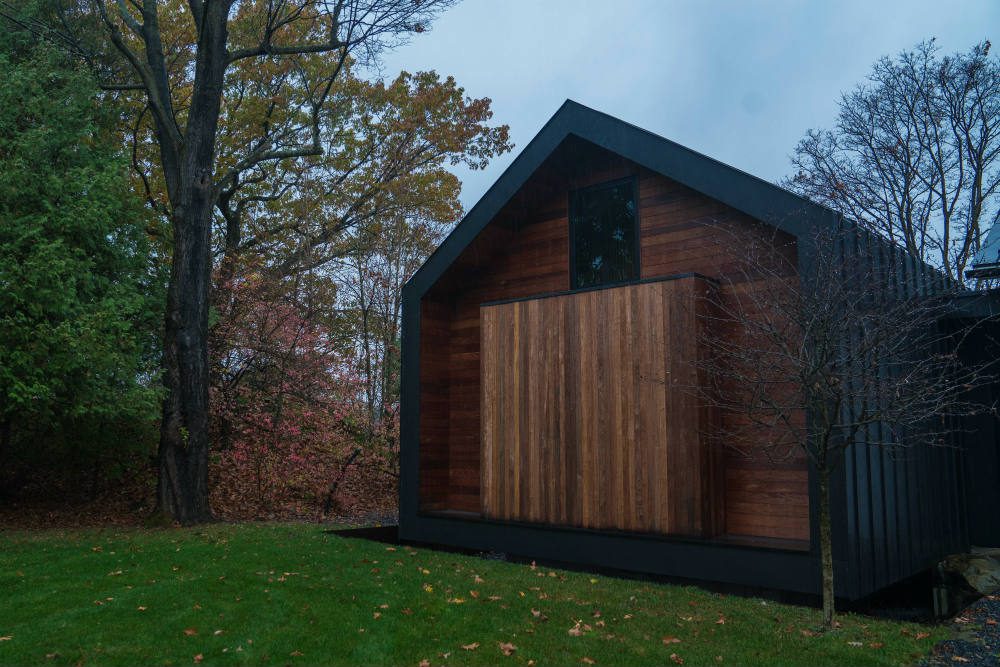 A customer called upon Gilmore’s Sound Advice, based in New York City, to visit a property on the banks of the Hudson River where he was planning an old barn conversion that would create a home office and yoga studio.

The property is a two-hour drive from Manhattan, and the finance executive client had a minimalist but elegant vision for the space, which was on a working farm where llamas are bred and raised.

Key to the minimalist environment, the client sought a high-performance music playback system but one that would be hidden from view. Primarily, he wanted to be able to hear his favorite music and podcasts from Tidal and other streaming services.

Integration firm principal Ed Gilmore worked on designing a system comprising three main zones of entertainment in the renovated barn – the yoga room, the office and a sitting area; plus music is available in the steam room.

Two pairs of Small Aperture speakers were used in the office, two pairs in the yoga studio and a single pair in the sitting room, while a subwoofer was installed in each zone.

In terms of makeup, the 63SA-7HO is a full-range, 3-way design with a 0.75-inch aluminum dome tweeter, 2-inch aluminum midrange driver and 6.5-inch aluminum woofer, concentrically mounted within an aircraft-grade aluminum enclosure, as James describes. 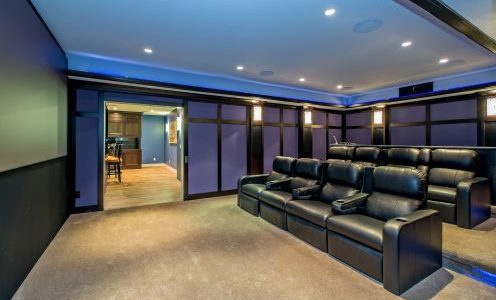 The company says the point source mid/high module delivers excellent off-axis response and generates bass down to 38Hz, concealed by a 3-inch square or round Microperf grille.

To augment the bass response and improve the audio quality, the Gilmore team took it a step further and integrated the 101SA-6 subs behind the wallboards. They offer all-aluminum bandpass enclosures housing a 10-inch woofer behind a compact 4-inch grille.

Gilmore’s placed the James M1000 amplifiers driving the subwoofers in a rack within the dedicated, air-cooled equipment space tucked next to the yoga studio and hidden. The rack also houses networking hardware, streaming music servers and multichannel amps for the barn’s audio system.

While James is known for its custom-matching abilities and services for grilles, Gilmore’s enlisted the renovation’s onsite woodworker in this case to overcome the chief aesthetic challenge.

Throughout the barn’s interior, fruitwood composite of cherry and pear was used, and the woodworker managed to carefully perforate the boards in the right places to enable sound to flow through from a barely visible opening.

“James Loudspeaker has been such a vital partner to Gilmore’s Sound Advice, providing unique and often custom solutions that deliver amazing sound where other solutions simply won’t do,” Gilmore says.

“Initially, this client was skeptical about our ability to deliver great sound invisibly, and we have exceeded his expectations to the point where he wants us to upgrade the entertainment system in his city apartment. We were able to integrate truly high-performance audio into a quiet, serene space and really please the customer as a result.”

The Planar screen isn’t part of the entertainment system but a standalone unit, though Gilmore’s accounted for the possibility of connecting it later on in the prewire.

Meanwhile, they had to trudge in the equipment rack and big Planar TV along less-than-ideal conditions, because the driveway hadn’t been poured yet, Gilmore says.

“We carried that gear through a meadow and across soggy turf, until a farm worker rescued us with his pickup truck, in order to reach the barn,” Gilmore recalls. “It wasn’t a typical load-in scenario for crates over 300 pounds.”