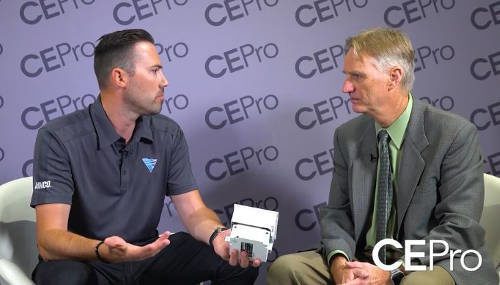 “It’s really important to have new product all the time because this market will constantly change," says Mark Corbin, president of Vanco International.

Mark Corbin, president of Vanco International, must be channeling Steve Jobs these days. The company has been riding a wave of new product innovations in disparate product categories, ranging from voice control to A/V-over-IP to loudspeakers.

So what are the origins for ideas that manufacturers use to develop new products?

Steve Jobs once famously said, “People don't know what they want until you show it to them.”

Jobs’ approach at Apple was to identify the tasks that people do consistently and make those tasks possible in a simple way.

As Jobs noted, “Our job is to figure out what they're going to want before they do. I think Henry Ford once said, ‘If I'd asked customers what they wanted, they would have told me, “A faster horse!”’”

“Where do we go? A lot of the direction comes from our end users giving us feedback, or running into situations in the field with our various products.”

According to Corbin, Vanco has an engineering team that communicates with its dealers and distributors consistently asking:

“We ask those sorts of questions a lot. The feedback we get gives us the information we need to work with our engineering team to design new products. For example, voice activation is really big right now,” he says.

“The feedback we get gives us the information we need to work with our engineering team to design new products.”
— Mark Corbin, Vanco

“The market has more voice activation products than ever. So we then ask: What do integrators want to make it easier to deploy voice control systems?  What will make their voice activation systems work better?”

He adds, “It’s really important to have new product all the time because this market will constantly change.”

After any product has hit the streets, Corbin says quality testing and tech support by the manufacturer are vital. Vanco has a testing facility in Chicago where engineers QC test every product before it goes out the door.

He admits the company does not publicize that effort as much as it should. He cites the testing (along with competitive pricing) as the main reason the company's Evolution line of A/V-over-IP products is doing so well among distributors.

From the genesis of a new product idea, like Vanco’s Spot of Dot or its Evolution-branded A/V-over-IP system, to hitting the shelves for integrators to buy can be as much as one to three years, according to Corbin.

“We took an amazing platform (Amazon Echo Dot) and we developed a really cool product for it.”
— Mark Corbin, Vanco

Amazon Echo Dots are used by consumers for control of thermostat, lighting, security and other tasks but the most frequent use of smart speakers is to listen to music. But, unfortunately, the audio quality is lacking, especially for a tiny device like an Amazon Echo Dot.

“So how do we make it a better audio device? We have made a two-gang wallplate that accepts the Dot and allows you to plug in both power and analog audio. Once you plug it in, the Dot sits within a plate. It is built with an amplifier in the back.”

Once the power is connected, the Spot for Dot will power up to four speakers in a room. The topology means integrators can avoid the labor of a home-run multiroom audio system by using the Dot as the centralized source component.

Corbin says even though the Spot for Dot is designed for residential applications, Vanco is seeing integrators install it in commercial environments, particularly in hospitality/hotel projects.

“It is one of those things where we took an amazing platform (Amazon Echo Dot) and we developed a really cool product for it,” comments Corbin.