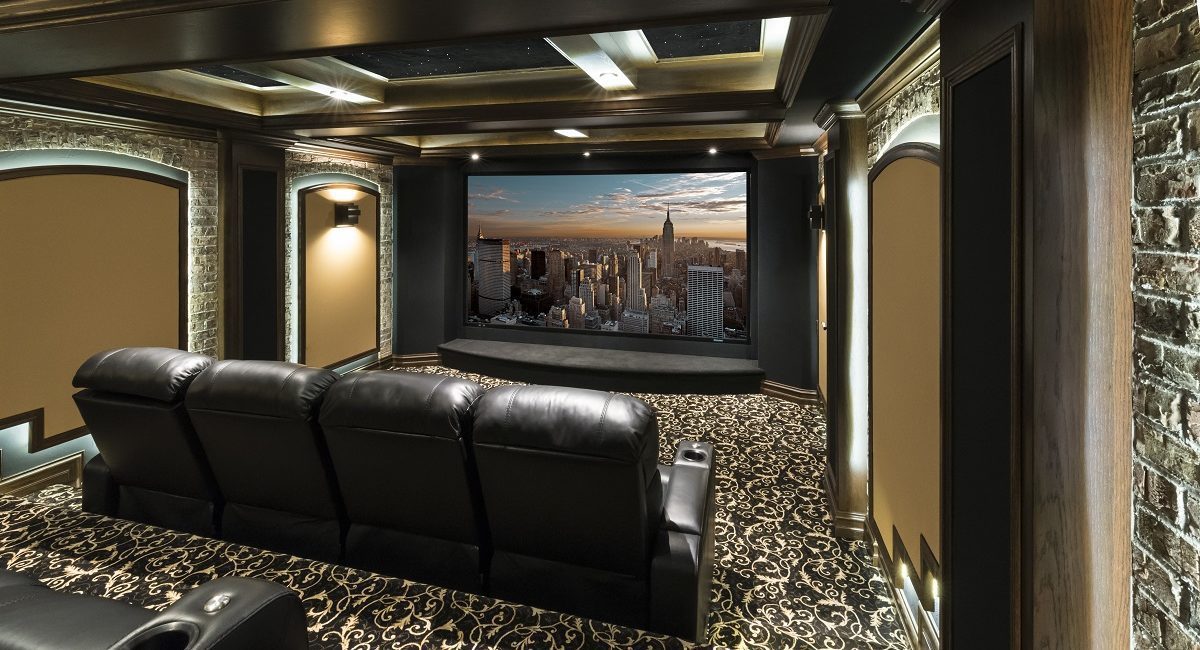 Thanks to an estimated 100,000 watts of colored LED lights, the homeowner can select a specific color for each light or make the entire room glow red, green, purple, and dozens of other colors.

There’s a scene from Tron: Legacy where the movie’s main character comes to Flynn’s arcade, unlocks the door, flips a switch, and wall-to-wall video games spring to life as Journey’s “Separate Ways” blasts through the venue. It’s a memorable scene, and one that has been accurately recreated by the creative home systems integrators from Bespoke Cinemas, Nashville, Tenn.,  in the entryway to a newly constructed home theater.

“The owner of this entertainment space is a huge “Tron” fan,” says Adam Pelz, principal of Bespoke Cinemas. “We knew from the start that our design would follow this theme.” 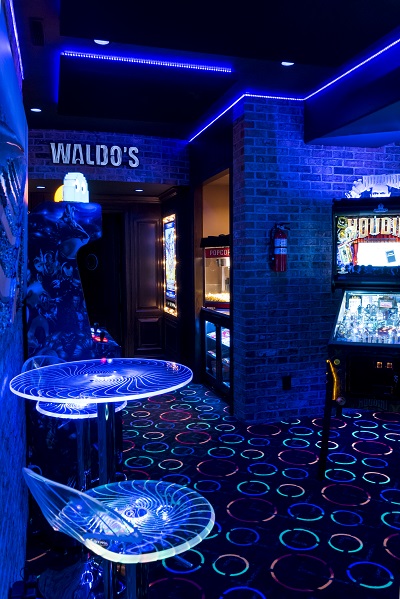 Awash in Tron blue, the video
arcade sets the tone for
movie night.

Relying on a Crestron automation backbone, the team at Bespoke was able to recreate the same effects in the custom-crafted theater as the designers did on the movie set.

The owner walks into the casual living area of his newly finished basement, drops a quarter into a “Tron” arcade game that hangs from a brick wall, and a 2-ton hydraulic door swing open. This launches a 30-second scene as Philips Hue lights activate in sequence, pinball machines turn on in sections, and Journey’s “Separate Ways” plays through built-in Triad speakers.

The room stays in this “Tron-like” setting for about two minutes, then “settles down” for an atmosphere more conducive to watching movies.

Naturally, “Tron” is often the flick du jour – “He watches it at least once a week,” says Pelz.  But the Kaleidescape and Roku servers, plus Sony and Xbox gaming consoles, offer up plenty of other video to consume.

“We went with a 16:9 aspect ratio for the screen because he does a fair share of game playing and sports watching, as well as movie viewing,” Pelz continues. A Barco Balder 4K laser projector completes the video package.

An estimated 80,000 lumens of colored LED lighting adds to the room environment (there is an addtional 10,000 lumens of RGB LED lighting in the home theater area). When “Tron” is on the 138-inch Stewart Filmscreen screen, the owner is able to use a Crestron touchpanel to activate lights around the screen to produce a blue “Tron-esque” hue.

He is also in complete control of LED lights tucked into the coffered ceiling, rope lights, and lights planted underneath the pinball machines. He can select a specific color for each light or make the entire room glow red, green, purple, or any of dozens of color choices.

Read Next: Home of the Year—This Massive Villa Features a Fully-Automated Observatory and Much More

For a typical user, having options of this multitude could be overwhelming, Pelz admits, but for this ex-military pilot, having access to the finer details of the room is appreciated. “He will sit in the theater and arcade and play with the lights for hours.” 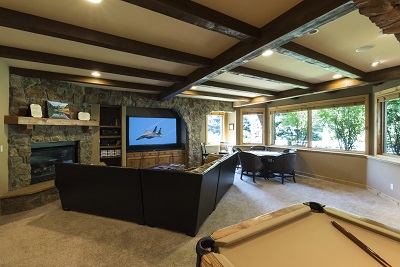 A casual living space offers another place to
relax and enjoy video.

When recreating a movie scene, naturally, the room needs to look the part. This doesn’t mean the owner nor Bespoke skimped on the audio portion of the project.

The space is as comfortable as it is visually stunning. Designer Shawn Byrne of Quest Acoustical Interiors, Bellville, Ill., made sure each element of the lower-level entertainment mecca was on point.

From the dimensions of the room to the fabric applied to the walls, the construction techniques that acoustically isolate it from the rest of the house and the seating configuration, the home theater, arcade and living space embody the look, feel and performance the owner wanted.