From Lutron's patent-infringement lawsuit against Savant: "The aesthetic equivalence of the Accused Ascend Keypads and the design in the ’277 patent is substantial."

Lutron Electonics is suing Savant, accusing the defendant of infringing on patent no. D734,277, which defines a four-button keypad design employed in Lutron's Palladiom product line.

Both companies are leading suppliers of lighting contols and home automation systems.

Below is the raw text of the lawsuit:

IN THE UNITED STATES DISTRICT COURT FOR THE DISTRICT OF DELAWARE

“Lutron”) file this Complaint against Savant Systems, LLC (“Savant” or “Defendant”) because of

attached as Exhibit A.

Lutron invests heavily in research and development to create innovative products and,

along with its dealers, expends substantial resources in bringing these innovative products to their

innovations, and in turn protects that IP diligently in order to defend against unfair competition.

Thus, Plaintiffs allege as follows, based on their own knowledge as to themselves and their

own actions and based on information and belief as to all other matters:

liability company with its principal place of business located at 7200 Suter Road, Coopersburg,

with its principal place of business located at 7200 Suter Road, Coopersburg, Pennsylvania 18036.

3. Savant Systems, LLC is a limited liability company organized and existing under

the laws of the State of Delaware, with its principal place of business at 45 Perseverance Way,

Hyannis, MA 02601. Savant may be served through its registered agent Corporation Service

7. Defendant resides in this District and is a limited liability company organized under

the laws of the state of Delaware.

8. Defendant has a regular and established place of business in this District, including

by virtue of its registered agent for service of process in Wilmington, DE.

9. Defendant has transacted business in this District and has committed, by itself or in

concert with others, acts of direct and indirect patent infringement.

10. Defendant sells and/or induces use of its products in this District through numerous

11. Defendant conducts substantial business in this District, directly and through

intermediaries, including (i) regularly doing or soliciting business, engaging in other persistent

courses of conduct, and deriving substantial revenue from goods and services provided to

individuals in this District, and (ii) using the Savant webpages, “Authorized Dealers”, and other

means to sell goods and services in this District.

12.     Established in 1961, Lutron is the lighting control industry pioneer,

requirements of virtually any residential or commercial project.  Lutron’s success is the result of

its long history of innovation, beginning with its founder’s successful commercialization of the

solid-state dimmer switch used to dim lamps (a generic term for light bulbs of many varieties).

After more than fifty years, Lutron remains a leading innovator and the world’s industry leader in

13.  Lutron’s history of innovation, quality, and success has been widely recognized.

bulbs.  Lutron’s products are also utilized in some of the most renowned locations in the world.

For example, Lutron’s lighting control systems are utilized in such locations as the White House,

the Guggenheim Museum, the Metropolitan Museum of Art, the Bank of China headquarters, and

lighting control device used to dim electric lamps.  This device, often referred to as a “dimmer

switch,” replaced bulky rheostats and autotransformers that were inefficient and unattractive.

15. Lutron is also an industry leader in innovative, ornamental designs of lighting, fan,

HVAC, and shade controls, including keypads, and protects those designs worldwide with design

17. Lutron Electronics and Lutron Technology bring this action as the exclusive

licensee and owner, respectively, of the ’277 patent with all rights to the patent, including the right

to enforce the patent and to recover past, present, and future damages.

18. The ’277 patent helps to protect the substantial investment—including evaluation

of hundreds of prototypes over several years—that Lutron made in its award-winning, clean and

20. One example of the Accused Ascend Keypads is shown below.  It includes metal 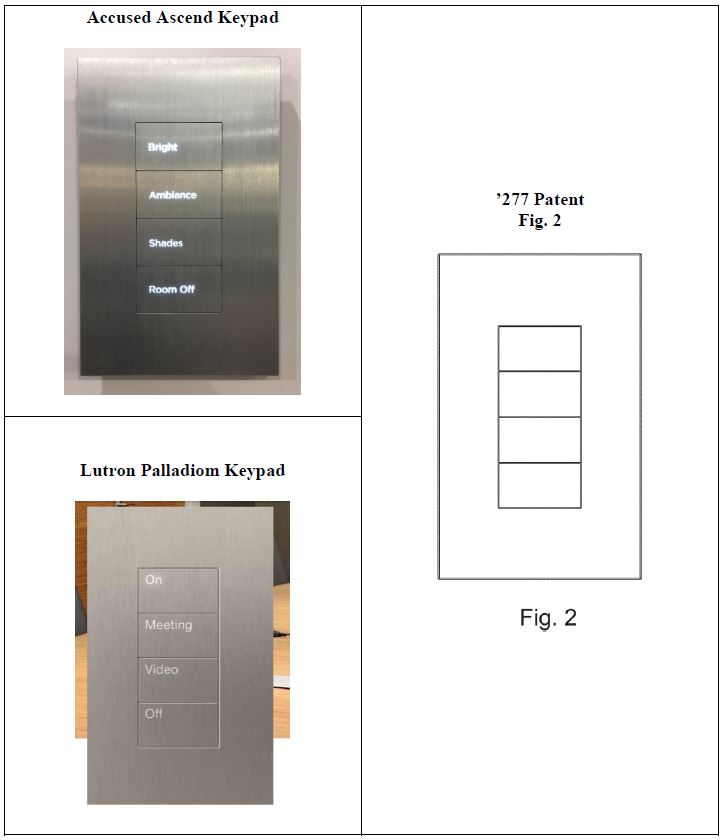 21. Additional views of an Accused Ascend Keypad and the patented design are shown 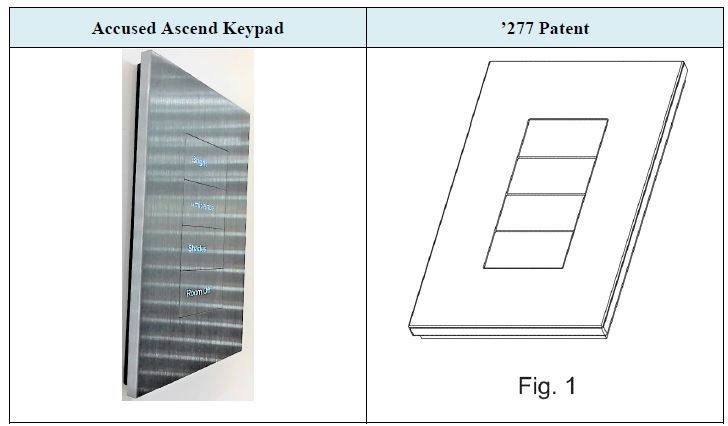 23. The aesthetic equivalence of the Accused Ascend Keypads and the design in the

’277 patent is substantial, particularly in relation to the rest of the industry and in comparison to

24. The Accused Ascend Keypads were observed and photographed on or about

26. The Accused Ascend Keypads are wall-mounted control devices for lights,

dimmers, and other things such as blinds and drapes.

27. The Accused Ascend Keypads include a cover housing with a flat front surface

28.  There are buttons (typically four) provided at the front surface of the housing that

are substantially flush with the faceplate.

29. Lutron incorporates by reference all paragraphs above and re-alleges them as if

31. This patent is based on Lutron Palladiom® keypads.

32. On information and belief, Savant manufactures and/or imports Accused Ascend

33. On information and belief, Savant uses Accused Ascend Keypads in the United

34. On information and belief, Savant offers Accused Ascend Keypads for sale in the

35. On information and belief, each of Savant’s making, importing, using, offering to

36. On information and belief, Savant has applied the patented design to an article of

manufacture for the purpose of using, selling, and/or exposing for sale an article of manufacture

to which the patented design has been applied, without license of Lutron Technology or Lutron

37. On information and belief, through at least the interactive website at

www.savant.com, installation and user guides, and/or through training and instruction, including

at trade shows, Savant has induced others, such as dealers, distributors and end users, to import,

sell, offer to sell, and/or use the Accused Ascend Keypads and otherwise to directly infringe the

38. As a competitor of Lutron, Savant is well aware of Lutron’s portfolio of active

39. Savant has had specific knowledge of the ’277 patent since no later than the date of

filing of this Complaint.

40. Moreover, in light of Savant’s copying of Lutron’s Palladiom 4-button keypad, as

well as its history with Lutron’s keypads, to the extent Savant claims no specific knowledge of the

’277 patent prior to the filing of the Complaint, on information and belief Savant made itself

knowledge of the ’277 patent and with knowledge that the conduct would constitute infringement.

42. Savant’s actions are at least objectively reckless as to the risk of infringing a valid

Lutron patent, and this objective risk was either known or should have been known by Savant.

43. Savant has also indirectly infringed by contributing to the infringement of the ’277

44. Savant has made, imported, offered to sell, and/or sold Accused Ascend Keypads

manner and that have no substantial uses other than uses that infringe.

45. Savant’s direct and indirect infringement of the ’277 patent is, has been, and

continues to be willful, intentional, deliberate, and in conscious disregard of Lutron’s patent rights.

46. Lutron has been damaged as a result of Defendant’s infringing conduct alleged

above. Thus, Defendant is liable to Lutron in an amount that adequately compensates it for such

infringements, which, by law, cannot be less than a reasonable royalty, together with interest and

Lutron hereby requests a trial by jury on all issues so triable by right.

Lutron requests that the Court find in its favor and against Defendant Savant, and that the

a. That Defendant be summoned to appear and answer;

b. Judgment in favor of Lutron that the Defendant has infringed the ’277 patent and that

Defendant’s infringement has been willful;

c. Judgment against Defendant for its total profit in accordance with 35 U.S.C. § 289.

d. A permanent injunction entered against Defendant to prevent any further infringement of

increased, and/or statutory damages, including if necessary an accounting of all damages,

pre- and post-judgment interest as allowed by law, and reasonable attorneys’ fees, costs,

and expenses incurred in this action; and

g. Such other and further relief to Lutron as the Court may deem just and proper under the