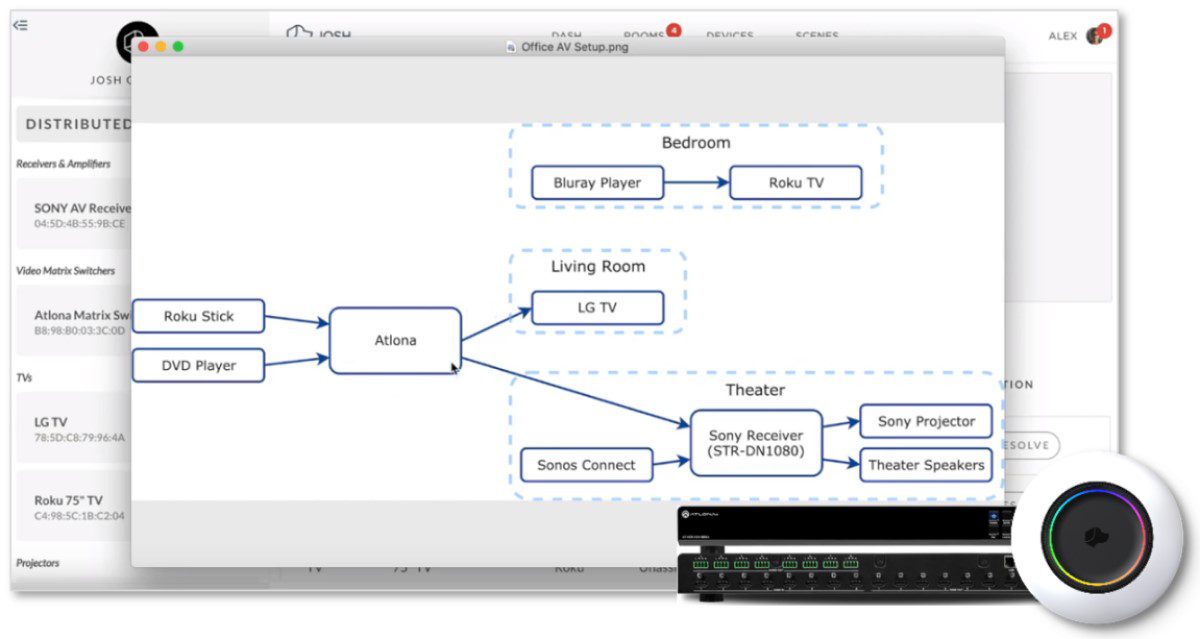 Josh.ai is making it easier to control the TV experience with voice control, allowing consumers to walk into a room, request a show, and leave the rest to the home-automation system.

For example, step into the living room and say, “OK Josh, watch Ozark,” and the TV will turn on in that room, and start playing the requested show. Users don’t need to dictate which room they’re in, or which service streams “Ozark” (Netflix).

Josh does the work on the back end, thanks to new integrations with Atlona video matrix switchers (announced last November), and existing drivers for Roku and select TVs, projectors receivers.

Josh recognizes the location of the user because a Josh Micro voice assistant sits in every room to be controlled.

With Josh Micro, users could already command the system to turn on a local TV (or control lights, thermostat and other local devices), without having to specify the room. It could also deep-link into Roku streamers for accessing specific shows or other content attributes. Now users can do the same thing in a multi-source, multi-room environment.

Previously, for this type of feature, integrators would have to create macros through third-party home-control systems, and then map those macros to commands that could be implemented through Josh (or other voice-control platform).

Even a simple command like, “Watch Dish,” would have to be created in a third-party home-automation system as a macro that would include selecting the source, distributing it to the appropriate zone, and controlling the TV to display the media.

With the Atlona integration, the process happens organically through Josh, the switcher, and native control of displays (via IP or IR through Global Cache).

“The main thing people have been asking for is around making A/V better,” says Nader Dajani, Josh.ai head of business development, in an interview with CE Pro. “Twelve months ago, we started taking that direction.”

Josh.ai was developed initially to operate lights, thermostats, shades and other environmental controls – “the low-hanging fruit,” as Dajani says.

Then Josh moved to custom-oriented home-control systems, allowing “native” control of devices like shades and lighting that were connected to third-party systems such as Savant, Control4 and Crestron – “native” meaning the end devices could be controlled via voice through Josh, without having to create scenes in the home-automation system that could be triggered by Josh.

Now Josh has moved into the more complicated audio/video category, with Atlona being the first partner for zone/source switching. The Atlona integration was announced at CEDIA Expo 2018, as was integration with Crestron DigitalMedia, which is still to come.

“We totally rearchitected Josh to support this,” Dajani says.

It took a grueling year of development to create the new architecture which will make it much simpler to add new A/V sources. In fact, DISH just recently announced full integration with the DISH Hopper family set-top boxes.

The integration will allow users to say, “Watch CNN” or “Go to channel 22,” for example. Users won't have to tell Josh to go to the source and then watch CNN. It would happen seamlessly with a “Watch CNN” command.

As part of the new A/V-friendly architecture, Josh redesigned the integrator set-up flow for A/V systems (above), introducing a new browser-based configuration platform that allows dealers to “set up complicated distributed A/V workflows quickly and without error,” the company claims.

Read the complete press release below.

DENVER, Colorado, January 31, 2019 – Josh.ai continues to expand the impact of artificial intelligence in the home by introducing non-scene based voice media switching. This means that integrators no longer need to pre-program specific media sources and content to specific destinations for voice commands. Josh.ai now natively understands different sources and destinations, which introduces flexibility to enable users to go from room to room and simply ask to turn on a favorite song or show.

For example, clients can walk into their theater and say, “OK Josh, watch Breaking Bad.” Josh.ai understands the request is coming from the theater, powers on the projector, utilizes a knowledge graph to determine Breaking Bad is on Netflix, routes the matrix switcher to select the appropriate media server as an input and sends to the proper output, switches to the appropriate audio source, and almost instantly Breaking Bad is on!

Keeping true to its commitment to intuitive user experiences, Josh.ai has completely redesigned the integrator setup flow for setting up AV systems. Josh.ai introduces a browser-based configuration workflow that auto-discovers audio and video devices on the network. The new interface has been designed with dealers in mind, allowing them to set up complicated distributed AV workflows quickly and without error.

“For a few years now, we have seen an increasing desire from our clients to interact with their technology, especially audio and video, in the most simplistic and personal way possible. Nothing is more intuitive than voice, and nobody is approaching voice the way that Alex and his team are with Josh.ai. I am so excited to be able to extend the possibility of voice control to our clientele and deliver beyond their expectations,” said Ben Lentz from Cyber Technology Group in Scottsdale, Arizona.

New device integrations and capabilities significantly improve the depth of the user experience. Josh is doubling the amount of supported audio and video devices, bringing together industry-leading brands into one elegant ecosystem. With this release, Josh is announcing support for Sony and Barco Projectors, Atlona matrix switchers, and Sony and LG televisions. Below is a full list of ​Integrated Brands and Devices for AV:

Prior to offering distributed AV, Josh served direct endpoint AV systems in single rooms, and could also be programmed with macros from other control systems to channel audio or video throughout various zones. “This new update is a big step forward in allowing us to deliver the most natural voice experience with an amazingly simple setup flow,” says Josh.ai CEO Alex Capecelatro. “It is one of the biggest features that our integrators have requested, and is something that further separates Josh from the mass market solutions. We’re happy to be able to deliver on this vision.”

The new set up process not only enables Josh.ai to handle complex content distribution, but also sets the groundwork for deeper integration with control system partners, including direct AV compatibility with Crestron, Control4, and Savant.

“We're excited to partner with some of the most prominent brands and partners to offer advanced voice control over distributed content,” said Capecelatro. “This is an incredibly important feature for our luxury clients who want the power of distributed systems, with the simplicity of being able to ask for any music or video content in a room and have it play instantly. Our goal with Josh.ai is to deliver a magical experience to the user, and the hard work from our engineering team gets us closer to that vision.”

“The integrated Josh and Atlona solution delivers the magical experience of voice control for luxury AV systems that to this point has been a challenge to attain,” said Joshua Castro, product manager, Atlona. “While this integration clearly addresses the trends we see today in distributed whole-home AV, we also see plenty of value for restaurants, hotels and offices, among other businesses, that want seamless voice-controlled switching and distribution to channel the right AV sources to the right destinations.”