Dirac has redesigned its comprehensive Dirac Live equalization software to make it easier to use on more systems, and with future upgrades now possible.
Robert Archer 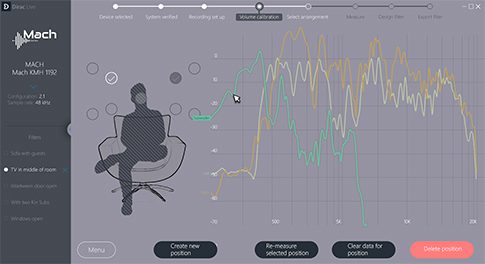 At CEDIA Expo 2018, the company will demonstrate the software’s new interface, system setup and overall performance, according to Niklas Thorin, general manager of high performance audio for Dirac.

“Dirac Live has served as the industry’s reference room correction solution since it was first unveiled over five years ago,” he says. “It established a new standard in room correction technology and allowed home theater systems to achieve a new degree in acoustical perfection.”

Some of the new software program’s new features include a modern user interface that is highlighted by a new setup procedure. The new setup according to the company, moves from more of a technical process that places an emphasis on knowledge, to an app that helps ensure the setup process is done correctly through guidance that confirms the correct action has been taken.

Another feature built into the new room correction program is an improved phase correction algorithm for improved stereo imaging.

Under the old software integrators individually measured the phase of each stereo speaker. The new software analyzes speakers in pairs to help make sure the speakers’ responses a better matched to one another.

Users can customize the software with “Dirac Live Modules,” which will be introduced on a yearly basis to provide integrators with unique room correction capabilities to enable users to tailor the software based on their specific requirements.

“Our modular approach to the future of Dirac Live will allow our platform to forever be equipped with the last and greatest in room correction functionality,” notes Thorin.

“As new features are developed, we can efficiently deliver them to the market as ‘Dirac Live Modules’ so users can customize their platforms based on individuals requirements and use cases. Home theater systems aren’t one-size-fits-all so neither should be their room correction solutions.”

Looking ahead, Agren says Dirac will look to augment the software’s bass management capabilities to include the addition of IP technologies that were developed for its automotive products to help main speakers integrate better with subwoofers.

“We hope to start that [multiple subwoofer option] after CEDIA to demonstrate it at CES 2019,” adds Agren.

“Users and OEMs [original equipment manufacturers] have asked us to do this for a long time.”