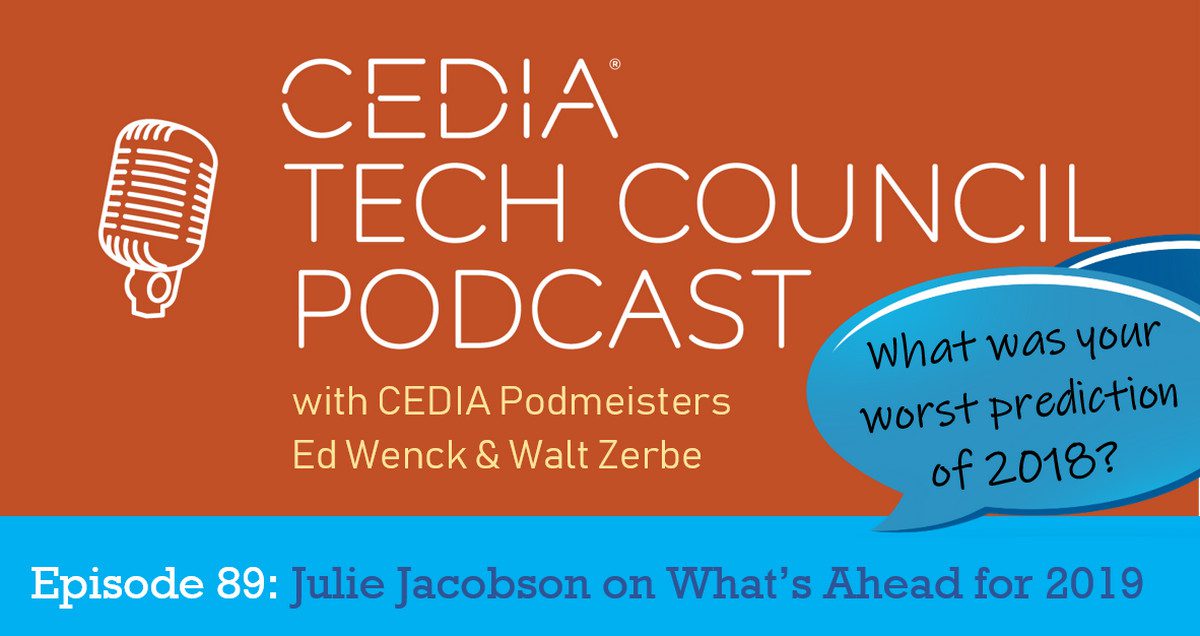 Recently, CE Pro published the Top 5 Home Tech Trends of 2019, featuring promising tech trends like low-voltage lighting and architectural design. In a recent podcast for the CEDIA Technology Council, our resident trendcaster Julie Jacobson joined CEDIA’s Walt Zerbe and Ed Wenck to chat about the coming year and review the home-tech happenings of 2018.

What were Jacobson’s worst predictions for this year? Zerbe asked and Jacobson answered, claiming she was way off base on at least one of last year’s Top 5.

Check out the CEDIA podcast to learn where Jacobson went so terribly wrong.

Here’s what is likely in store for the new year:

Wellness, and more specifically daylight LED bulbs, are something we’ve covered in depth over the last few years, but the technology is still something to keep an eye on.

During her time on the podcast, Jacobson noted that she has personal experience with daylight LEDs, and professes she had an “aha” moment a while back after giving them a shot.

She replaced the bulbs in her office with the new LEDs and immediately felt an energy boost. The problem is, she also had trouble sleeping and ended up having to unscrew the bulbs around 4 PM.

Jacobson was appropriately chastised for her low-tech Circadian system.

Julie’s use of the term “extreme cord-cutting” during the podcast refers to a movement towards “like Crazy Cord-Cutting Town,” she said, when even traditional carriers are helping customers cut the coax.

Dish, TiVo, Spectrum and so many others are heeding the call from consumers begging for convenience and simplicity, rather than (necessarily) cost savings.

“It used to be cord-cutting was to save money,” Jacobson noted. “Nowadays it's easier, it’s more convenient. … Why pay the cable company when really almost every single need can be met elsewhere?”

Cord-cutting is also something integrators can help customers figure out, plus they can sell antenna installations and the infrastructure that surrounds cord-cutting.

HDMI 2.1 eARC (enhanced audio return channel) is something the podcasters agreed would be a big deal in 2019, enabling HDR video and multichannel audio to share a single HDMI cable.

The participants questioned whether integrators should even sell products that don’t support the HDMI 2.1 spec, required for eARC and other new services.

Similarly, AV over IP is something to watch in 2019 – not that it’s anything new, but it’s bound to supplant analog switchers once and for all.

“What’s really big now as opposed to even six months or a year ago is that these products are going down on price and complexity, where the integrator doesn’t have to do a lot of the networking configurations and guesswork,” Jacobson says. “Manufacturers are doing it themselves with software. It’s really making little sense to use traditional matrix switchers anymore.”

Team Jacobson, Zerbe and Wenck covered a variety of other topics during the podcast, from smart plumbing to AI-driven smoke detection to the labor crisis and third-party tech support.