When Mitch Klein isn't helping to foster the adoption of Internet of Things (IoT) via Z-Wave technologies, he can be found playing bass with his Z-Wave colleagues in their band called The Interoperables.
Robert Archer 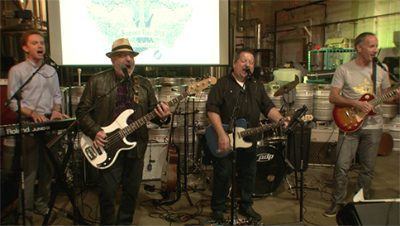 Professionally, things can't be much better for Mitch Klein, executive director of the Z-Wave Alliance.

Earlier this year Klein was recognized for his decades of contributions to the growth of the custom installation market by the CEDIA trade group when it bestowed upon him a Lifetime Achievement Award.

Moreover, during his tenure as executive director of the Z-Wave Alliance, the consortium that promotes the adoption of Internet of Things (IoT), home automation and home control through its wireless technologies has seen its membership grow to more than 700 members that have launched over 3,000 products.

There is more to Klein however, than just the Z-Wave Alliance: Music.

At the age of seven, the drums sparked his musical interest. That eventually led Klein to begin taking guitar lessons. By the time Klein entered high school, he auditioned for the award-winning “Stage Band,” a full 20-piece big band performing in the Maynard Ferguson style of jazz.

The problem Klein encountered for “Stage Band” was there were too many drummers, but he says an opportunity knocked on another instrument.

“They were in need of a bass player, so of course I insisted that I was a bass player and took that role knowing I had never touched one before,” admits Klein.

“Of course I was required to read the charts in order to learn the very complex music. Much to my surprise, the bass I was instructed to play was an orchestral upright acoustic. So I did what I had to and loved every minute of it.”

Klein Branches Out to Play a Variety of Stringed Instruments

At the age of 16, Klein was playing electric bass in a musician pool that performed at weddings and Bar-Mitzvahs all over Long Island, New York and New Jersey.

Most of his fun back then, he recalls, was putting together a 1950s-style greaser band, playing guitar and singing at high school sock-hops.

In college Klein decided the learn how to play the banjo and mandolin in order to play in the country-rock bands around town.

More recently, Klein has played with the CEDIA and the CE Pro All-Star Bands, which have covered classic rock hits from popular bands.

Additionally, Klein also plays bass with The Interoperables, performing with fellow Z-Wave Alliance members at industry events, and wherever anyone will allow him to play.