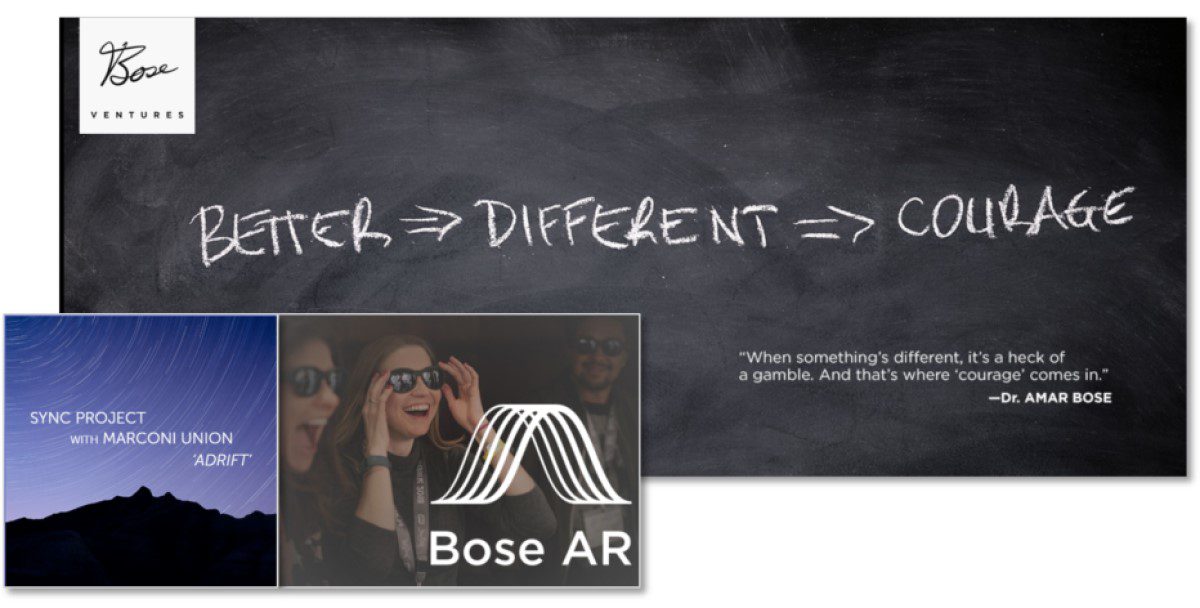 Bose gets serious about augmented reality and health & wellness through acquisitions and investments.

We made brief mention of iconic audio brand Bose in our mega-story of 2018 mergers and acquisitions. The longer version is this: The iconic brand made some really interesting acquisitions and investments last year Bose Ventures, and is expanding its audio innovations into new territories, including augmented reality and wellness.

Expected to ship early this year, the $200 Frames have miniaturized Bose electronics that sit right at the temples, directing “sound at you and away from others,” the company claims.

Here’s what the company says about its AR SDK:

Using raw sensor (accelerometer, gyroscope), head orientation, and gesture data, you can create new experiences for users based on interactions like head gestures for UI or raw IMU data for a variety of applications.

Bose isn’t waiting for the rest of the world to build products for its smart glasses.

But Bose isn’t waiting for the rest of the world to build products for its smart glasses. In 2018, the company acquired Detour, an app by professional tourist Andrew Mason. The app, which narrates walking tours around the world, was discontinued last year after Bose acquired it, but Bose “expects the Detour content to re-emerge and be made available via a new partner.” Mason wrote in a blog.

He added, “Bose is a huge fan of the Detour experience and believes it could be even better as part of the new Bose augmented reality platform.”

In its vision of augmented reality, so to speak, Bose places audio instead of images into context, “so you can focus on the amazing world around you — rather than a tiny display,” said John Gordon, VP of Bose’s Consumer Electronics Division, in a statement last year. “It knows which way you’re facing and can instantly connect that place and time with endless possibilities for travel, learning, music and more.”

Beyond AR, and as a complement to it, Bose is getting busy in wellness. In 2017, the company acquired San Diego start-up Hush, maker of “smart” noise-masking earbuds designed to help users sleep.

In 2018, Bose continued its wellness movement with the acquisition of Sync Project, which is pushing music as medicine.

According to its web site, Sync Project is conducting the “first-ever large-scale studies to measure how the structural properties of music – like beat, key and timbre – impact biometrics such as heart rate, brain activity and sleep patterns. Sync Project is applying machine learning to this dataset to develop personalized music therapeutics.”

ULTIMATE LIST OF 2018 MERGERS & ACQUISITIONS IN CE AND IOT

The company invites users to join them in a “global experiment using music designed to improve relaxation before sleep,” on its site. The service is “designed to respond to your natural rhythms.”

This year, Bose launched SleepBuds, which come preloaded with “sleep tracks” that are said to “mirror” the frequencies of snoring, neighborhood noise, clogs, traffic, and other common background noises.

In related news (kind of), Sonos filed a “really interesting patent application” this year for associating audio with biometric feedback. The patent describes how biometric data like perspiration, heart rate or tone of voice could inform an audio system to play music or other content that is most conducive to the listener’s well-being.

Bose Ventures says it is looking for more investments in the areas of wearables, wellness, audio and AR.